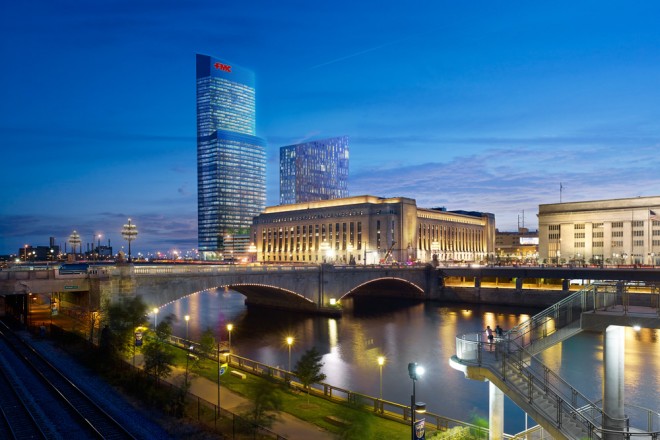 “I don’t know who’s running the city, ’cause all the important people are here,” District Councilwoman Jannie Blackwell said to a laughing crowd eager to wrap up the long list of speakers on hand to mark the groundbreaking of FMC Tower.

The skyscraper, the southern end of University City’s Cira Centre complex that extends north through the first Cira Centre tower, was officially announced as FMC Tower in October, a 47-story, 650′ building. In a media advisory earlier this week, the building’s dimensions had grown to 49 stories and 690′; at today’s event, which Brandywine Realty Trust CEO Jerry Sweeney described as “not a traditional groundbreaking, but a cultivation event,” the official figures reached 49 stories and 730′. That would make it eight feet shorter than the Bell Atlantic Tower—also owned by Brandywine, who has renamed it Three Logan Square—to make it sixth-tallest in the city. Of course by its completion two years from now, the Comcast Innovation and Technology Center—referenced as another indicator of the city’s visible growth by several of the day’s speakers including Sweeney, Mayor Michael Nutter, and University of Pennsylvania President Amy Gutmann—will have bumped it down to seventh. 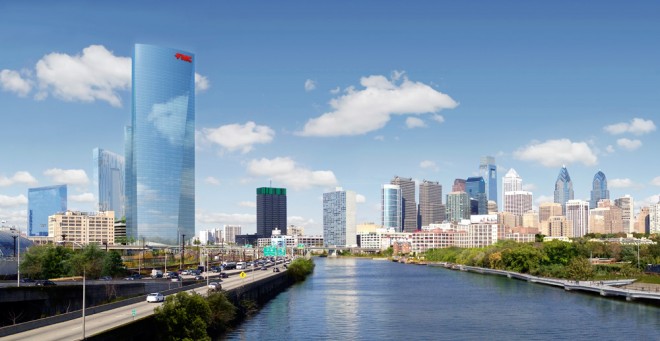 At any rate, FMC Tower is huge. It’s not only 730′ tall, it’s 730′ tall at 30th & Walnut—on a subtle bend of the Schuylkill River where the view is unimpeded across to the Schuylkill Banks, Penn Park, and the classic skyline view, the South Street Bridge.

As new renderings show, that positioning won’t make it simply a part of the skyline, it will make it the skyline’s starting point.

Introducing his lead tenant, Sweeney described the tower’s place on the skyline, saying specifically of the FMC sign at its crown, “it will feature prominently when they pan the skyline on Sunday Night Football when the Eagles are winning.” Taking the stage, FMC CEO Pierre Brondeau said in his thick French accent somewhat believably, “I can’t wait for that football night.”

Brondeau also did the audience the favor of describing exactly who FMC is. Called a “quiet giant” by the Inquirer’s Chris Hepp on Monday, FMC started as a spray pump company in California in 1883; a vintage pump was used to raise a banner revealing the FMC Tower logo at the ceremony today. Later the Food Machinery Corporation (FMC), the company expanded throughout the 20th Century to manufacture a range of products from amphibious vehicles for the defense department to agricultural solutions. One of their current products, soda ash for glass, will go into the exterior skin of the tower—a building showcasing the company’s product much like Rohm & Haas at Sixth & Market and the US Steel, Alcoa, and PPG buildings in Pittsburgh. 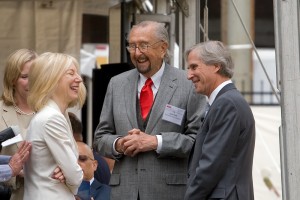 Architect César Pelli, whose Pelli Clarke Pelli firm designed the tower with Philadelphia’s BLTa, seemed downright giddy. Sporting longish hair and a goatee, the 87-year-old legend, whose lifelong portfolio includes Kuala Lumpur’s once-tallest-in-the-world Petronas Towers, Hong Kong’s Two International Finance Centre (that city’s tallest building from 2003-10), and New York’s World Financial Center (built to complement the twin towers of the World Trade Center on New York’s skyline), said, “the sun has been shining on me and shining on Philadelphia. [With this,] Center City and University City become one—the Schuylkill River will just be an event in the middle, like the Seine [River in Paris].”

Speaking to the blue book audience of dignitaries, developers, architects, and academics, Mayor Nutter said, “the only thing better than a groundbreaking is a ribbon cutting,” expected to take place in 2016. 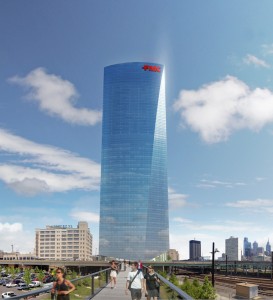 Like the first Cira Centre, opened in 2005, FMC Tower transforms its shape depending on one’s perspective. From the east and west, the tower’s sharp angular cuts heavily recall the first Cira for a slender profile. From the south—especially from the ramp leading up to Walnut Street from Penn Park and from the South Street Bridge lookouts—the wider form accentuates the building’s height even more. A modest curve on the south façade will create a tonal gradient and sunset glint surely to be the subject of many a photograph. At ground level, the glass façade is raised to reveal support columns and emphasize the building entrances in the same manner Evo does next door. That 33-story, 430′ tower, designed by Erdy McHenry Architects (whose principals Scott Erdy and David McHenry were in attendance), is topped out and nearing completion. Between the two, the one-acre Cira Green will place an elevated park atop the massive parking garage already situated between Walnut and Chestnut, 29th and 30th.

Reflecting on the decade-long process and collaboration with Brandywine (and BLTa), Pelli said with no shortage of joy, “this project has been a succession of dreams.” With a vintage pump raising a 50′ banner and midday fireworks, the dreams of an FMC Tower and a completed Cira Centre South complex took the first step toward reality today.

A new web site has been created for the tower, and it includes a full gallery of renderings. Visit fmctower.com HERE.