Frank Shuman: Finding The Future In Tacony, A Century Ago 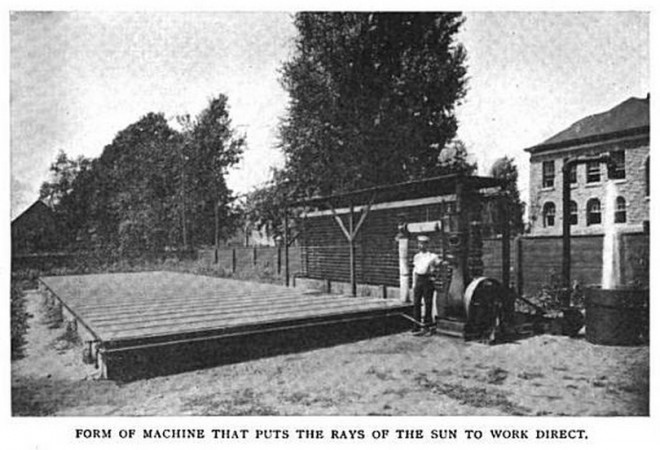 Once upon a time in Tacony, Frank Shuman developed a system to capture the sun’s energy. To the right, you can make out St. Josaphat School behind the worker | Photo: Technical World magazine, September 1907

Nearly a century ago, Philadelphia solar energy pioneer Frank Shuman toiled in obscurity, dreaming–and building–a solar powered device he felt would change the way the world made energy and did work. This weekend Cosmos host Neil deGrasse Tyson wants to share his story of an alternate future with about three million viewers. 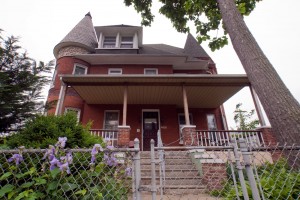 At Disston & Ditman, a layer of forward-thinking history lies beneath a neighborhood veneer | Photo: Bradley Maule

Cosmos: A Spacetime Odyssey, the reboot of the Carl Sagan classic, has thrust the normally staid fields of astrophysics, geology and genetics into primetime with unexpected success. Increasingly, the show has intensified its criticism of science-phobes, creationists, and well-heeled climate change deniers but Sunday/Monday night’s episode, “The World Set Free,” will mount its fiercest takedown of those immune to the realities of anthropogenic climate change.

The episode begins on Earth’s scorching sister planet, Venus, amidst its nightmarishly nebulous sulfuric acid and carbon dioxide atmosphere—an opaque soupy glaze fueling a greenhouse effect on steroids. As Cosmos viewers know, the show is adept at probing the decisive moments in our planetary history, elucidating how at pivotal points the right mix of forces conspired to create or destroy elements of our known universe. Yet the penultimate episode foregrounds a decidedly human choice: whether we have the collective will to alter our planet’s inexorable warming. One possible outcome, quite unsubtly, will be Venusian.

Developed in Northeast Philadelphia’s Tacony neighborhood in the early 20th Century, Shuman’s “Sun Engine” is a poignant reminder that while humanity has been slow to reduce our greenhouse gas emissions, we have certainly not lacked the technology, or foresight, to do so. On the expansive lawn between an ivy-covered house and workshop at Disston and Ditman Streets, Shuman integrated his deep knowledge of glass, optics, and convection heating to create a powerful array capable of doing actual work. 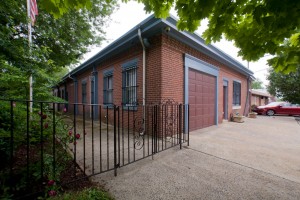 Not a native Philadelphian, Shuman was drawn to the city’s vibrant ecosystem of inventors, tinkerers, and mechanics. Born in Brooklyn, he skipped college to dive right into science, taking the position of chemist at an aniline dye company in West Virginia at age 18. In 1891, after Shuman had patented a wire glass system that made skylights of the Victorian day safer, his uncle Frank Schumann—who kept the non-anglicized spelling of his German immigrant father—recruited him to Philadelphia, where the elder Schumann was the president of the Tacony Iron & Metal Works. Specifically, Uncle Frank hired Nephew Frank to develop an electroplating process to fuse coats of aluminum on the surface of the 37′ statue of William Penn the shop was casting, to protect it from pollution 548’ above the street atop City Hall. Concurrent to developing the process, Shuman’s American Wire Glass Manufacturing Company opened for business with the financial backing of Jacob Disston and W.L. Elkins. The electroplating and wire glass processes were so innovative that Scientific American magazine published articles on each within two weeks of each other in 1892; they were also successful enough that Shuman left employment to focus full-time on his inventions.

Shuman, a consummate inventor with 64 patents to his name, closely followed international developments in solar power. In 1906, he set the controls for the heat of the sun. In his small Tacony compound, he insulated boxes, built semi-convex reflectors around them to concentrate the sun’s rays, put them on swivels to follow the sun’s track, placed his water in a vacuum to lower its boiling point and—in a major breakthrough—attached a low pressure steam engine to the array. 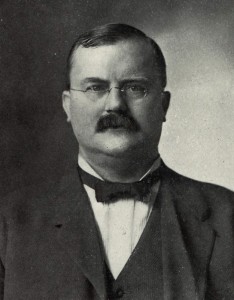 “Yours truly, Frank Shuman,” 1907 | A handout Shuman personally distributed; courtesy of the Historical Society of Tacony

By 1910 Shuman was aggressively proselytizing sun power, staging public relations gimmicks like running a small toy train on vaporized ether and urging the press and investors to view the device on any sunny day. A 1907 letter he wrote to Judge Thomas South, an influential Central Police Court magistrate and Philadelphia Republican power broker the Evening Bulletin dubbed the “Father of Tacony” in his obituary, pleading for assistance in drubbing up support and press attention sits in the Historical Society of Tacony’s extensive Shuman file.

Eventually, his stumping paid off and British investors commissioned him to construct a massive array in sunny Egypt to assist with irrigation of cotton fields. During 1912-13, Shuman and his Sun Power Company strove to break the British government’s costly addiction to coal power, constructing their working engine at Maadi, now a suburb of Cairo.

In the early 20th Century, Philadelphia was an unlikely seat of solar technology; arguably for most of the 19th Century, the city was an R&D hub for fossil fuel utilization as well as a primary consumer of coal and producer of refined oil products. Beginning in the early part of the 19th Century the two seats of scientific wisdom, the American Philosophical Society and Franklin Institute popularized new techniques and methods of burning the ever-abundant anthracite coal. Soon, with the creation of the Schuylkill Navigation and later, the Reading Railroad, the city became a massive tidewater entrepot for coal. Railroads, factories and private residences all fired the supposedly clean burning anthracite and its sooty geological cousin, bituminous coal. By 1906, Philadelphia had passed its first pollution control ordinance, prohibiting the emission of smoke of “certain degrees of darkness” from its numerous stacks and chimneys. 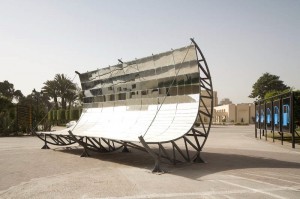 For Shuman, to fail to embrace solar power was to invite social calamity. The problem was simply mathematical: there are finite resources like coal and oil whereas the sun’s power was infinite. The supply of coal and oil, he opined, would eventually be depleted. “One thing I feel sure of,” he wrote prophetically in a 1914 Scientific American article, “is that the human race must finally utilize direct sun power or revert to barbarism.” Based on the output of his device, he reasoned that an array covering 20,250 square miles in an unpopulated portion of Africa’s Sahara Desert would produce the same amount of energy as all of the coal mined in 1909. Displaying an understanding of the social value of solar, he urged “…all far-sighted engineers and inventors to work in this direction” not only for their own profit but “the eternal welfare of the human race”.

Frederick Blount Warren, writing for Technical World Magazine in 1907 after a visit to Tacony, was more expansive in tabulating the benefits of solar: “And now, suppose a moment is given to contemplation of the changes that will have been wrought when solar-power has been developed as fully as the steam engine is at the present time… Mankind might then begin to receive its birthright of an uncontaminated atmosphere, health and purity would once more find a foothold in the constitutions of future generations….” Engineering News profiled Shuman in 1909, Nature magazine did so in 1912, and in a 1911 feature, the New York Times proclaimed [a] “Method to Harness the Sun is Found; Engineer says that Frank Shuman of Philadelphia has solved the problem.” 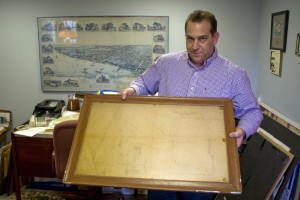 Cosmos’ incorporation of Shuman’s project is an encouraging rehabilitation of his life’s work. With success in Egypt proving ephemeral—the First World War refocused everyone’s priorities—Shuman’s notoriety soon faded. But ask Lou Iatarola, a Tacony civic leader and head of the Historical Society of Tacony—the chief repository for all things Shuman—and he’ll tell you how the inventor’s stock is steadily rising.

“Here it is 1910 and this guy’s figured out how to make energy from the sun, but everyone is skeptical,” says Iatarola at the Society’s offices in the carefully restored Tacony Music Hall. “When we started the Historical Society, no one knew who Shuman was, but in the years since, a lot of people have come by to learn more and make him better known.” Cosmos‘ interest in Shuman reflects the recent uptick in inquiries.

In 2008, two sustainability-minded Swiss artists, Christina Hemauer and Roman Keller approached Iatarola with a request for background materials. Researching his Egyptian project, they sought to reconstruct a segment of the Egyptian array for the Cairo Biennial. At the actual site—now an upscale Cairo neighborhood—they created an info kiosk interpreting the complex. A bilingual English-Arabic book Sun of 1913 was also produced. Unfortunately, Hemauer and Keller have lost track of their re-creation, after the events of the Arab Spring left communication with their storage company in disarray.

Likely, Shuman’s role in the Cosmos narrative will be to embody possibility: the great hypothetical “what if” a man in one of the grittiest, fossil fueled cities in the industrial northeast could dream of severing our ties to carbon-based fuels? It was perhaps as unlikely that the highest art of solar power would be practiced in Philadelphia as the city would one day aspire to be the “greenest” in America.

In this vein, Shuman should be an inspiration for our civic creativity.  As the city strives to project itself beyond the sum total of its structures, socioeconomic fissures, and impoverished natural environments, there is perhaps no better manifestation of this noble drive toward a greener future than in Tacony’s Frank Shuman.

Cosmos: A Spacetime Odyssey, “The World Set Free” (Episode 12) will air on Sunday, June 1 at 9pm (EDT) on Fox and Monday, June 2 at 9pm on National Geographic.