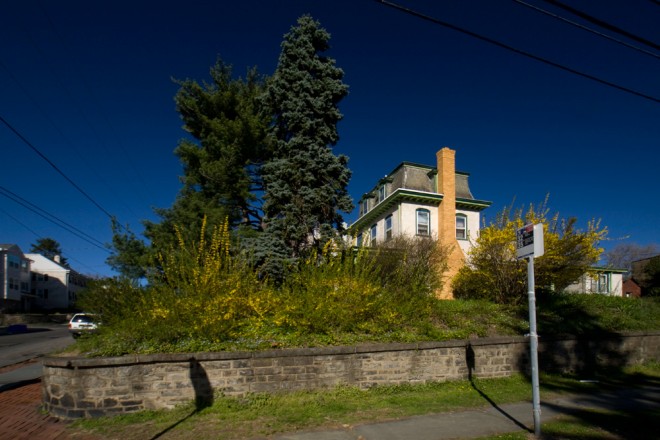 Generally speaking, when you’re trying to win over a neighborhood you’re trying to convince to okay demolition of a historic property, you probably want to show up to the meeting where you’re expected to meet your case. But Todd Joseph, who wants to demolish 365 Green Lane in Roxborough, forgot about last night’s monthly meeting of the Central Roxborough Civic Association (CRCA)—a staffer reached him by phone in Pittsburgh—and was therefore a no-show.

The sad affair of the Bunting House has proven a lesson learned for Roxborough residents concerned with the historic fabric of their neighborhood. That circa-1880 home, on the corner of Ridge and Roxborough Avenues, was demolished over a year ago and the developers’ plans to replace it with a Wendy’s have stalled. The Zoning Board of Adjustments (ZBA) okayed the developers’ plans for a takeout restaurant, but denied a drive-thru window on the already-congested corner. Wendy’s won’t build without a drive-thru and the developers are stuck with an empty lot until they can find a resolution. They’ve appealed the ZBA’s decision and have a court date for it in June.

Composite of six-home proposal based on renderings by DCV Architect, accessed via CRCA

With 365 Green Lane, the developer Joseph wants to demolish the single home and replace it with six-to-eight townhouses. To do that, he’ll need to get the ZBA’s approval, as the home was rezoned RSD-3—single family dwelling—during a CRCA-led process to protect larger, older homes after the Bunting House debacle. And to get the ZBA’s approval, he’ll have to contend with passionate neighbors who want to save another old house from the wrecking ball.

In Joseph’s absence, CRCA President Don Simon took a vote anyway: 0 in favor, all opposed. The unanimous nays hope to preserve the Second Empire house built by William Raynor in 1871 and first inhabited by industrialist Benjamin Kenworthy. The neighbors largely see the home as the gateway to Roxborough. Situated prominently on the corner of Manayunk Avenue, the home is set back from the street above a wall of Wissahickon schist, with porches fronting both Green Lane and Manayunk Avenue. It’s a handsome vista to those traveling up steep Green Lane from Manayunk (where the street continues across the Schuylkill River to ramps to I-76).

It’s one of a number of homes built in the mid-to-late 19th Century a committee is hoping to designate as the Leverington Historical District. Many Manayunk and Roxborough mill owners and businessmen built their homes on the area’s avenues: Shurs Lane, Roxborough Avenue, Leverington Street; 365 is one of nine homes on Green Lane in consideration. In July 2013, genealogist and architectural historian John Manton began researching the various homes to prepare a nomination, but Joseph submitted his demolition application before the nomination could be submitted to the Philadelphia Historical Commission (PHC). PHC generally has a custom of recusing itself from reactionary matters, such as designating a home for which a demo permit has been filed. Hidden City was unable to reach Executive Director Jon Farnham for clarification by the time of publication. 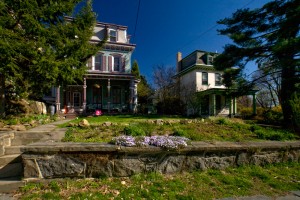 Under the name 1801 CBM A to H, LLC—for Cecil B. Moore (where he’d previously developed homes similarly) A-to-H, as in “homes A through H” (i.e. 1 through 8)—Joseph purchased the 3,305 sq ft house for $200,000 in December from the family of the late Millicent Berghaus, who owned the home with her husband John for over 50 years. A report by Carrie Hagen last month for Newsworks said that Berghaus’ family only wanted to sell the home to someone who would preserve it, and that Joseph’s camp assured them that would happen. Likewise, Roxborough attorney Hal Schirmer sent Joseph a letter explaining the RSD-3 zoning.

Nevertheless, Joseph applied for demolition and submitted plans to build the homes on the property, plans which were denied in February. An appeal was expected at the ZBA on Wednesday, May 14, but as the developer did not show at the civic association meeting, he has still not met City-mandated requirement to meet with neighbors. Schirmer said the ZBA will continue the appeal until after a meeting occurred. CRCA President Simon indicated that Joseph would be invited to the organization’s June meeting.

Having already blown off one meeting, he faces an uphill battle to sway unanimously opposed neighbors, and that hill on Green Lane is awful steep.