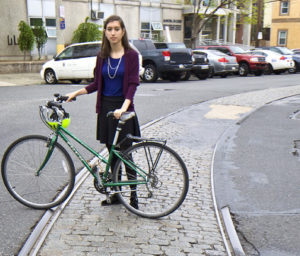 Katie Monroe, Women Bike PHL coordinator, Bicycle Coalition of Philadelphia. She’s standing at the site of her accident, the intersection of 11th and Reed in South Philadelphia | Photo: Peter Woodal

Trolleys haven’t traveled along Route 23 for more than two decades, but the line’s steel tracks still run from deep South Philadelphia along 11th and 12th Street, then up Germantown Avenue all the way to Chestnut Hill. For city bicyclists, that’s one very long line worth avoiding. Unlike most trolley routes both active and dormant, the #23’s tracks run where cyclists normally ride, between traffic and parked cars. Tires can get caught in the grooves or slide on the smooth metal if you’re not careful–and occasionally even when you are.

The Bicycle Coalition of Greater Philadelphia’s Katie Monroe experienced firsthand just how dangerous the tracks can be in December when she fell at the intersection of 11th and Reed streets. Although Monroe rode perpendicularly across the tracks, her tires slipped from underneath her as she leaned slightly to the left while making the turn. Despite wearing a helmet, Monroe broke her jaw and shattered five teeth.

Monroe’s accident galvanized the Bicycle Coalition into action, and now five months later, the Mayor’s Office of Transportation and Utilities (MOTU) is working on a plan that would pave over the Route 23’s highest-volume intersections in Center City, starting this summer or by fall at latest. It’s a far cry from the complete trolley track removal that bike advocates have long asked for, but SEPTA’s limited budget for discretionary capital expenses called for a modest plan, said MOTU chief of staff Andrew Stober.

Plus, Stober points out, the Route 23’s tracks can be avoided for large parts of a commute. “You don’t have to ride down 12th street; you can ride down 10th. But you can’t avoid the trolley tracks when you’re crossing 12th street or 11th street. So that’s one of the reasons we came to covering the intersection,” he said. 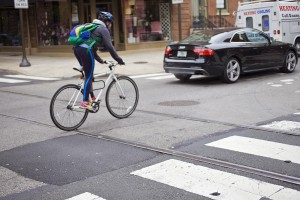 There is one group, however, that would prefer to leave the tracks intact: trolley advocates who hope the Route 23 will someday be restored to service. To their way of thinking, MOTU’s plan to pave over parts of the trolley infrastructure makes it less likely that the line will one day be resurrected.

When SEPTA shut down the Route 23 (along with the 15 and 56) in 1992 for what the transit agency said would only be a temporary suspension of service, it was a tremendous loss for trolley lovers. The Route 23 was the longest line in the city and, according to some accounts, the longest in the world. It was also the busiest route, and passed through some of Philadelphia’s most colorful and historic neighborhoods.

“SEPTA would like us to forget about (electric) trolleys and trackless trolleys, and buy the pretense that diesel buses are “green,” said local trolley advocate (and Hidden City Daily contributor) Mike Szilagyi. “Asking SEPTA to cover the trolley tracks is something I’m sure they’d welcome. It’s playing right into their hands, and it’s a shame.” 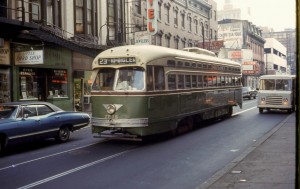 Although SEPTA did return the #15 line to service on Girard Avenue in 2005, MOTU’s Stober said restoring the #23 isn’t likely anytime soon. The problem, he said, is that updating the tracks and creating new, wheelchair-accessible stations would cost too much.

SEPTA officials would not comment on the plan to pave over the intersections, although SEPTA spokesman Andrew Busch did confirm that the agency would meet this week with MOTU and the Bicycle Coalition. “The cost and the funding for possible improvements to the roadways, that’ll all be part of the discussion,” said Busch. “These meetings are a step to move that process along. I won’t be able to say right now what that definitely means.”

Monroe said the roll out of a Bike Share system next spring adds some urgency to the situation. There will be an influx of inexperienced riders, and the Route 23 line runs through the middle of two high-traffic bike share “zones.”

There is no data to show how many biking accidents occur as a result of trolley tracks–bike accidents that don’t involve a motor vehicle aren’t reported to the police as crashes–but Monroe cites her own conversations with cyclists, as well as a 2012 Toronto study on trolley tracks and bike safety, as proof that the Route 23 line presents a serious problem for bikers. 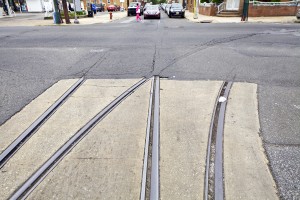 The intersections where Snyder Ave. crosses 11th and 12th St. have already been paved over. | Photo: Peter Woodall

“Accidents due to trolley tracks are probably the most underreported type of crash. We know anecdotally that it happens all the time,” said Monroe. “We estimate that one-third of bicycle accidents are caused by trolley tracks.”

So while it’s true that a 2013 data map from the Bicycle Coalition of Philadelphia shows several other streets that look more dangerous to peddlers, it is important to keep in mind that that data is accounting for car-and-bike accidents, not bike-and-track ones.

The safety issues presented by the tracks were serious enough to sway Tony DeSantis, president of the Delaware Valley Association of Rail Passengers. “We don’t object to fixing the roadway so that bikers can use it,” said DeSantis. “I don’t want to start a war with bikes. Their safety is a serious concern to us. I just would like to see something to keep the tracks.”