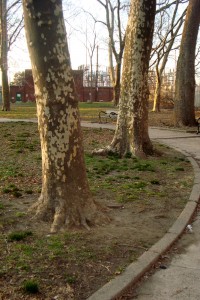 In a February 28 meeting, the Philadelphia Department of Parks and Recreation, in association with the Friends of Penn Treaty Park, unveiled plans for a new playground at Penn Treaty Park—plans that called for chopping down six of the old growth sycamore trees in order to accommodate the new playground. Ironically, it would be modeled on a “woodland” theme, complete with plastic tree stumps, presumably to memorialize the living, breathing, 120-year-old trees proposed to be removed.

Over the past several years, around $300,000 in funds has gone toward Penn Treaty Park renovations from state, city, and various other sources including PECO and the Penn Treaty Special Services District, whose funds consist largely of donations from the SugarHouse Casino. This funding is the first actionable step toward realizing a vision set forth in 2009 to transform Penn Treaty Park and modernize its presence as a riverfront destination.

Spearheaded by Parks & Rec with support from the Friends of Penn Treaty Park, this funding is only Phase One in the implementation of the Penn Treaty Park Master Plan. Phase One details renovations to the north side of the park, which contains the park’s playground as well as its stand of old growth sycamore trees. The full $8.5 million Master Plan was produced by Studio Bryan Hanes with the dual aim to protect the site’s ecological sustainability while transforming the space into a major waterfront locality. 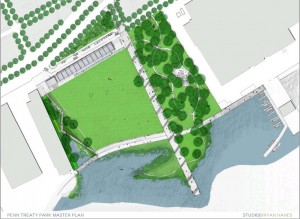 Circa-2009 plans by Studio Bryan Hanes, accessed via PlanPhilly 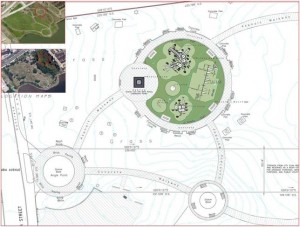 Revised, circa-2014 plan for Penn Treaty Park | Image via Department of Parks & Recreation

However, as so often happens between vision and reality, plans changed. Between the 2009 visioning and today, a revised plan came about for Phase One implementation. Money may have had something to do with this; while the original master plan called for about $485,000 to be spent on the playground’s renovation, the city has currently earmarked only $300,000 for it, according to Naked Philly. Aesthetics may have also had something to do with it; Friends of Penn Treaty Park president AJ Thompson remarked that the original plan’s playground had “nothing for children to play on, just rocks.” In response, the original architect Bryan Hanes stated that the concept for the playground was akin to the Sister Cities Discovery Garden (which his firm designed), where kids found “plenty of ways to play” that were both exciting and beneficial and more than just “a swingset and stepping stones.”

Hanes expressed concerns that the city would “build a fast park” that lacked the innovative features regarding ecological sustainability. On the other hand, Thompson said in June 2013 that the play area could be refabricated “by next spring.”

According to Hanes, the new plan, created by staff of the City Department of Parks and Recreation, used “a more detailed survey” in order to “work around existing trees and low spots,” and that “nothing they are doing compromises the intent of the original Master Plan.” But some park advocates wonder why the new plan appears to call for cutting down six of the old-growth trees in the park. In the original community outreach survey done in 2009, the top four “treasured” elements of Penn Treaty Park had to do with its natural setting and time-honored importance: the river, the history, the view and, of course, the trees.

While it is clear that the planning process has been long and complicated, it appears that the new plans for the playground are now moving quickly ahead.

A March article about the Penn Treaty playground plan in the Northeast Times spurred the formation of an organization called the Philadelphia Tree Huggers, an advocacy group for trees and other local flora in and around the city. The organization produced an informational video* expressing concerns about cutting down the Penn Treaty Park trees. It discussed the vital natural and historic role played by the old-growth trees and drew attention to the fact that apart from posts on the Friends of Penn Treaty Park Facebook and web pages, no additional outreach was performed regarding this issue. The Tree Huggers’ stance was that it was discussed “essentially” behind closed doors for those who were not friends on Facebook or did not know of the Friends webpage.

(*DISCLAIMER: The author of this story provided writing services for the informational video produced by the Philadelphia Tree Huggers.) 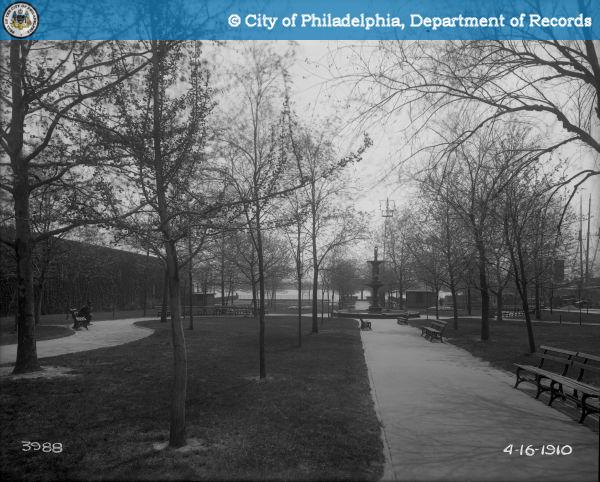 Penn Treaty Park, 1910, showing young sycamores that would be removed in new plan | Photo via PhillyHistory.org

The Tree Huggers received an endorsement from noted Fishtown historian Kenneth Milano, who said that, “the history of the park shows that it was always a fear that the park would become just another playground in the Department of Recreation’s inventory. The place is a sacred place, a peaceful place, what’s wrong with just some benches, the river, grass and trees? [The] idea of not taking down the Sycamores is spot on…”

According to Milano’s book The History of Penn Treaty Park, the original Treaty Elm was protected from logging and industry during the Revolutionary War and through the 1700s until its fall in a storm in 1810. The history of the modern Penn Treaty Park begins in 1893, when the space was dedicated as a public park and historic site. The sycamores that now tower over the park were planted then, more than 120 years ago.

From the beginning of the process of building a park on this site, development on and around the park proved to be a sticking point for residents. The City of Philadelphia lost a quarter of a million dollars in 1910 due to opposition to building an immigration center adjacent to the park. Later, the community quashed plans to build a two-story recreational and commercial pier as well as plans by PECO to demolish the existing pier.

However, by 1949, the park had fallen into disrepair due to lack of funds and city interest. Thanks to the efforts of State Rep. Miles Lederer, $75,000 was granted in perpetuity to care for the park. It was placed specifically under the care of the Fairmount Park Commission rather than the Bureau of Recreation because, as Milano’s book states, Lederer did not want the park to be “just another playground,” but instead to be a historic site with the focus kept on honoring Penn’s treaty—a site of not only city importance, but state history as well. 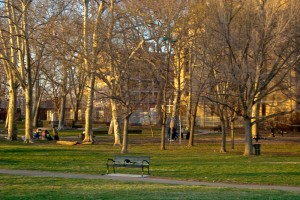 View from the river looking back toward the grove of sycamores | Photo: Greg Alden

In the 1980s, residents founded Friends of Penn Treaty Park, a volunteer organization charged with helping to allocate funds in service of the park. This all-volunteer group saw increasing influence in the late 1990s and has to this day played a crucial role in maintaining the park. The group organizes events, clean-ups, fundraisers with the goal of making the park a destination.

Following the production of the video, there were two public comments regarding the planned removal of the trees. The first occurred at the May 1st Tammany Day Celebration, where members of the Tree Huggers spoke to neighbors about the controversy regarding the trees. People expressed widespread concern and lack of knowledge of what was taking place.

The second occurred at the monthly meeting of the Friends of Penn Treaty Park on May 5. At this meeting, the founder of the Tree Huggers, Greg Steele, and Friends president Thompson butted heads slightly. Steele stated that there were many members of the community concerned about the trees and that they did not receive fair warning about the plans; Thompson replied that the Friends website clearly states when meetings happen and that any and all community members were welcome to attend. His position was that bringing money to the park required moving forward, and that “if some [old-growth] trees have to be martyrs for progress, then so be it.”

The new playground plans represent the largest sum of money to date that has been considered for a single-time development at Penn Treaty. Steele notes that plans to remove the trees are at “a vastly different scope than organizing an event or clean-up at the park. We are talking about changes that cannot be undone and will last for generations to come.” 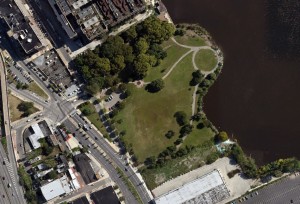 Penn Treaty Park aerial view: six of the enormous trees on the upper side of the photo would be removed for the new playground | Image: Google Earth

That the meetings were public and publicly available knowledge was not a point for dispute. However, for many people, removing trees for the sake of a playground was not only unconscionable, it was apparently happening without their knowledge. Some sort of problem clearly existed in terms of communication between the City’s Department of Parks & Recreation, the Friends, and the broader community of those invested in the park’s future.

It has been suggested that the permanent and large-scope nature of the proposed changes should have required the landscape architect hired by Parks & Rec for the plan that diverged from the Master Plan to conduct best practices for community outreach.

While public budgets of thousands or even tens of thousands of dollars may best be handled by a smaller, more nimble organizational process, those consisting of hundreds of thousands or millions may require a much more comprehensive approach in order to ensure that the entire community’s voice is heard.

For those concerned about the state of the new playground and the fate of the old sycamores, it is always a good idea to communicate with those involved, show up to meetings and voice your concerns. Meetings of the Friends of Penn Treaty Park take place monthly on every first Monday at the Shissler Recreation Center; a calendar is listed on their web site HERE.

Marlon MacAllister Marlon MacAllister is a novelist and freelance writer/editor living in South Philadelphia. His first book, a gardenpunk scifi novel called Garden Enclave, is being shopped by an agent and seeking publication. Read more about it at marlonmacallister.com.