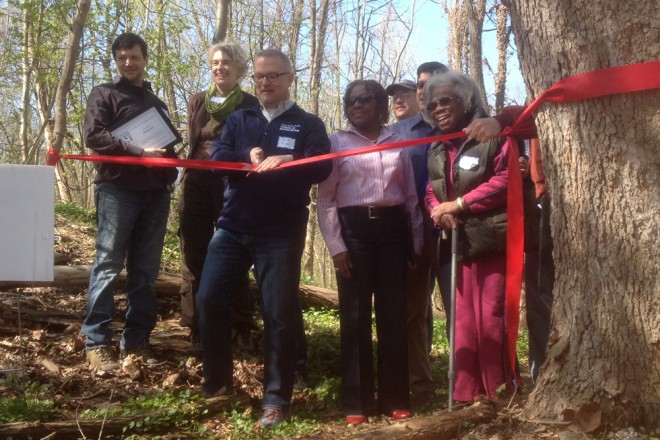 With a ribbon cutting ceremony and three hour cleanup on Saturday, dignitaries and neighbors officially welcomed the Wissahickon East into Philadelphia’s Parks and Recreation system. The event formalized a hard fought victory for the East Mt. Airy coalition whose will made it happen, the culmination of 20 years’ persistence.

The six-acre plot of land, previously privately owned, was transferred to the City for inclusion in the park system last fall. The green space straddles the banks and floodplain of Cresheim Creek, whose 2.7-mile journey begins on the other side of Stenton Avenue in Montgomery County and passes through here on its way to Devil’s Pool and Wissahickon Creek.

For years the space, whose primary access point is at relatively secluded Woodbrook Lane and Anderson Street, was used as a dumping ground. On Saturday, volunteers cleared the creek of litter, debris, and washed out logs impeding the natural progress of the creek from that entry down to the trestle carrying SEPTA’s Chestnut Hill East Line. Among the items removed were several large tires, a hot water heater, a refrigerator, and a car.

The land had been owned by DeSouza Brown, a developer based in Bala Cynwyd whose work has been primarily in the Harrisburg and Lehigh Valley areas. After years of condo proposals that never happened—and a historical easement in 2006 protecting the land from development—DeSouza Brown finally donated the land to the City in October 2013. 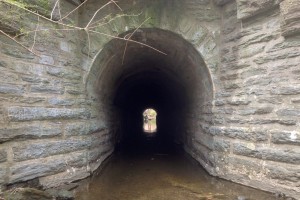 At the western end of the parcel, Cresheim Creek passes through a culvert under SEPTA’s Chestnut Hill East Line | Photo: Bradley Maule

That easement was the result of the efforts of the Wissahickon East Project (WEP), a band of neighbors embodied by treasurer Dr. Arlene Bennett, a psychiatrist who’s lived in the neighborhood for 50 years. “It warms my heart to see this today,” she commented to a crowd just as proud to be with her. “In 15, 20 years, we can look back to this as the day we made it happen.”

Echoing her sentiments were district Councilwoman Cindy Bass, State Representative LeAnna Washington, and Parks and Recreation’s top officials, Mike DiBerardinis and Mark Focht, who worked in concert with WEP to navigate procedure and bring the parcel into City property. Focht did the honors of cutting the ribbon, flanked by the elected officials as well as WEP representatives, members from the East Mt. Airy Neighbors and Wissahickon Valley Watershed Association, and Friends of the Wissahickon executive director Maura McCarthy.

At present, a small diamond-shaped trail leads from the street to views overlooking the creek, and eventually elaborated trails will extend through the parcel. And some day, the park will include part of an uninterrupted Cresheim Trail, which currently follows the banks of Cresheim Creek from better known Wissahickon trails and terminates near the Chestnut Hill West Line at Cresheim Valley Road. That trail will continue past that train viaduct and over the trestle at Germantown Avenue (next to the Trolley Car Diner), out a right-of-way currently owned by PECO, all the way out to Fort Washington State Park.