Windows Into An Artist Surge Near Temple 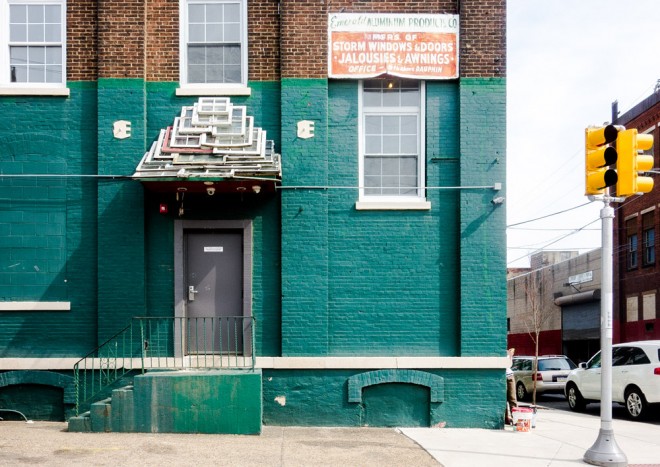 Paul Stone openly believes in the free market. It’s unsurprising then to discover that he, the co-owner of the manufacturing company Emerald Windows, began repurposing sections of its facility as Window Factory Art studios in 2010 after artists asked for space. He had the supply to meet their demand. What is surprising is that the factory, at Ninth and Dauphin Streets, is in a neighborhood long besmirched by the market. 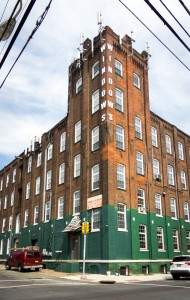 Stone’s company, which he runs along with business partner James Cho, installs “historically accurate and energy efficient” windows in some of Philadelphia’s most prominent historic residences. His work actually led him to the art studio adaptation.

“We had done windows in an artist’s home, and then she and her friend asked if we had space available here,” he says. The transition continued, Stone believes, in part because of Temple University’s relocation of Tyler School of Art in spring 2009 to 12th and Diamond, just a few blocks from Emerald Windows.

Martin Hileman, owner of Wayne Mills in Germantown—a similar model of industry-art coexistence—shared that his impetus to create artist studios also came from outside himself. “A building up the street where they had artist lofts was closing, and a gal came to me and asked if we had space. We did,” he says. But currently, Wayne Mills only has three studios, and because demand for manufacturing space remains high in his building—on top of the space needed for his commercial weaving business—he does not plan to add more artist space in the foreseeable future.

Unlike Wayne Mills, though, the Window Factory can draw from an art school just blocks away. While that doesn’t exactly mean the building is populated exclusively by Tyler students, it does count some Temple grads among the tenants, and the studio space jibes well with the school’s nearby presence.

More over, Stone bases a lot of the continued demand for space at the Window Factory in the relationship his business has developed with its own neighbors. “It’s generally pretty positive,” he says, much due to his own commitment to the people living where he works.

When neighbors complained after a rowdy party at WFA in summer 2013, Stone took action. With complaints including noise and partygoers urinating on neighbors’ cars, he evicted the host. And currently, he employs two immediately-local residents at Emerald Windows with a larger employee base from across North Philadelphia. 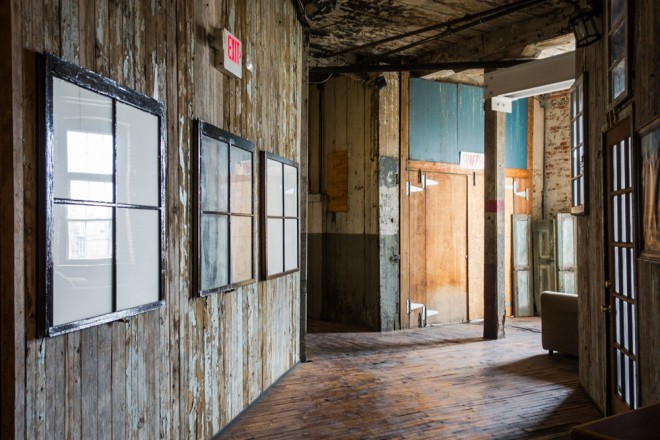 All those windows help keep the lighting bill down | Photo: Theresa Stigale 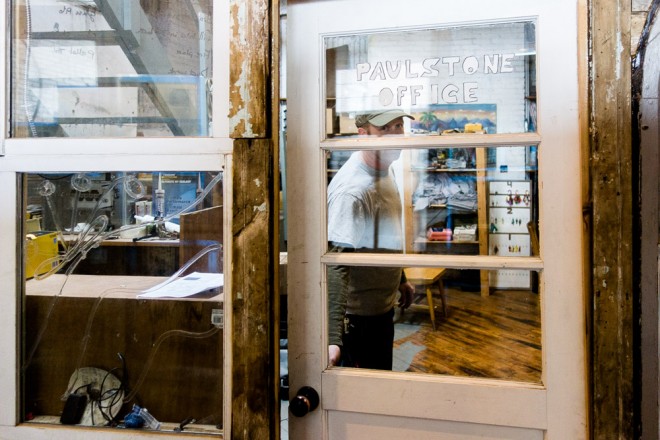 Though it has called North Philly home for over 50 years, Emerald Windows’ name actually carried over from an older location, its original site on Emerald Street in Kensington. The business shifted to Dauphin Street in the 1960s, when owner Perry Wolf purchased and converted the larger space from textile manufacturing to that of windows. Prior to that, Eclipse Needles and Shirts Manufacturing occupied the building, dating back to the turn of the century. 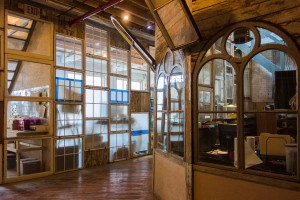 The visually striking modern spaces in the studio building—the use of windows as walls—comes more from thrift than from aesthetics. “We were just trying to find a way to separate their stuff from our stuff as quickly and easily as possible,” says Stone. Forty-five studio spaces later, the building is an Alice in Wonderland maze of naturally lit corridors of windows.

But getting it to the present state has been challenging, made more difficult by a change in the regulatory climate since 2012, when the City’s Department of Licenses and Inspections began to pay more attention to artist conversions. Notably, last fall inspectors shut down the Viking Mill in Kensington (which has now reopened); months before that they clamped down on Emerald.

“Originally, they were just happy to see something happening in this building,” Stone says. After all, the place had almost burnt to the ground in 2002 when a first floor fire nearly consumed the structure. Charred beams on the first floor ceiling serve as a constant reminder of the risk for flames in old industrial buildings. In spring 2012, L&I inspectors presented Stone with a long list of building violations that are now slowly being rectified, including a $160,000 sprinkler system, $30,000 fire alarm system, and $90,000 of continued electrical upgrades. Their next court check-in is on April 26th.

WFA serves a diverse population, both in the types of art and the artists’ backgrounds. Tenants include the studios of Mural Arts founding artist and collagist Theodore Harris, musician Jonifin Marvin’s Worldtown Sound System, and mythologist-curator Li Sumpter. Sumpter, daughter of acclaimed sculptor Philip Sumpter, leads community engagement efforts between the building and the neighborhood as Emerald’s co-director of curatorial projects and strategic planning.

“At one point we had a connection with the Mural Arts Restorative Justice program, and we are always looking for new ways to connect to the community,” Sumpter says. On Stone and Cho’s role in the neighborhood, she approves. “They get it,” she nods matter-of-factly.

She also speaks with caution about safety issues in the neighborhood, including her own experience ducking during a shooting one block east of the Window Factory during summer daylight hours in 2013. “We can be friendly to people, but it doesn’t stop the violence,” she says. 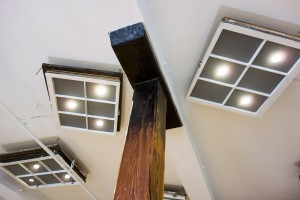 Remains of a 2002 blaze in the building are still visible | Photo: Theresa Stigale

Stone has a vision beyond the Window Factory, too. He and Cho recently purchased and began renovations on the circa-1907 school at St. Edward the Confessor at Seventh and York Streets. (The school’s parent church, which has separate owners, was one of Hidden City’s ten significant vulnerable churches last year.) The former school will be transformed into an artist live-work studio building.

“We’re filling a need, but we also have concern for the existing people here to be okay.” Offering an example, he states, “we’d like to see better food options.” It’s another area where, sooner or later, the supply will have to catch up to the demand.