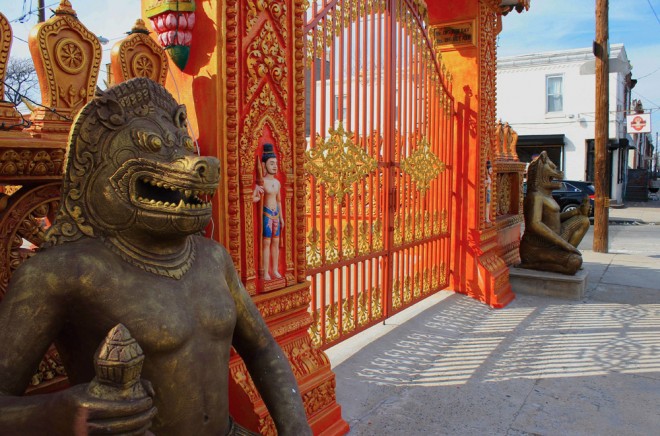 The corner of Sixth and Ritner is beautiful and disorienting. Rising up from the sagging, ashen row homes of deep South Philly, the Preah Buddah Rangsey Temple bursts into the foreground with a crackling intensity. The colors are brilliant and foreign; a fortress gilded in high-definition. It is an eye watering shock from an otherwise washed out landscape and a sight to be seen. Out of all of the Buddhist temples in South Philly, this one makes its presence most known.

Housed within the former Saint Andrews Lutheran Church, the temple’s gated exterior was constructed to resemble the traditional gold-drenched, Dvarapala-flanked temples of Cambodia. When the Khmer Buddhist Humanitarian Association purchased the church in 2003 it was on the verge of collapse. The foundation was sinking, the roof was caving in, and the courtyard a dismal overgrown lot. Built in 1904, Saint Andrews sat on the market in a terrible state of ruin. After roughly eight years of intensive rehabbing, the temple is now 90 percent new, funded exclusively by its members. The sea of hardwood floors that cover the three stories of the temple were all rebuilt and finished by the resident monks. The first floor is used primarily for dining and celebration, the massive two-room second floor for prayer and meditation, and the third floor is devoted to the monks. 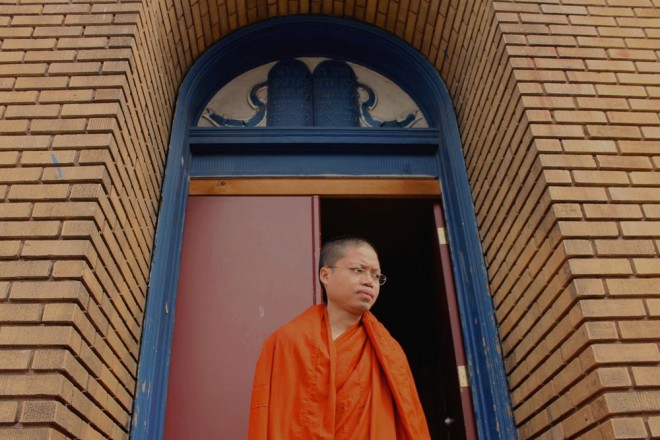 The Preah Buddha Rangsey estimates around 4,000 members. “We are the biggest temple in Philadelphia,” says Muni Ratana, chief monk of Preah Buddha Rangsey Temple and President of KBHA. “Members also come from Camden, Cherry Hill, and Harrisburg where there is no temple.” Ratana mentions that the temple also serves members from the Chinese, Vietnamese, Laos and Thai community as well.

As vast as the interior of the temple is, it quickly reached capacity after officially opening in 2005 and the KBHA acquired the former Adath Shalom synagogue across the street. The synagogue has weathered the years much better than its neighbor. Without much structural renovation, it is currently being used for community meetings, funeral ceremonies, and monk quarters. Although mostly converted, there are still traces of the old shul. Entering the main worship hall there is an unintended fusion of Buddhist and Jewish iconography. Underneath a faded ceiling mural of Zodiac signs and Hebraic inscriptions hang the glowing centerpiece murals of the Buddha, painted by the temple’s resident artist and University of the Arts graduate Eang Mao. On the second floor, behind the former women’s gallery stands rows of mahogany and glass encasements housing individual memorial cubbies to temple members who have passed away. Outside, the stairs leading to the entrance are fortified with Cambodian lions while the doorway is still overseen by a cerulean blue concrete relief of the Ten Commandments written in Hebrew.

It’s one week before the Cambodia New Year and the massive halls and courtyard are unnaturally silent, soon to be broken with the hum of chatter and celebration. Cambodians moved to Philadelphia throughout the 1980s and 90s to escape the Khmer Rouge and the lingering horrors of the Killing Fields. Pol Pot’s decimation of temples, of traditions, and of entire families left Cambodian émigrés with little to rebuild on their own. “Many people lost everything. Some people live alone here. The Temple is their home,” says Ratana. “It is a place for culture but also to belong to a family. It is a place for hope.”

The temple serves many functions in this regard. Not just a place for worship and cultural preservation, it also provides social services, human rights protection, language and computer training, and charitable outreach for all of its members. 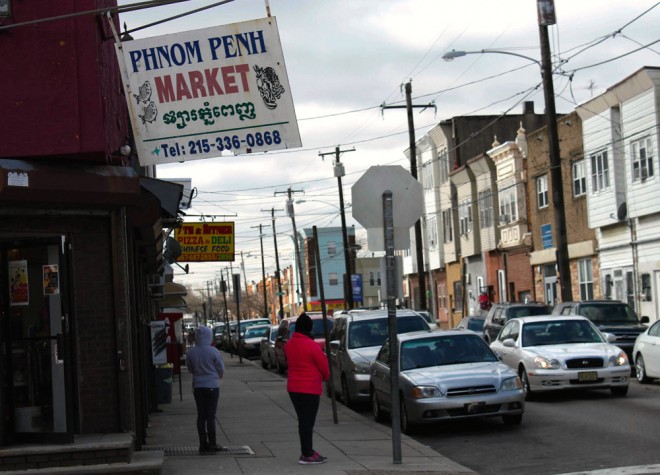 Walking around the neighborhood it becomes evident pretty quickly that the area is transitioning. Mifflin Square Park almost looks safe enough to nap in. Signs declaring “New Phnom Penh” adorn restaurant and little grocer entryways. “Since the monks came to live here, the temple has created a safe place for the community. Before, as soon as the sun went down they were shooting and attacking and killing in the park across the street. The bad stuff has reduced to less than 10% since we moved here,” says Yun Or, Vice-Chairman of the Khmer Buddhist Humanitarian Association.

The quiet transformation is affecting. There is an air of approachability within the blocks surrounding Sixth and Ritner. People smile. They offer to explain to you what how to prepare the odd looking Khmer vegetable you just bought on a whim. It is a heartening reminder that while you can never go home again, there will always be somewhere to build a new one.