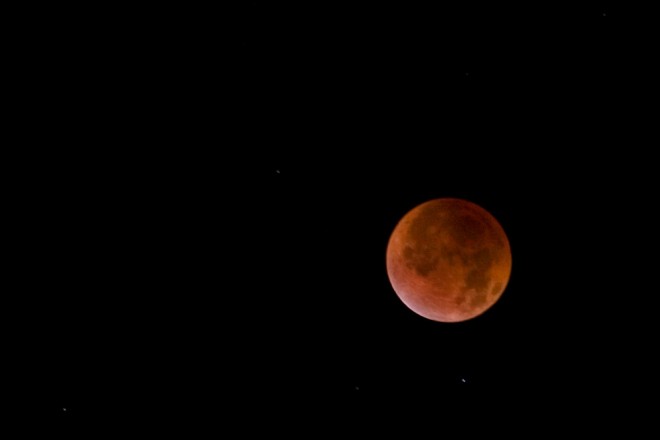 As though the prospect of filing one’s taxes warranted additional omen, universal forces cast their shadow immediately onto this year’s IRS deadline, with a total lunar eclipse to start less than an hour into April 15th, 2014. Beginning at 12:55am and lasting almost till dawn, a blood red moon will color the southwestern sky tonight—weather permitting.

Unfortunately, that sole condition is a major one, and it doesn’t look good for Philadelphia. Accuweather’s current hourly forecast shows cloudy skies all night, with rain coming in the 2-3am hour—just as the eclipse sets into totality. The total eclipse starts at 3:08am and lasts through 4:23, with the peak—the deepest darkest red with the earth’s shadow in the center of the moon—happening at 3:46am.

Nevertheless, even if the threat of rain spoils an overnight viewing party for those already planning on going to work late on Tuesday, it’s worth a shot to set the alarm on the off chance there’s a break in the clouds. And if there is, The Franklin Institute’s Chief Astronomer Derrick Pitts offered the following tips for best viewing with Hidden City via email.

• You can view the eclipse from any place with a good view to the southwest.

• There are no ‘deadly eclipse rays’ to fear. There is no harm in observing a total lunar eclipse directly with the unaided eyes, as opposed to solar eclipses, for which special eyewear is required. 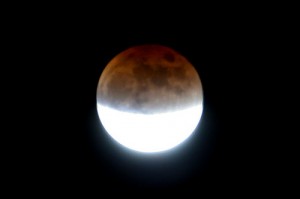 Pitts also mentioned that, at the time of peak eclipse, when the moon will be three-quarters across its nightly path (in our southwestern sky), the star Spica, the brightest in the constellation Virgo, will accompany the moon at its 4 o’clock position, with the planet Mars just to their right. Saturn is more distant, but also visible to the left of the moon.

But again, it’s all dependent on whether Mother Nature allows us the simple pleasure of even a partially clear sky. In the event that weather doesn’t cooperate tonight, we’ll have three additional chances over the next year and a half. The next one, on October 8th of this year, will be fleeting as the eclipse coincides with the moon’s setting at sunrise. Next year, the orbits align similarly with lunar eclipses on April 4th, 2015 (also in progress at moonset) and September 28th, that one visible in its entirety.

So, stargazers and skywatchers, cross your fingers and look up, way up, overnight tonight. If nothing else, rain or shine, Derrick Pitts observes, “this’ll be a nice break for those real procrastinators that started their tax returns around 11pm Monday evening!”

Though the forecast looks bleak, it’s still worth checking out additional resources on tonight’s lunar eclipse such as the guides provided by space.com and earthsky.org.