Throwbacks In The Sanctuary 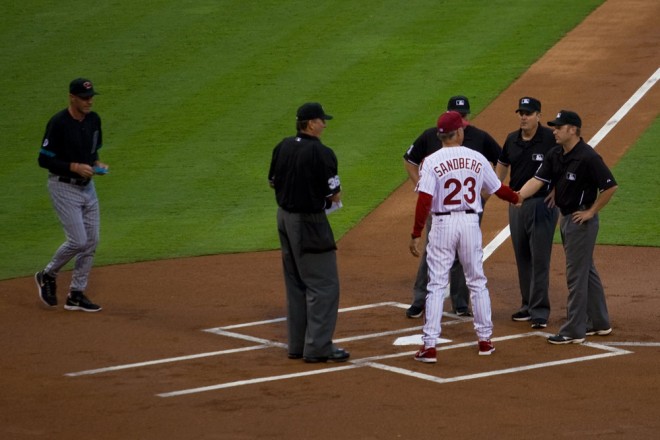 With the 2014 season of dread officially underway at Citizens Bank Park following a home opener that featured three homeruns from celebrated PED user Ryan Braun, the Phillies are trotting out in their beloved bloodstripes. The Phils have worn the current version of their uniform since 1992, a year before the beards, bellies, and biceps brought the improbable spotlight to The Vet. But the current unis are of course only the latest variation for a 131-year-old franchise, and as pictured above from last season’s 90s Night against the Diamondbacks, the Phils occasionally treat their fans to a blast from the past.

Mitchell & Ness Nostalgia Company, the Philadelphia merchandise institution, knows its way around a Turn Back the Clock. In 1988, Major League Baseball made the company its exclusive partner for the manufacture of its Authentic Cooperstown Collection, the throwback jerseys made even more popular by the likes of Jay-Z and Outkast, each of whom have shopped at M&N, now on 12th Street just above Chestnut. The partnership grew largely out of the painstaking research efforts of M&N President Peter Capolino.

This evening, Capolino will share his expertise on the art and design of baseball uniforms at the Fleisher Art Memorial. The talk will cover not only the evolution of baseball uniforms, graphics, and typefaces, but also that of the textile industry and athletic fabrics. Naturally, as a partner of the hometown nine—the Mitchell & Ness Alley Store has been located on Ashburn Alley since the WFC 2008 season—Capolino will give specific attention to the Phillies. (No word on whether Capolino will get into the bacon-and-Santa incarnations of the Phils’ AAA affiliate IronPigs.)

The program is part of the Fleisher’s Sanctuary Series. It begins at 6, and it is free. For more information and to register, see the event page HERE. To see John Kruk in a pillbox hat and a photographic evolution of the Phillies’ uniform, go HERE.