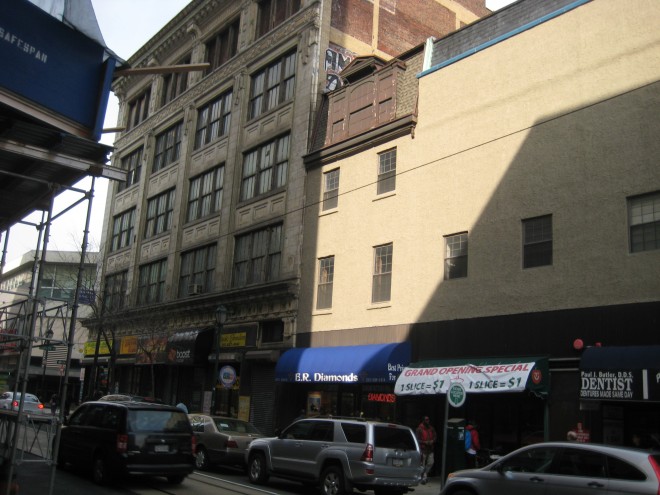 Current view of the first block of South 11th Street, site of the Downbeat Club. The club was on the second floor of 23 South 11th, what is now the E. R. Diamonds store, with the blue awning. Photo by Jack McCarthy

Last Call at the Downbeat, currently playing at Society Hill Playhouse, takes a dramatic look at a 1942 engagement by jazz trumpeter Dizzy Gillespie at the Downbeat, a legendary Philadelphia jazz venue. Written by local author and jazz vocalist Suzanne Cloud, the play recreates an extended gig Gillespie had at the club beginning in late 1942, a pivotal time in Dizzy’s career and ultimately an important moment in jazz history. Discarding key elements of the popular swing/big band style in favor of a more esoteric, musically challenging approach, the new jazz style taking shape would soon be known as “bebop.”

In November 1942 Dizzy Gillespie had just left Lucky Millinder’s big band—partly he was fired and partly he quit—and promptly secured an extended engagement at the Downbeat. The club, on 11th Street just below Market, became popular with jazz musicians in the 1940s and was known for both its progressive approach to music and its tolerance of an interracial clientèle. It was the sort of place where Dizzy could test and develop new musical ideas, laying the foundation for his rise to stardom as a bebop pioneer. Last Call at the Downbeat captures all of this excellently, through its use of period music, historical images, and most importantly, its portrayal of Dizzy himself at this critical juncture. 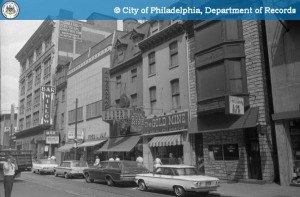 1965 view of east side of South 11th Street, south of Market Street. The Downbeat Club was located on the second floor of the Willow Bar, adjacent to the five-story building on the far left. Image via Phillyhistory.org

The Downbeat (not to be confused with the more famous jazz club of the same name in New York City) was the brainchild of local music impresario Nat Segall. Born in 1910 and a musician himself—he played sax in local dance orchestras in the 1930s—Segall loved jazz and sought to promote it in Philadelphia. In 1938, he opened a small jazz club at 1627 Ranstead Street with his friend and fellow musician Billy Krechmer. The partnership didn’t last long, however, and sometime around 1938 or 1939 Segall opened the Downbeat. Situated on the second floor of 23 South 11th Street, above the Willow Bar on the ground floor, the Downbeat was strategically located just steps from the rear stage door of the Earle Theatre at 11th and Market Streets. The Earle was where all the big name jazz artists of the 1930s and 40s performed, and its proximity to the Downbeat naturally led to these stars stopping by to jam between sets or after their shows at the Earle. A true musicians’ club, the Downbeat became the place in Philly to hear bebop. Dizzy’s seven-week engagement there in late 1942/early 1943 was one of many appearances at the club by established and rising jazz stars of the time.

Nat Segall also branched out to concert promotion, staging high-profile jazz concerts in the mid-1940s at the Academy of Music featuring top jazz musicians like Gillespie (by then a star) and Charlie Parker. These concerts were attended by many aspiring Philly jazz musicians who would themselves become stars in later years, such as John Coltrane, Benny Golson, and Jimmy Heath. Golson recalls the time that he and Coltrane waited for Charlie Parker after one of his concerts at the Academy and walked with him to a jam session at the Downbeat, the two young saxophonists peppering Parker with musical questions along the way. Golson and Coltrane were too young to get into the Downbeat, so they stood outside on 11th Street listening to the bebop sounds coming out of the second floor window. 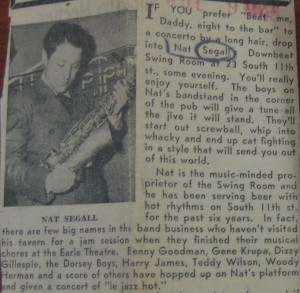 Nat Segall, pictured in a July 9, 1945 Philadelphia Inquirer article on the Downbeat Club. The article lists many of the jazz stars that appeared at the club. Courtesy of Temple University’s Special Collections Research Center, Urban Archives.

Segall’s partner in presenting the jazz concerts at the Academy was Bob Horn, another local music promoter who in the early 1950s would become the first host of the popular teen dance TV show, Bandstand. (Horn would later become involved in a scandal that led to his firing from Bandstand and replacement with Dick Clark.) Both Horn and Segall would become active in rock and roll in the 1950s and also serve mentors to another budding music impresario, Jerry Blavat, later Philly’s beloved “Geator with the Heater.” In fact, Segall served as Blavat’s manager for many years.

Segall gave up the Downbeat sometime around 1948, after harassment by the police. Newspaper accounts of the time reveal a city-wide crackdown on underage drinking and other vices in Philadelphia. The Downbeat was raided several times in the mid to late 1940s and Segall and his staff were arrested for serving alcohol to minors. From reports in the papers, it does seem that minors were being served at the Downbeat. However, from other sources it appears that there may have been larger forces at work.

Authorities apparently did not like the fact that blacks and whites were fraternizing at the Downbeat and wanted to put a stop to it. DownBeat magazine, the major national jazz publication of the time (and no relation to the clubs of that name), ran a story in January 1949 on the raids at the Downbeat in Philly. Under the headline, “Downbeat in Philadelphia Raided Again,” the story notes:

“A preholiday raid by… detectives… once again smacks of racial prejudice on part of the law enforcers… [The] Downbeat is the favorite hangout for the be-bop fans and is the only downtown spot which never has discriminated against Negro patronage. In fact, crowds here have been interracial in character, attracting everybody from the intelligentsia to the rabid be-bop fan.

Nat Segall, former owner of the Downbeat who originally established the room, gave it up a year ago rather than give in to certain political powers who urged he adopt a segregation policy for the room. When he refused to give in, Segall, a former musician now in the booking business, was pestered by police raids and finally sold out.

Charges of underage drinkers at the Downbeat, basis for the raid, is a weak one when you see the patronage of purity-white places… you’ll find teenagers any night of the week in practically every night club in town.”

So ended the story of one of Philly’s legendary music clubs, a key place in the development of jazz in the city. To capture some of that ambiance, go see Last Call at the Downbeat. The performance runs this Friday and Saturday night, with a final performance scheduled for Sunday afternoon.