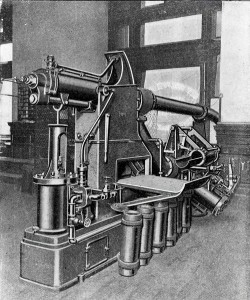 John Wanamaker, that platitudinous Presbyterian, who Mark Twain described as an “unco-pious, buttery, Sunday school-slobbering sneak thief,” was also what we would call today an “early adopter” when it came to new technology. In 1878 he outfitted his Grand Depot with the first indoor electric lights in America; in 1880 it was the first department store in the country to use pneumatic tubes.

During his tenure as Postmaster General, Wanamaker advocated for creating a pneumatic system for carrying mail based on his experience at the Grand Depot. Philadelphia’s pneumatic tube system was built in 1892, with Wanamaker himself performing the inauguration at 4:18 pm on March 1, 1893. At the 323 Chestnut post office, he placed a Bible wrapped in an American flag into a canister that went flying (underground) to the Central Post Office with a loud “whish”.

Wanamaker sent a message with the package reading “First use of the pneumatic postal tube in the United States is to send through it a copy of the Holy Scriptures, the greatest message ever given to the world. Covering the Bible is the American flag, the emblem of freedom of 65,000,000 happy people.”

Pneumatic mail delivery thus joined the list of Philadelphia Firsts, however this one comes with a caveat: we were decades behind Europe. In 1853, the first pneumatic dispatch system was developed, linking the London Stock Exchange to the London’s main telegraph station. Twelve years later, the tube-equipped Rohrpost was built in Berlin and lasted until 1976. Paris created a similar system in 1866 that lasted until 1984.

After this successful trial, postal officials and workers continued testing the carriers and tubes with various items, including newspapers, eggs, oranges, jars of jelly, a bunch of flowers, shoes, and a shirt. Even a lit candle was transported between stations. All this was regarded as an exhibition of the wonderful possibilities of the modern age on the cusp of the 20th century.

Wanamaker had been wary of the potential cost of building and operating such a novel delivery system. So he contrived a plan in which the Post Office contracted with private companies to build and maintain pneumatic tubes systems, and then paying an annual rent for their use.

Wanamaker proposed the system in a several reports to Congress, stating that he “should like to see [pneumatic mail systems] in cities like Philadelphia, St. Louis and others of importance… as a necessary step in the march of postal improvement.” He then arranged for a congressional appropriation of $10,000 for experimental purposes in Philadelphia. Work on digging up the city streets began in 1892.

Comprised of Philadelphia capitalists, the Pneumatic Transit Company used the funds to lay two 6.5-inch-diameter pipes between the city’s main Post Office at Ninth and Chestnut Streets and the Chestnut Street Station (a postal branch at 323 Chestnut Street), a distance of just over half a mile. The latter terminal was relocated to the Philadelphia Bourse Building in 1894. 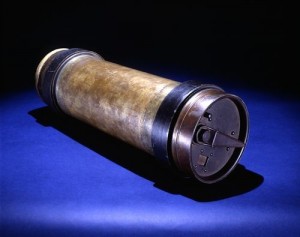 A typical mail canister (or carrier) used by the Philadelphia pneumatic delivery system. Made of steel, it had felt end rings that would create a good air pressure seal while in the pipes. | Courtesy, Smithsonian National Post Office Museum

Two cast iron tubes were necessary, one in each direction. They were bored as smoothly as gun barrels and in some places were buried 22 feet deep—about ten feet below the water table. Joints were sealed with oakum and lead. At street corners, curved sections of pipe were used having a radius of twelve times the diameter of the tube. The agreement between Pneumatic Transit Co. and the Post Office Department was that the Post Office could use the line for one year for free and then could rent, purchase or reject it.

A continuous stream (or pressure) of air—not vacuum—from a steam-powered compressor in the Philadelphia Post Office’s basement generated six pounds per square inch and pushed specially-designed cylindrical mail canisters (also called carriers) at around thirty-five miles per hour. Each 18-inch-long steel canister could hold up to 500 letters and traveled in a spinning motion. As many as eight carriers could be dispatched in a minute. Mail moved between the two stations in about a minute, compared to 15 minutes that the trip usually took by horse and wagon through the congested streets of Philadelphia.

Philadelphia’s pneumatic mail system was extended from the Central Post Office to Broad Street Station in 1898 and then to Reading Terminal. In that era, about 65 percent of all mail that passed in and out of Philadelphia—some 550,000 letters every day—came and went by way of trains that stopped at Broad Street Station. All this mail was handled through the Broad Street Station tube, except for mail arriving and departing the city between 12:30 and 2 am when the tube was shut down to be serviced.

Further expansion throughout Center City followed, including a line all the way to the Reading Railroad’s North Philadelphia Station. The city eventually had 19.9 miles of underground tubes operated by the Pneumatic Transit Company of Philadelphia. The system’s capacity could move 240,000 letters an hour; more than 35,000,000 letters were carried in the first four years. The 6.5-inch tube system was in place until 1898 when they were replaced with 8-inch tubes (except for the original experimental route between the Central Post Office and the Bourse). 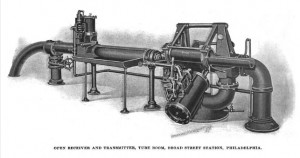 An open mail carrier receiver and transmitter machine at Broad Street Station, some time after 1897 or 1898, when tubes running to Broad Street Station were installed. | From Postal Guide, Philadelphia Post-Office: Containing Postal Information (1900)

At a later demonstration of the enlarged system, invited guests were served with hot refreshments sent through the tube from a point miles away. The system also demonstrated that living animals could be whisked at high speed for miles underground. Cats, puppies, monkeys, rabbits, guinea pigs, roosters, and an aquarium of goldfish experienced the novel trip, not merely once but several times. No animal was harmed by its ride through Philadelphia’s delivery tubes.

The idea of conveying people in this manner was then posited. Of course, the 8-inch tube network was too small and there was fear of suffocation if the carrier became stuck. However, it was felt that such human transport would become possible—and commonplace—after 12-inch tubes were implemented as the next incarnation of the tube system. It was seriously suggested that a small boy could be used for an experiment of this kind when the time came. But the larger pneumatic system was never realized; a Congressional Commission in 1900 recommended that the standard size pipe would remain 8 inches in diameter.

In the 1890s, it was proposed to gridiron Philadelphia with pneumatic tubes so that mail, telegrams and packages could be sent instantly to any part of the municipality in any direction from any point. There was to be a main air pumping station somewhere near the newly-opened City Hall and tubes were to radiate from the building in all directions. Smaller pump stations would be located at branch offices at outlying parts of the city. The scheme was to give Philadelphia the quickest and most comprehensive delivery system in the world. 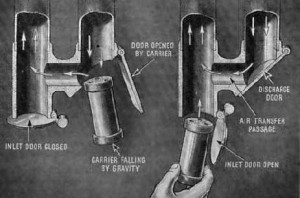 New York City, Boston, Chicago, and St. Louis adopted similar delivery systems by 1898, all operated by the Post Office Department. It was then proposed that pneumatic tubes could be used to deliver mail between cities. Another U.S. Postmaster General predicted that every American household would be linked to every other by means of pneumatic tubes one day. There were even plans to build a pneumatic delivery system between North America and Europe. By 1915, cities in this country had an aggregate of over 56 miles of pneumatic tubes pulsing under their streets and sidewalks.

But pneumatic tube systems gradually lost their appeal when they became too expensive to maintain. Moreover, it was clear that the systems could not keep pace with the movement of ever-changing business centers in municipalities. Beside this, the tubes were never particularly efficient. About 90 percent of the power generated for the air pressure was wasted in pushing the air through the tubes. Furthermore, motorized delivery trucks came into use and were found to be much more efficient for transporting mail in urban centers.

In addition, there were occasional mishaps. In New York, for instance, pieces of first-class mail were mutilated every now and then after spilling out of their canister while in transit and then being ground to pieces by subsequent canisters. However, the greatest disadvantage was that the pneumatic systems could not carry all classes of mail, Parcel Post Service in particular.

The Post Office suspended pneumatic service during World War I to save money for the war effort. Afterwards, Postmaster General Albert Sidney Burleson was against reinstating the tubes and saw to it that funding for them was struck from the 1918 Post Office Appropriation Bill. Additionally, a Congressional committee had determined that the use of the pneumatic tubes cost $17,000 per mile every year, with rental charges for the tubes an “exorbitant, unjustified and an extravagant waste of public funds.” Without the necessary financing, pneumatic mail delivery ceased in Philadelphia and elsewhere on June 30, 1918. 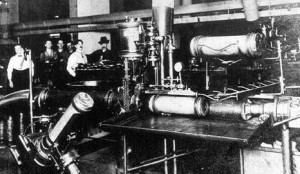 Pneumatic tubes in the basement facilities of a post office; clerks worked around the clock to fill and send, open and empty the tube containers. | Courtesy Smithsonian National Post Office Museum

Limited operation resumed in New York and Boston in the 1920s due to high mail volume, but service was suspended throughout the entire nation on December 12, 1953. All parts of the system were decommissioned on December 31, 1953.

Nevertheless, pressurized air delivery is still seen as fast, reliable and cheap, and the concept still comes up regularly on television and in real life. To this day, banks use small versions of the pneumatic carrier systems with plexiglass canisters for their drive-through windows. Other pneumatic delivery systems are in use or are being installed (even today) in factories, rail yards, hospitals, libraries and other places around the world. For example, a cafe in New Zealand has installed an air tube system to deliver meals to customers. Each stainless steel canister will be filled with three sliders and a small order of fries.

Merchant-king John Wanamaker profoundly affected Philadelphia and its development. And in the case of pneumatic delivery of mail in urban areas, Wanamaker’s innovative genius once again came into play in his home town. He would surely be pleased that the topic of pneumatic mail is still the subject of countless websites over a century later.