Plotting The Future Of Manayunk’s Cathedral 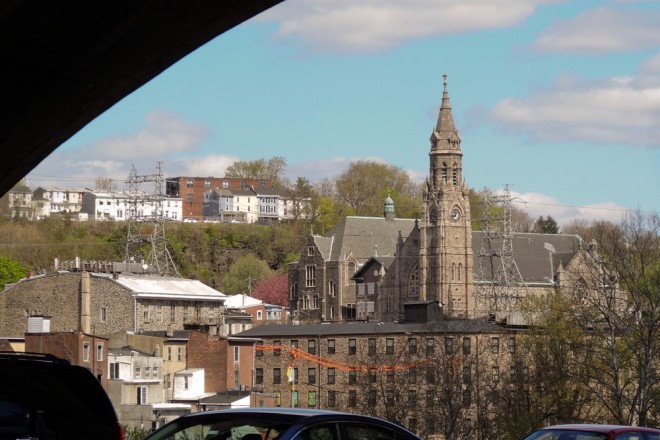 “Manayunk’s Cathedral” towers over its neighborhood, especially when seen from the Schuylkill Expressway | Photo: Bradley Maule

A lifelong parishioner, she and her husband John were married here 57 years ago and brought up five children through the parish school next door. (She’s also an alumna of St. John the Baptist High School for Girls, which remained open until 1964.) 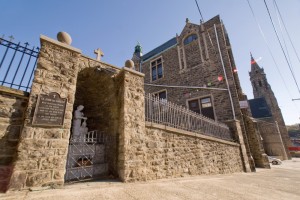 Today they are members of a committee with a strong attachment to their parish and its house of worship, an 1894 church designed by renowned architect Patrick C. Keely and embellished with the works of sculptor Joseph Sibbel.

That simply stated mission is the founding purpose of the Committee to Save St. John the Baptist, a committee whose members hope to formalize as a 501(c)3 nonprofit in order to raise the funds needed to stabilize and restore the church.

“This has been a learning process for all of us,” says Richard Van Fossen, 47, co-chair of the committee. “We know that we’re at a turning point in our history but we are seeing real dialogue with the archdiocese, as we know that it will take a collaborative effort to save the church.”

First, the committee members must learn what fate has in store at a parish meeting at 7 o’clock this evening in the social hall of the church. The subject of the meeting is a report prepared by architects and engineers from Vitetta, a Philadelphia-based multidisciplinary firm, and Exton-based MacIntosh Engineering. The report has circulated among members of the Parish Council since March, but not to the public. A second engineering study carried out by Philadelphia’s O’Donnell & Naccarato Structural Engineers has yet to be released.

Reached by phone, a parish spokesperson declined comment in advance of tonight’s meeting. 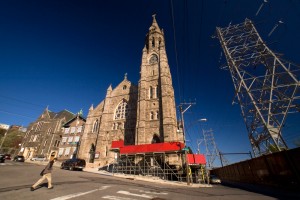 Scaffolding under the bell tower of Manayunk’s Cathedral has been in place since last year’s building collapse at 22nd & Market forced the parish to study its structural integrity | Photo: Bradley Maule

The church remains open for worship and has no outstanding violations with the City’s Department of Licenses and Inspections. However, in a letter to the parish in October, the Rev. Monsignor Daniel Kutys, an archdiocesan official, indicated that an assessment of the church had revealed structural problems. The study was said to be done to comply with city ordinances following the collapse of a four-story building at 22nd and Market Streets which killed six people last year. Scaffolding put in place under the bell tower following the study is costing the parish about $1,300 per month.

In a Fox 29 news report that aired on March 27, parishioners claimed that the Church was not being forthright about the situation. St. John’s pastor, Rev. Thomas P. Kletzel, decried the “false information” broadcast in the report and insisted that he had provided the facts as they had become available.

“I know the road has been a tough one in Manayunk over the past few years and that everyone has had to deal with frustrations,” Kletzel wrote in a statement to the parish. “It’s important for you to understand that we all seek the same outcome—strength and vitality for our Church.”

In private meetings, committee members say that Kletzel and Auxiliary Bishop Daniel E. Thomas, a Manayunk native, have been receptive to their concerns and supportive of the movement to create the 501(c)3. But they maintain that the process of addressing the church’s pressing needs has been too slow.

The Price of Preservation 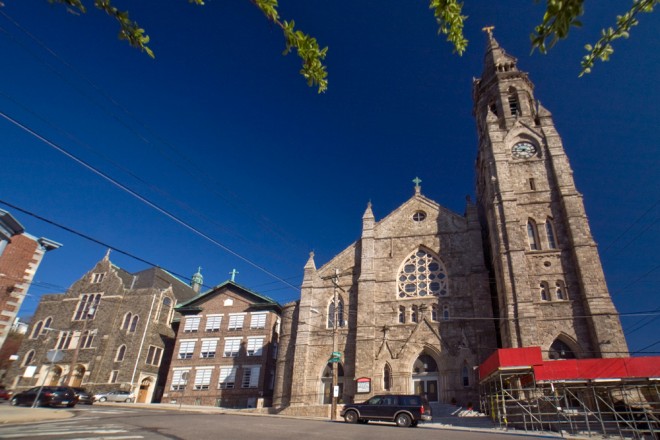 A copy of the Vitetta/MacIntosh report obtained by Hidden City includes cost estimates of $225,000 for “urgent needs” of the church and $1.1 million for full repairs. The most urgent problems are the buttresses and spires on both the Rector and Cresson Street sides, which have rotated and caused cracks in the masonry and the decentering of the spires.

The report recommends dismantling and reconstructing the entire buttresses, as well as repointing the masonry for deficient mortar joints, repointing the interior and exterior of the tower, and making repairs to the roof and interior plaster for water damage.

Vitetta/MacIntosh also estimate $400,000-550,000 for the parish rectory (located fittingly on Rector Street), most of which would go toward repairing or demolishing the severely deteriorated porches. The parish’s school buildings on Rector Street, most recently leased by Green Woods Charter School, and the former convent on Cresson Street are not included in the report.

John Boyce, a semi-retired lawyer who served two decades on the parish finance committee, is leading the way to establish the nonprofit. The committee also has the interest of Tony Canuso, a retired civil engineer and founder of Neshaminy Construction.

With a background in highway and bridge construction, Canuso, 80, has turned to church restoration in his retirement. He offered his contracting management services pro bono to his parish, St. Bede the Venerable in Holland, PA, for the transformation of its 50-year-old church building into a classical interior.

“We try to help out these churches where we can without costing them an arm and a leg,” he says. Costs for design fees, management, overhead, and profit can each add 10% or more to repair estimates.

Co-chair Van Fossen, who directs fundraising for Temple’s Fox School of Business, estimates there are 10,000 living alumni of St. John’s elementary and secondary schools. He envisions a five-year campaign to raise funds that will go into immediate preservation needs as well as operating costs thereafter.

Forming to Preserve History and Heritage 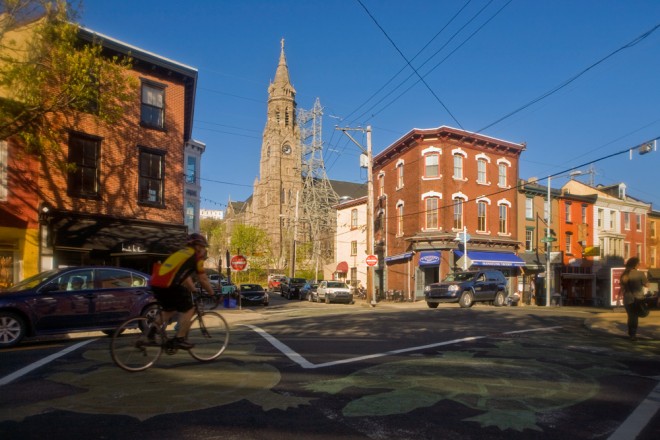 Van Fossen says that his committee is making both a civic and a religious heritage argument for the church’s significance, as a beacon to Catholic immigrants and embedded in Manayunk’s mill-town history.

Founded in 1831, St. John the Baptist is the tenth-oldest parish in the archdiocese. The present church was built through a gift from an Irishman named Bernard McCane, who made a trip to the neighborhood to visit a priest friend.

“He fell in love with Manayunk,” says Van Fossen. “It reminded him of Ireland and of course there was a large immigrant Irish population.” McCane and his wife, Cecilia, gifted $100,000 to the parish (over $2 million today) to build the new church, which ultimately cost $250,000.

The architect hired for St. John’s was another Irishman, Patrick C. Keely, who designed over 600 churches in North America. St. John’s remains Keely’s second surviving Philadelphia church—his first is the endangered, circa-1847 Assumption of Blessed Virgin Mary at 12th and Spring Garden Streets—and his only active house of worship. 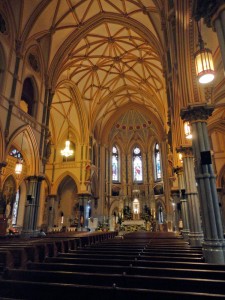 New York sculptor Joseph Sibbel complemented Keely’s Gothic design with an array of sculpted saints. Statues of John the Baptist, St. Patrick, and Saints Peter and Paul overlook the interior atop columns. Flanking the altar are Saints Bernard and Cecilia, the patrons of the McCanes. Sibbel also executed the bas-relief stations of the cross placed along the church’s walls between the stained-glass windows designed by John Morgan & Sons.

As Manayunk’s and Roxborough’s Catholic immigrants diversified, St. John’s served as the source from which the later parishes radiated, as Polish (St. Josaphat), German (St. Mary of the Assumption), and Italian congregants (St. Lucy) received their own churches.

Parish rivalries, of course, came to a head in 2012 when the archdiocese closed St. Josaphat’s and St. Mary’s, and many of their lifelong parishioners have been reluctant to adopt St. John’s as their parish. Kletzel, St. John’s pastor, seems mindful of lingering resentments, as he indicated in his statement.

“Whether or not we can succeed is an unknown, but I do know that when many committed people work together, we stand a much better chance of accomplishing the goal. If we splinter and fight with each other in public or in private, we diminish those chances greatly,” Kletzel wrote.