Incident On Wissahickon White Trail, Or, An Open Letter To Dog People 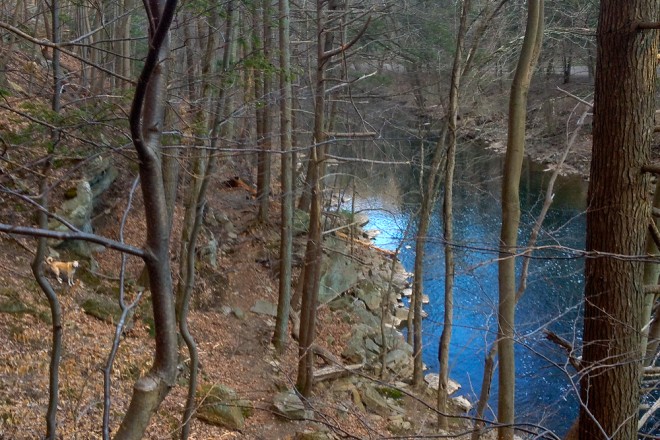 The beautiful Wissahickon gorge, with a dog off the leash and off the trail | Cell phone photo: Bradley Maule

DISCLOSURE: As anyone who’s seen my Instagram feed or seen the web site I’ve operated since 2002 can tell you, I am a Cat Person. I’m also a Leo (the lion, a cat), and I am an only child. I can’t help these things. But just because I am a Cat Person, that doesn’t mean I am anti-dog. I like some dogs a lot, like my friend Mark’s French bulldog Hugo, who’s my buddy, and my friend Liz’s three-legged chihuahua Bertie, who’s just the sweetest thing.

But some dogs. Some dogs are the worst, and it’s not even their fault—it’s their owners’ fault, for not having the care to train them better or even feign concern for other people. Anyone who spends a regular amount of time in Philadelphia’s magical Wissahickon Valley Park encounters this type of dog owner all the time.

I completely understand the instinct to let your dog off the leash to run wild, exercising its animal-ness, to sniff, play, even swim in the creek. City dogs live in small spaces and they need to get out too. The Wissahickon is just as magical a place for them. But there are rules for a reason.

In the latter half of yesterday’s picture perfect spring afternoon, I hiked from the trailhead at Emlen Street and Allens Lane up to that at Chestnut Hill Avenue, above the covered bridge. This four-mile-or-so hike was the Week 14 installation of my yearlong project in which I collect, sort, inventory, and store all the litter I come across. (At the end of the year, I will present my findings at a venue to be determined.)

Doing such a project means that sometimes you have to go off-trail. People throw their garbage—Gatorade bottles, Bud Light cans, yogurt containers, pregnancy tests—into the woods. It’s gross. But I’d rather bend a rule and go off-trail to fetch an unnatural bottle glimmering in the sun than leave it to ruin someone else’s view too. Going off-trail leaves you susceptible to poison ivy, something that took me three whole months to catch. Retrieving pieces of trash under brush and in the creek is much easier when you carry a trash grabber. The one I have, on loan from Philadelphia Parks and Recreation, is an Arcoa brand Pro Pick-up Tool, an aluminum shaft with a pistol grip and rubber “grabber” cups at the end. My cat seriously dislikes the thing, so it makes sense that the two dogs a woman from Chestnut Hill was walking off-leash disliked it too.

Newsflash: the law states that dogs within Wissahickon Valley Park must be on a leash no greater than six feet. This just in: most people disregard this law. This can be troublesome, not just for people hiking by themselves deep in the woods, but for law-abiding dog owners who clearly get it. So few people leash their dogs—I’m keeping a tally as part of my project, of dogs on-leash and off-leash, as well as a tally of piles of dog shit and bags of dog shit that someone went to the trouble to pick up only to then throw the bag into the woods—that I almost want to thank those who do. In fact, at Friends of the Wissahickon’s Trail Ambassador program, this very scenario is the one posed by veteran ambassador Shelly Brick during training, a situation to which trainees are asked to hypothetically react. She told the class that she actually does thank the people walking their dogs on a leash.

Last evening on the White Trail, between Valley Green and Rex Avenue, the Chestnut Hill woman let her two medium-size dogs run free, off the leash. It was one of those instances in the woods where you’re going the same direction as someone else on a trail. I keep a pretty fast pace, so I generally say hello and then get up ahead pretty quickly.

The first time I got up ahead, I spotted a bottle a few feet off-trail and had to scramble up to get it. The dogs were so ahead of this woman that I couldn’t see her, and one of them approached me to see what I was doing. I said something banal like “hi doggy” and continued on. The second time, I stopped to have a drink of water and look at my map. The dogs ran up again and disturbed my peace (which, you know, is what you seek when you enter the woods alone). And then, the third time. 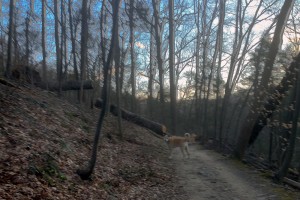 Approaching Rex Avenue, which leads from Germantown Avenue in Chestnut Hill down to Forbidden Drive across a bridge, I noticed four cans about 10′ off the trail down a bank. By this point, I carried in my hands two plastic grocery bags full of litter I’d collected since Mt Airy and had a third in my backpack. I shimmied down to the cans and got my bag ready, when the two dogs ran up the trail and then followed me down the bank. Then they started growling.

As the dogs started lunging toward me, I shouted, “lady you better do something about this!” And she replied, “what do you want me to do, they’re down there!” As I continued to fend off the animals with my trash grabber, she finally came to her senses and did come get them, pulling both by their collars back up to the trail.

Before she started walking away, both dogs still off-leash, she had the nerve to tell me how I should react if this ever happens again: “just say hi and say their name.” Adrenaline rushing, I snapped back, “this is exactly why there is a leash law,” and she muttered something under her breath and walked off toward Chestnut Hill.

Last month, Ronnie Polaneczky wrote a fascinating story for the Daily News about a recurring altercation between two dog owners in Pennypack Park which resulted in one owner killing the other’s dog, which repeatedly ran off-leash and which the alleged dog killer warned the other about. To paraphrase Chris Rock, I’m not saying he should have killed that dog, but I understand.

Dogs can be awesome, but dogs can also be frightening, especially if they’re running free through the woods on their animal instincts.

To the good Dog People, I plea to you: you’re good people and your dogs reflect that—can you please convince the bad Dog People to have the same respect of others? As with anything—cyclists, drivers on 76, apples—one bad one spoils the bunch. “Oh he’s just really friendly” or “oh she must like you” is absolutely no excuse. Nor is “they don’t like your stick” or “they’ve never done this before.”

I want to like your dog. Keeping it on a leash, as is the law, or at very least keeping it near you when there are other people around, goes a long way toward accomplishing that.