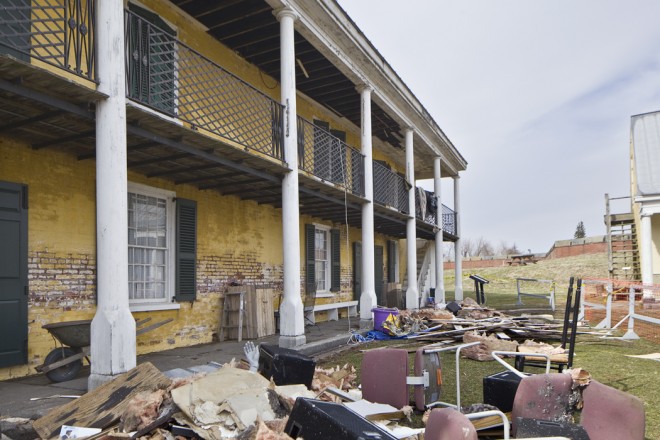 Editor’s Note: Beth Beatty could use a little luck. Since she took over as executive director of Fort Mifflin on the Delaware in 2010, the historic site has been beset by hurricanes, floods, electrical outages, a collapsed sea wall and now a fire on March 23rd that damaged the Officers’ Quarters building. The fire was extinguished before it spread beyond the attic area where the blaze began, but firefighters punched two large holes in the roof and soaked the walls and floors in the process of putting it out. The historic fort, which played a pivotal role in the Revolutionary War, is owned by the City of Philadelphia and leased to Fort Mifflin on the Delaware, a 501c3 nonprofit organization. We spoke with Beatty on Wednesday about the situation.

Peter Woodall: So how bad was it?

Beth Beatty: Well, it could have been much worse. A group of Scouts was staying overnight at the Fort along with a longtime caretaker from Fort Mifflin, and several adult chaperones, one of whom was a firefighter. He discharged all of the fire extinguishers, which kept the fire from spreading too much before the Fire Department arrived. The City came out the Tuesday after the fire and and put plywood boards over the holes in the roof and also boarded up the windows on the west side of the building, which were open to the weather. The structure itself seems to be stable

PW: It sounds like smoke and water damage were worse than the fire itself.

BB:  We lost some flags, and many uniforms, period attire and costumes, plus a good bit of our business records. The clothing was reproductions accumulated over the years that were used by tour guides and volunteers. They are very expensive to replace–things like Revolutionary War regimental coats, and an almost complete set of World War II uniforms. It’s a substantial loss. We will replace what we need with the insurance coverage. Anything that was original–demonstrating weapons, artifacts from Casement 11, and some uniform items, was in the vault. 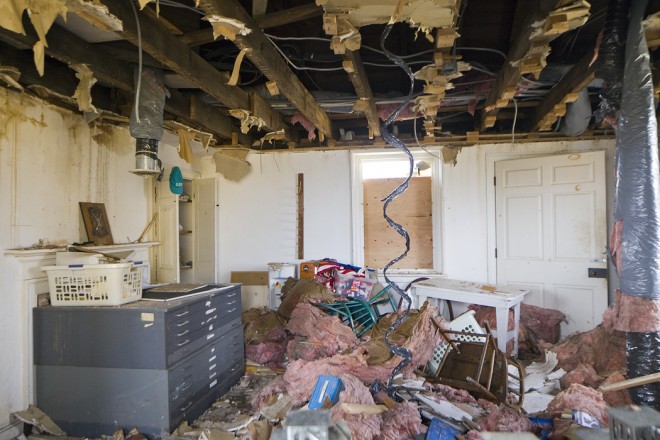 The architectural drawings by John Milner & Associates were stored in the gray cabinet at left. The metal vault where original uniforms and artifacts were stored is in the far right corner of the room | Photo: Peter Woodall

BB:The document files with our architects drawings, that has all been recovered with very limited damage including drawings from the restoration that was done in the 1980s by John Milner & Associates. Having those is a good first step for when we begin to repair the building–we don’t need to reinvent the wheel.

PW: How did your cleanup day last Sunday go? The weather was miserable that day.

BB: We had 45 people here. Considering the weather it was an amazing turnout. As Wayne said, the fire didn’t get us but the pneumonia might. We got most of it done–there are some remaining debris. We worked until the dumpster was full. SERVPRO will swap out dumpsters on Monday and their team will finish the job. It’s been a horrible challenge to face but we’ve been able to assemble community partners to help make it less painful. On Sunday, there were historical reenactors from multiple time-periods, the paranormal folks, guys from the USS Olympia. It was really a broad community endeavor.

PW: Do you know how much it will cost to restore the building?

BB:  Not yet. It now takes a place among the list of capital projects here at the Fort. The priority, even in light of the fire, will remain the roof of the Hospital Building, where our offices are, which is seriously compromised and needs to be repaired to prevent it from becoming much worse. The damage is already done in the officers’ quarters.

PW: Do you have money to repair the Hospital Building?

BB: We don’t have any money for that in our budget. It’s very expensive because of the historic permitting that’s required. It has to be a cedar shake roof, and there are structural needs underneath, so it’s more than just needing new roof shingles. 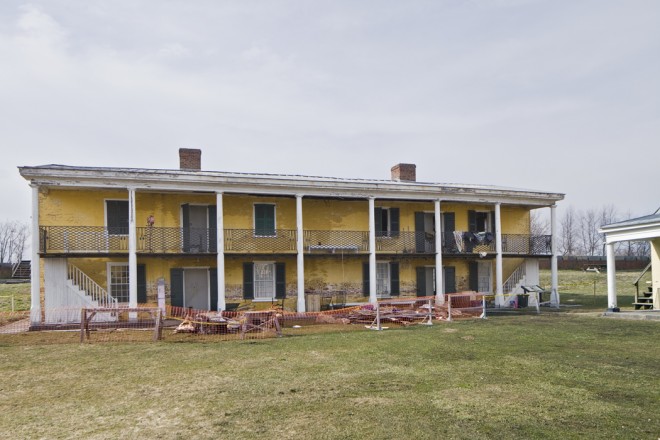 PW: What about insurance?

BB:  We were carrying liability insurance, however while the contents of the buildings are insured, unfortunately the structure itself was not. It’s very different to insure a three room house museum vs. a multi-building site. We check the account balance before we go buy paper clips.

PW: Given these pressing needs, are you thinking about launching a capital campaign?

BB: Our budget primarily comes from earned revenue–donated income lags behind our goals. The Board of Directors will meet in a couple weeks and launching a capital campaign will be one of the agenda items we will discuss. The Board is also in the middle of the strategic planning process. Luckily, this happened before we hit the capital projects portion of the planning process.

BB: We don’t get money directly from the City but we do receive support from the Philadelphia Cultural Fund through their competitive grant process. It’s been around $6,500, which is especially valuable because it can be used for operations. We will work with the City to repair the fire damage, and they’ve been very cooperative with their initial response. SERVPRO is donating services valued at $10,000 to dry the building out. Since we’ve received this donation, we’re hoping the city will be able to help us out in another area. 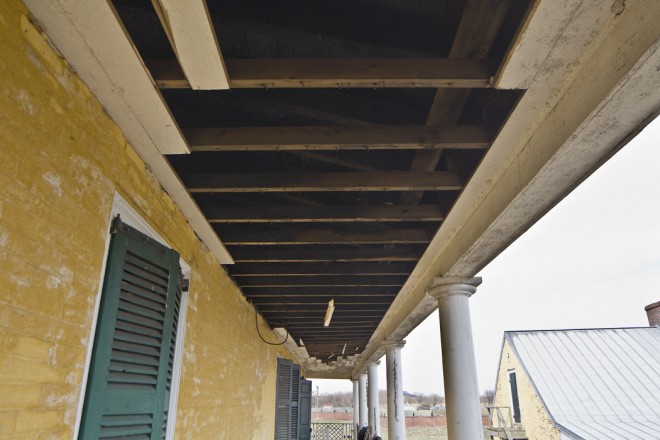 The fire charred the attic’s wood beams, which will need to be replaced | Photo: Peter Woodall

PW: Would it be possible to use skilled volunteer labor to do the work? I know Philadelphia has some amazing carpenters. Perhaps you could recruit a few of them to help out.

BB: I think once the plans are drawn up, I’d really like to explore the idea of an old fashioned roof raising as long as we could function safely within the parameters of the historic restoration.

PW: In the meantime, are you accepting donations?