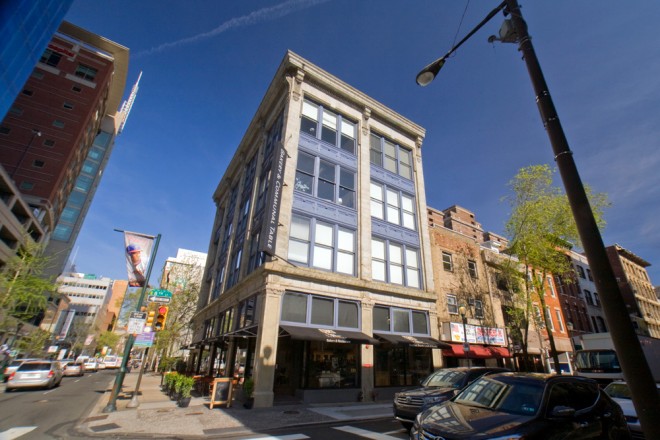 Though its prominent corner location has long been associated with Jewelers Row—thanks largely to longtime tenant and gregarious spokesman Jerry Robbins—it seems appropriate enough that the four-story building at 801 Walnut has returned to its coffee roots. And just in time for its 100th birthday!

Though the building was officially completed in 1914, its origins date back to 1870, when one Alex Sheppard purchased the James R. Webb Coffee Company and opened a coffee production and sales storefront at 718 Walnut Street, on the southeast corner of Eighth and Walnut. After over four decades of success, Sheppard purchased two old rowhouses-turned-commercial-properties at 140 and 142 South Eighth Street with the intentions of building a brand new, $25,000 coffee and tea factory that would not only manufacture their goods, but distribute them across the country. Precisely catercorner to their established operations, the new 9,700 sq ft showroom ushered in a new era for the 19th Century baristas. 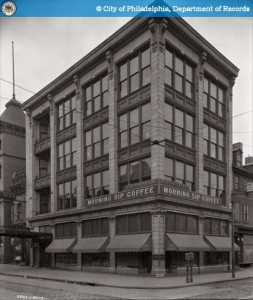 With a portfolio full of Horn & Hardart locations and dairy processing facilities, short-lived local firm Stuckert & Sloan were brought on by the rebranded Alexander Sheppard & Sons Company for the design. Construction began in the Fall of 1913 and wrapped up the following year. While the original location functioned more like a coffee-roaster-café, the new space functioned as a grocery store while also serving coffee and tea freshly roasted and blended on the fourth floor above.

Less than a year after opening, Alexander Sheppard & Sons’ coffee found distribution in grocery stores and restaurants across the United States. Sheppard himself lived to see this happen before his death in 1916, when the company passed on to his four sons. Later that year, the sons filed numerous patents of new coffee blends they concocted upstairs. Of these, one called Morning Sip proved to be the most successful by far. By the end of 1917, Morning Sip was so popular that the Sheppard brothers emblazoned its name over their Eighth & Walnut storefront and were forced to open another Grocery/Roaster/Distributorship in Chicago to keep up with demand from the West. 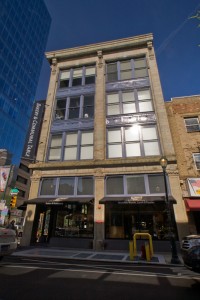 If it already says “breakfast” and “lunch,” does it really need “brunch” on the awning? | Photo: Bradley Maule

By the end of the 1920s, Alexander Sheppard & Sons had outgrown 801 Walnut and moved to 18 South Front Street. By the mid-20th Century, Horn & Hardart’s automat empire proved unbeatable and the Sheppards sold out to the famous larger company.

After Sheppard & Sons vacated their longtime home, it was shared by a clothing company and a print shop until 1936, when the building’s proximity to Jewelers Row finally made practical sense. Numerous jewelry concerns would make 801 Walnut home for the following six decades: the Quaker City Jewelry Company, Bryard F. Brogan, the J. Aion Company, the Oxford Jewelry Company, Esty’s Jewelers, and Heathrow Ltd., just to name a few.

Of course, while those companies have fallen into obscurity, Leo Robbins Jewelers (now Robbins’ Diamonds), the final gem peddler to inhabit the building, made a name not only for themselves, but their “Robbins Rocks” radio and television commercials made Eighth and Walnut (and therefore the building) one of the most well-known corners in the city. Robbins moved into 801 Walnut’s storefront in 1952 and eventually took over the whole building. In late 2010, the company fell victim to the lousy economy and they closed all their locations except the one in Newark, Delaware.

Pearl Apartments purchased the old Alexander Sheppard & Sons Building immediately afterward for $1.325 Million and converted the upper levels to apartments. The ground floor storefront now hosts Le Pain Quotidien, a Belgium-based bread and coffee shop—returning the space to its origins of 100 years ago.