An Evening Home For Wayward Sons 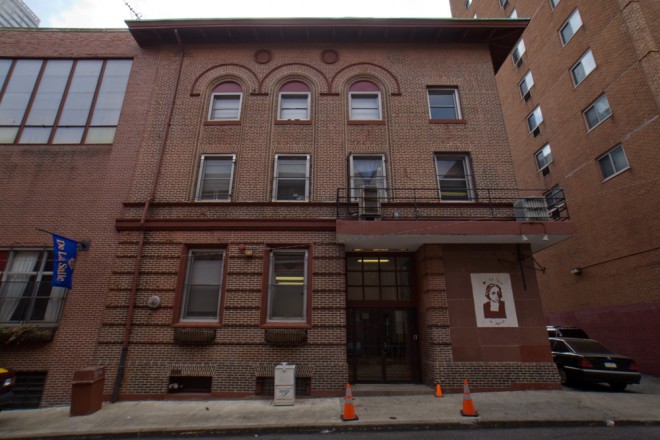 Tucked away on tiny South Van Pelt Street in Center City, this beautiful little 120-year-old building has existed to help generations of Philadelphia boys. While occasionally changing to keep up with the times, the old Evening Home for Boys survives today as De La Salle in Towne, doing the same type of hard work it was designed for all those decades ago.

In 1884, one James A. McDevett, disturbed by the presence of unsupervised, homeless, and uneducated teenaged boys and young men throughout the city, formed the Evening Home for Boys as a safe place where they could eat a hot meal, gain new knowledge through study, or have some good clean fun. In addition to the ones that were homeless, McDevett was concerned about the many young men and boys in the city that would quit school at age 14 and go into employment into the same field as their fathers. He thought that the only way to get these young people to develop aspiration was to provide them with mature guidance and a real alternative to the temptations they faced at the end of their workday.

The initial iteration of the Evening Home was extremely successful in its goal of providing upward mobility for wayward boys through its Night School and became one of the favored charities of Philadelphia High Society. It raised massive amounts of funding in only a few years; so much so that they could move out of their rented space (which quickly proved inadequate) and build a standalone facility for the Evening Home. On top of that, the Free Library of Philadelphia became interested in opening a branch at the home, creating the need for more space.

By the end of the Summer of 1894, land on a 26-foot-wide alley then called Albion Street was purchased and a three-story design by local architect Westray Ladd was complete. The cornerstone was laid on November 8th of that year. 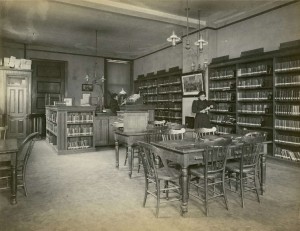 The newly-formed Evening Home and Library Association opened in early 1895. It came equipped with a large assembly room, reading room, coffee room, and several classrooms where cooking, drawing, physiology, music, piano, and natural history were taught in addition to the club’s renowned Night School. Many of the instructors for these classes were actually alumni, some of the club’s first members paying the favor forward. On October 30th, 1895, the Evening Home Branch of the Free Library of Philadelphia opened in the club, providing 2400 books.

In the daytime, the clubhouse rented space out to private schools, most notably to a school for children with developmental disabilities in 1899 with help from the Civic Club of Philadelphia. It only existed for one year until absorbed by the School District of Philadelphia.

Over the next 19 years, the Evening Home and Library Association became one of the most respected clubs of its kind in the United States. It expanded its vocational programs to include several sports teams and recreational clubs. It spawned branches in several other cities, most of which were formed by former club members. James McDevett himself became well known in the field of helping poor boys and young men achieve and was seen as an innovator. He was invited to write papers and speak on the subject numerous times and once even wrote about the benefits of the newly invented basketball stop-clock and how much it assisted in resolving disputes between boys at his club.

After McDevett’s death in early 1918, the Philadelphia club dissolved in a matter of months. McDevett’s ability to guide young men and boys was so personal and specific to his skill set that the club proved incapable of continuing without him. Only three weeks after its end, what was left of the club rented out the building to the Rotary Club of Philadelphia, making it the Rotary Club’s first ever clubhouse in the United States. After a swift renovation and alteration, they named it Rotary Army and Navy Club. 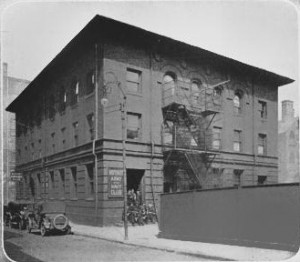 As the Rotary Army and Navy Club, 1918 | Source: The Rotarian, Volume XIII

For the duration of World War I, the Rotary Army and Navy Club offered services for soldiers and sailors working in the city, with room for 234 every night. They offered a lounge, cafeteria, billiard room, and showers for the men staying there. Dances, plays, boxing matches, and vaudeville acts were put on every Saturday night. Three nights per week, officer training classes were taught in order to advance enlisted men through the ranks. By the end of the war, 60,000 servicemen had been through the building. Eight hundred attended classes that led toward a military career.

In 1922, the building was sold to the Big Brothers Association of Philadelphia (the local precursor to Big Brothers Big Sisters), another organization focused on the care of wayward city boys. At the time, the local branch of the organization had only existed for seven years. They commissioned architect David Bassett to design the alterations for their purposes including a small one-story addition to the northeast corner of the structure that would add a swimming pool to the clubhouse. 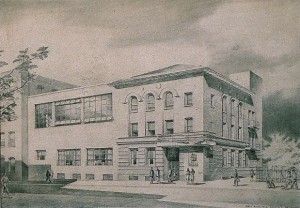 In 1938, the organization commissioned the firm of Magaziner and Eberhard to design a modern addition to the then 45-year-old building. The David Bassett-designed swimming pool was preserved, with the new addition built around and on top of it. The new wing, opened in early 1940, included a large gymnasium, lecture rooms, basement workshops, and a caged-in roof court (long since removed).

In 1972, the Archdiocese of Philadelphia purchased the complex with the intention of making it a day treatment center called De La Salle In Towne. It became the first of several operated by the Saint Gabriel’s System, a Catholic Church-based organization that aims, like the building’s previous occupants, to provide guidance to disenfranchised boys with a focus on those adjudicated as “delinquent.” De La Salle In Towne has been operating out of 25 South Van Pelt Street ever since. It provides a year-round academic program along with training toward Servsafe Certification and Microsoft Office Specialist Certification.

In 1995, the old Evening Home and Library Association was added to the Philadelphia Register of Historic Places as a contributor to the Rittenhouse-Fitler Historic District, finally receiving the recognition it has always deserved.