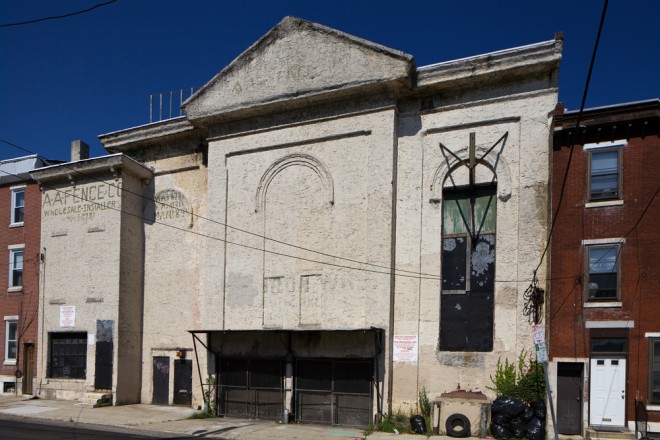 For decades, the AA Fence Company building on New Market Street in Northern Liberties was something of an architectural mystery. The two-story structure stood mid-block on a dead-end street that bordered Interstate 95, its facade almost entirely covered by a thick mask of stucco. It looked like it was once church, most likely, or perhaps a theater or fraternal lodge.

Harry Kyriakodis was able to clear things up quite a bit when he wrote about the building in the Hidden City Daily last summer, after plans for demolition were first made public. It was built as the Second Baptist Church in 1803, became a synagogue in 1871 and remained a Jewish temple until well into the 20th century. Here’s the building in 1959: 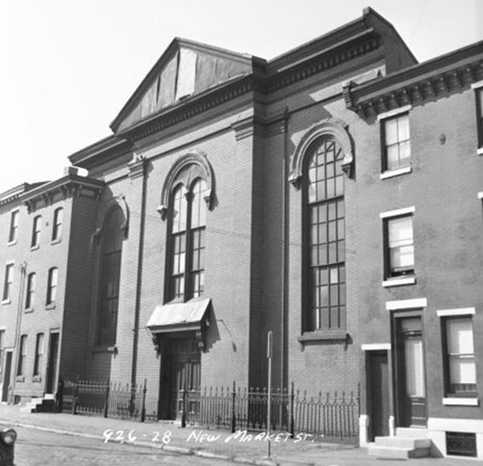 The AA Fence Co. purchased the building in the early 1960s, and adaptively reused the heck out of it, cutting three garage doors into the facade, and slathering on the aforementioned layer of stucco. Now, like many of the neighborhood’s oddball structures, it will be replaced by condos.

It’s not exactly an even trade, but the demolition of Second Baptist has at least provided a tantalizing glimpse into the building’s history. Underneath the stucco was a large tablet made of sandstone with the name of the building–“Hope Meeting House of the Second Baptist Church”–and the dates when it was built and remodeled. 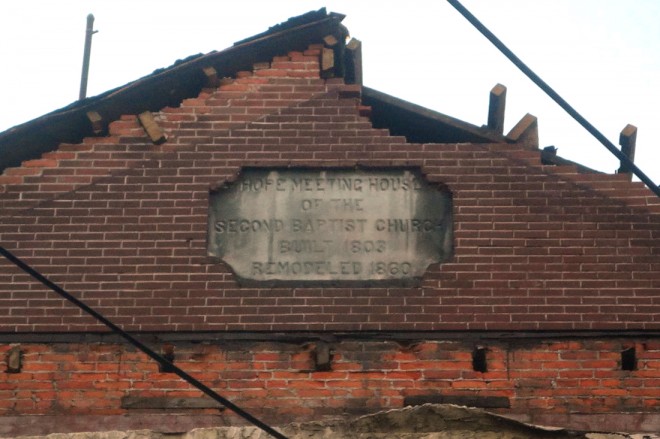 The tablet seemed like an obvious thing to save–there are two architectural salvage companies within five blocks–but that didn’t happen. The foreman on the job site said that taking down such a heavy piece of stone intact would be too expensive, so the workers let it fall and it broke on impact.

The contractors took down the rest of the facade over the following weeks, revealing the intricate truss-work supporting the roof, and the fluted cast iron pillars in the basement. The windows on both the north and south walls were a reminder that the structure was still free-standing with an adjacent cemetery when it was remodeled in 1860. 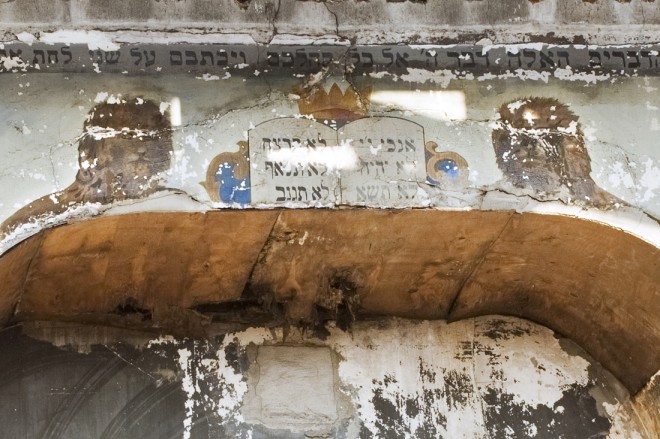 Barely visible in the back of the building were traces from when it was used as a synagogue. Above what had once been the altar were a pair of lions–the Lions of Judah in Jewish iconography–flanking a tablet with what is probably the Ten Commandments written in Hebrew characters. There was nothing to indicate when the wall had been painted. Perhaps it was commissioned after Congregation Anshe Emeth purchased the building from the Baptists in 1871, or when Congregation D’rshe Tov moved in 20 years later. This type of wall painting was once common in both Europe and the United States, but apparently very few remain. A similar but far more elaborate painting that also depicts the Lions of Judah, known as the Lost Shul Mural, is being restored in Burlington, Vermont as an example of Jewish folk art. 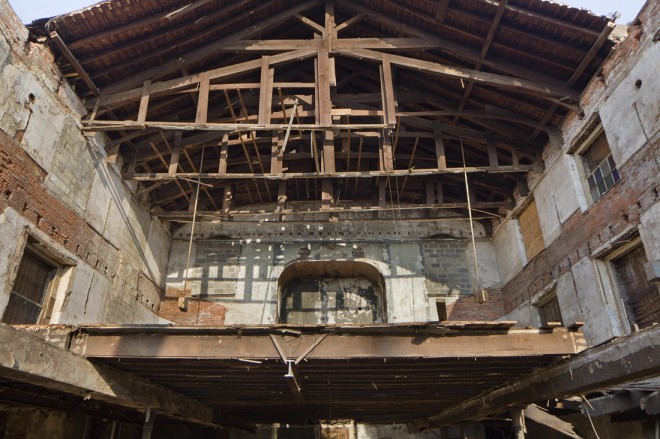 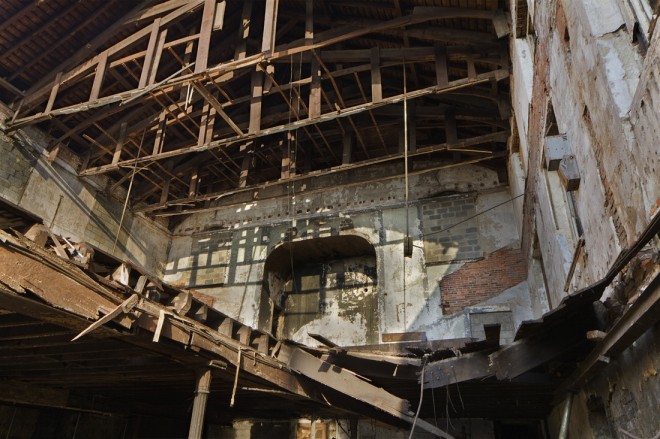 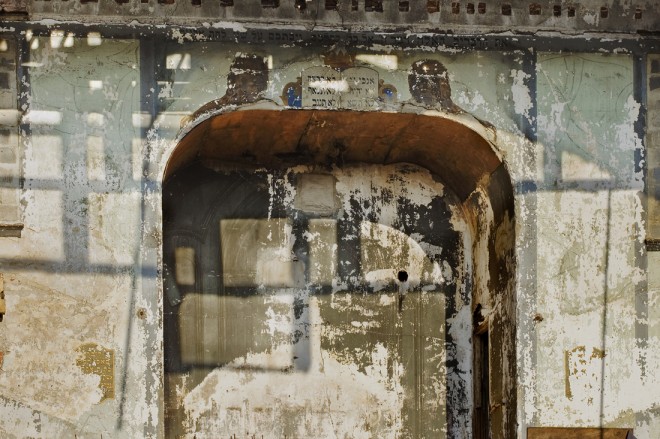 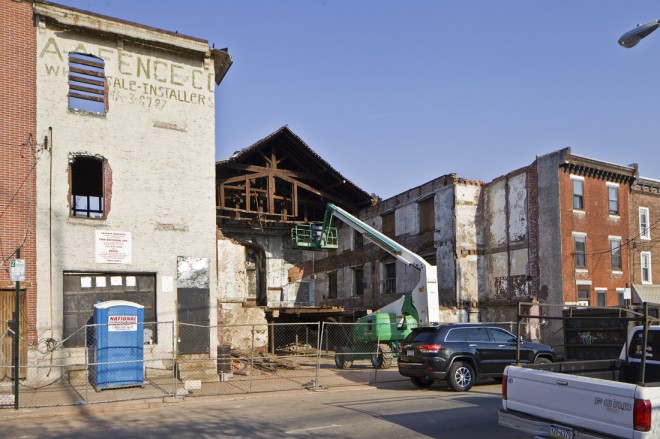 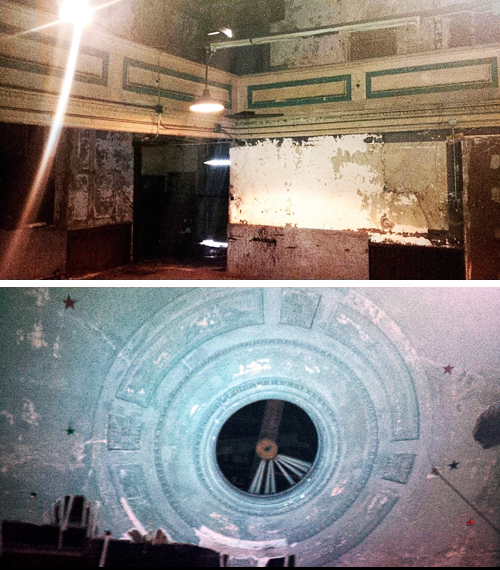