The Newest Part Of The Oldest Theater 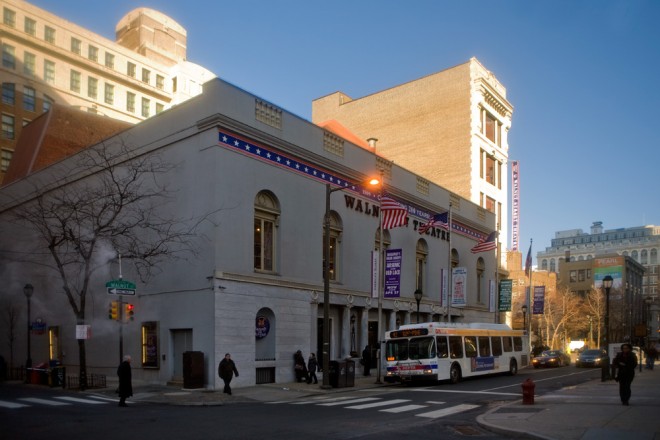 That tall drink o’ water in the sun on the right over there | Photo: Bradley Maule

Anyone who patronizes the Walnut Street Theatre may notice that the entrance is not in the theatre’s front door but in an alcove along the eastern side of the building. That alcove, located at 825 Walnut Street, is the first floor of a 98-year-old building that has only been a part of the theater since 1971. For years I’ve wondered about this building, with its thin and intricately detailed façade, but I struggled to determine its origin or architect. 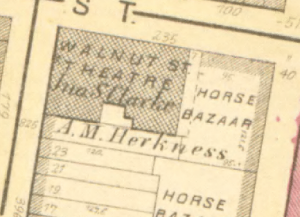 As I’ve become better at recognizing the styles of individual architects over the years, I noticed that the façade of this mysterious building has design elements in common with buildings by architect Frederick Webber, who also designed 1830 Rittenhouse Square, the Vida Apartment Building at 15th and Locust, and the Sheridan Building at 125 South 9th Street, which shares a party wall with 825 Walnut. According to city property records, both the Sheridan Building and 825 Walnut were built in the same year: 1916.

In fact, these two buildings stand on what used to be one property. For 75 years, this land was the location of Herkness Bazaar, an 1840-built Cyclorama building that became an auction house for horses and carriages. A 25′ x 143′ patch of land that was part of the Herkness Bazaar property stretched all the way back to Walnut Street, directly adjacent to the Walnut Street Theater. By the end of the 19th Century, a short retail storefront/office stood here, briefly home to the W.B. Saunders Company before they moved to their iconic building on Washington Square.

In 1915, the same year Herkness Bazaar was demolished, two calls for bids for two completely different buildings appear for the corner of Ninth and Sansom. One calls for a $500,000, 10-story building, just like the Sheridan Building, and the other calls for a 6-story “loft building”, just like the 825 Walnut. The only other things in common these bids had were their architect and owner: Frederick Webber and S.P. Wetherill, respectively. 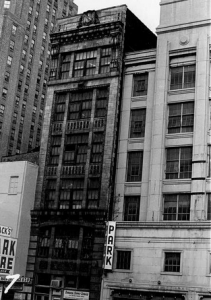 Samuel P. Wetherill and Frederick Webber had an established working relationship. After 1910, Wetherill was in post-retirement life, having recently bowed out from the paint and chemical company that bore his name. He spent his twilight years in the speculative real estate game, running an office out of the Robert Morris Building right next to Webber, who himself was recently divorced from his partnership in an architecture firm. A perfect storm of architectural brains and entrepreneurial braun, Webber designed nearly all of the real estate that Wetherill built between 1911-1922.

Therefore, it is my contention that this building was designed by Frederick Webber, commissioned by S.P. Wetherill, who bought the former Herkness property that consisted of both 125-137 South 9th Street and 825 Walnut Street and developed it as two separate properties.

The first major office tenant of the 825 Walnut building after it was completed in 1916 was the newly-formed Keystone Equipment Company. This company produced machinery and lubricating devices. In later years, they became famous for their innovative home repair tools like the Colton Tool Holder. They shared the building with Thomas V. Hopper & Sons, makers of plate printers and dye stampers, who also had offices in the Sheridan Building.

By 1920, the Raymond & McNutt (later Raymond-McNutt) Company, who made greeting cards, moved into the building. They started out small, sharing the building with two clothing companies. Over the next couple of years they grew to consume the entire place. They named the building the Raymon & McNutt Building (the only name the building ever had besides its address) and continued to grow until moving out for more space in 1925. Their space was taken over by the Liberty Printing Company, who shared the building with the Apfelbaum & Elias clothing company and the McClenaghen Optical Company. Liberty Printing moved out in the late 30s and later merged with Pearl-Pressman to become Pearl-Pressman-Liberty in 1953, a company that still exists today. 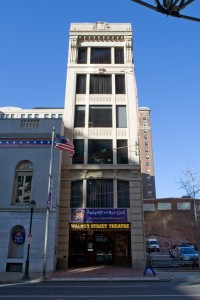 On February 2, 1970, the Walnut Street Theatre Corporation purchased the old Raymond-McNutt Building. They restored the façade and incorporated the building into the historic theater, making the first floor its new box office. They converted the upper floors into business offices, studios, and rehearsal space. The completely restored building opened along with the newly restored theater on October 16th, 1971 and has been associated ever since, even giving over its address, 825 Walnut, as the new address of the Walnut Street Theatre.

The mini-tower holds two small theaters, the Walnut’s education and business offices, two large rehearsal halls, the costume shop, and other spaces used for classroom and camp activities. Despite all of that, the extra space provided by 825 Walnut isn’t enough. The Walnut also maintains an off-site warehouse.

Currently, the old Raymond-McNutt Building is an essential part of the oldest continuously operating theater in America, more like a 90-foot-tall wing than a building separate from the 1809 original (an all-star building featuring William Strickland’s stage and John Haviland’s façade).