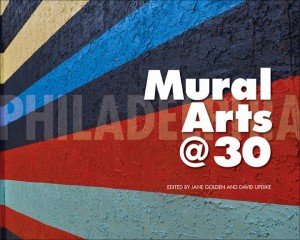 Unless you’ve been doing field research in Antarctica, you’ve probably heard that Inga Saffron is no fan of the Mural Arts Program. In last Friday’s column, she minced not her words regarding the The Philadelphia Rowing Mural, the two-part mural soon to adorn the support walls of the Girard Avenue Bridge over the Schuylkill River, nor the process by which it came to be. Inga’s disdain of Mural Arts is well documented, perhaps none better than the summary then-editor Liz Spikol offered when Curbed Philly still existed, “Will Jane Golden and Inga Saffron Simply Throw Down One Day?”

While promoters have tried in vain to align schedules and venues for the hyperbolic heavyweight showdown, Mural Arts has been busy celebrating their thirtieth anniversary—with an endless series of events, symposiums, and planned projects, plus a PAFA show and a “lavish coffee table book” which takes the stage at the Free Library this evening. David Updike and MAP Executive Director Jane Golden, who co-edited Philadelphia Mural Arts @ 30, out now from Temple Press, will read from and sign the book at 7:30. (For more info, see the library’s web site HERE.)

The essays that make up the book, like the roughly 3,800 murals the program has bedecked upon the city, come from many hands. And like the murals themselves, some of the essays are better than others. Some, like Updike’s introduction, read as art theory by art theorists; others, like Cynthia Weiss’ “Murals and Learning,” flesh out the collaborative, aesthetic process by using examples of specific mural projects. Throughout the book’s 208 pages are vibrant, full color illustrations, including dozens of excellent photos by Steve Weinik.

Golden’s own six-page essay traces the program’s evolution, “[a shift] from an ‘anti-graffiti’ effort to the ‘pro-art’ Mural Arts Program.” She cites specific turning points, including the 1990 Dr. J mural on Ridge Avenue and its use of ‘parachute cloth’ by Kent Twitchell, an LA-based muralist under whom Golden studied, and Mayor Ed Rendell’s placement of the program under the Department of Recreation, headed by Commissioner Michael DiBerardinis—who Inga’s column reminds readers is married to Mural Arts’ current Chief Operating Officer.

Most interestingly, however, the book covering Mural Arts’ 30 years does so primarily by discussing the work of the past five years. Large scale projects provide colorful context for conceptual essays—milestone murals like Steve Powers’ A Love Letter for You series, Haas & Hahn’s Philly Painting, Desirée Bender’s Design in Motion (the fleet of psychedelic recycling trucks), and How Philly Moves, the collaboration between photographer JJ Tiziou and muralist Jon Laidacker. 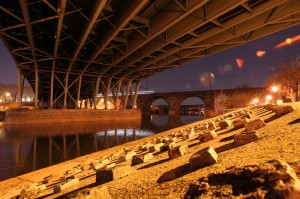 Before the mural: looking across the river under the Girard Avenue Bridge | Photo: Bradley Maule

Laidacker, now a Mural Arts veteran, will oversee the Philadelphia Rowing Mural project on the Girard Avenue Bridge later this spring. While not on the grand scale of that of an airport parking garage or a full city block of three-story buildings, it’s nevertheless a major mural, 16 by 100 feet (x 2) of color where city and nature merge. (Worth noting: while Philadelphia Rowing Mural is intentionally positioned to not face traffic, Meg Saligman’s 2004 mural Passing Through, not 100 feet away, looms directly over the Schuylkill Expressway at the sharp curve above Girard Avenue.) More directly, exercising an easy rowing motif, it recalls the past and Thomas Eakins’ many paintings of the subject with a modern skyline-and-Boathouse-Row bent. And of the bridge itself—whose predecessor Eakins included in many a painting—only the rusting steel-and-concrete rectangular portion will be painted. That is, the circa-1969 bridge’s signature stone foundations and handsome V-shaped steel trusses will remain untouched.

Considering Eakins brought his easel to work at this very spot and there is art aplenty throughout Fairmount Park, it ain’t so bad. And considering the Mural Arts Program resides in Thomas Eakins’ own home, renovated through $2M raised in a capital campaign, the Rowing Mural reads as MAP’s way of giving Eakins a more visible presence in a place he already resides.

Jane Golden and David Updike will read from Philadelphia Mural Arts @ 30 at the Central Branch of the Free Library of Philadelphia, 1901 Vine Street, at 7:30PM this evening.