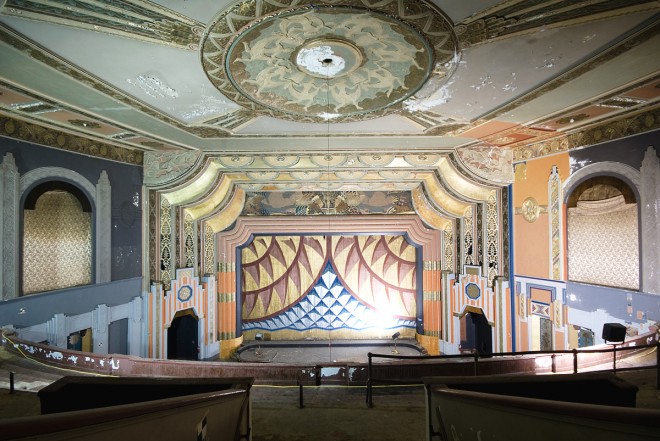 When an anonymous donor stepped forward last month with an offer to provide the funds for Friends of the Boyd to purchase the Boyd Theater, it seemed like a miraculous stroke of good fortune to advocates of the Chestnut Street movie palace. And perhaps that will turn out to be the case–but not without a fight from iPic Theaters and local developer Neil Rodin.

Rodin has agreed to purchase the property from its present owner Live Nation Worldwide and lease it to iPic, which plans to install eight movie screens and an upscale Italian restaurant. The Florida-based company is asking the Historical Commission for permission to demolish everything but the facade. The theater’s magnificent Art Deco interior is not protected, thus its fate is tied to whatever decision is made regarding the building’s exterior.

iPic and Rodin won the first round on February 27th, when the Historical Commission’s Financial Hardship Committee affirmed that iPic has shown reasonable cause to be granted a hardship and should be allowed to proceed with the project. The Hardship Committee’s recommendation is only advisory, and iPic’s application will go before the full Historical Commission March 14th.

The case will hinge on how Historical Commission members read the financial hardship section of the City’s historic preservation ordinance, which has been the subject of vastly different interpretations during several recent hearings.

To Friends of the Boyd and the Preservation Alliance of Greater Philadelphia, the presence of a legitimate buyer shows that iPic’s application doesn’t meet one of the three subtests for financial hardship–whether “the sale of the property is impracticable.”

“I think the standard is clear,” said Carolyn Boyce, executive director of the Preservation Alliance for Greater Philadelphia. “The offer on the table to purchase the Boyd is sufficient and the case should be closed.”

Boyce told Hidden City that she has met personally with the donor, a prominent backer of cultural and arts initiatives in Philadelphia. The offer, she said, “is sound and unconditional.” 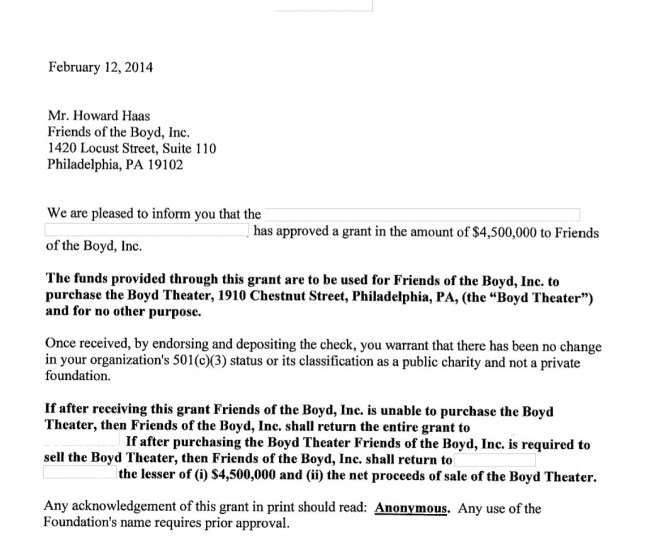 Redacted grant letter sent by the anonymous foundation to Friends of the Boyd, the Historical Commission and LiveNation

However, at the Hardship Committee hearing, iPic legal counsel Matthew McClure of the firm Ballad Spahr, argued that the anonymous benefactor’s offer didn’t change anything. The application, he said, should be judged on the larger question of whether there is a financially feasible adaptive reuse for the building. McClure said that the theater has had three owners since 2002, none of whom were able to redevelop the property. “A mere transfer of title does not eliminate the financial hardship, which is endemic to this property.”

McClure also said the Friends of the Boyd’s offer doesn’t prove that the sale of the property is possible because “this is not a sale as contemplated by the ordinance.” His interpretation echoed the City Law Department’s reading of the ordinance, as relayed by John Farnham, Historical Commission’s executive director.

According to Farnham, the Law Department told him that the question of whether the sale of the property is impracticable or not is intended as a test of the market generally, rather than the the interest of an individual purchaser, particularly one without any expectation of return on investment.

A representative of the prospective buyer will be on hand at Friday’s hearing, according to Howard Haas, president of the Friends of the Boyd. The offer of purchase, he said, followed months of discussion over how to jumpstart preservation of the theater.

Haas said he believes that to meet hardship, iPic would have to prove they can’t sell the building. “The wrong standard–and this is where the confusion is–involves the potential use of the building,” he said. “So far as I know there’s never been an instance where there was a would-be purchaser at the time that they granted a hardship.”

The Historical Commission’s hardship criteria, which has come under recent scrutiny in cases involving the Church of the Assumption and the mansion at 400 S. 40th Street, is vague, and, in fact, open to legal interpretation. It reads:

To substantiate a claim of financial hardship to justify an alteration, the applicant must demonstrate that the property cannot be used for any purpose for which it is or may be reasonably adapted. The applicant has an affirmative obligation in good faith to explore potential reuses for it.