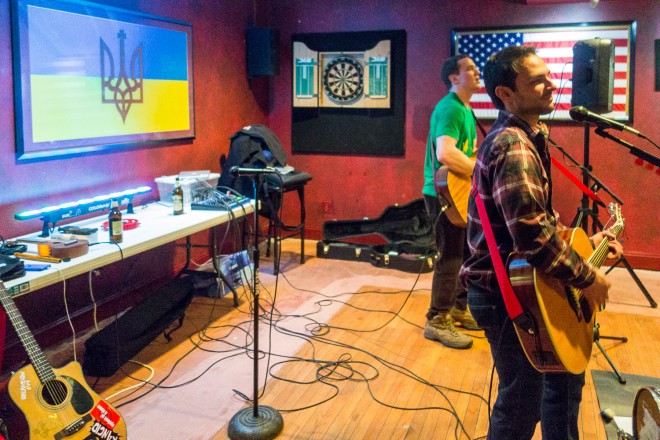 A folk band performs Ukrainian songs at the Ukrainian League of Philadelphia, with one English exception: “Royals” by Lorde, a song whose sentiment echoes the revolutionaries who overtook Viktor Yanukovych’s presidential palace | Photo: Theresa Stigale

Editor’s Note: The weekend before the Winter Olympics began in Sochi, contemporaneous to then-peaceful protests in Kyiv*, Liz Spikol and I went to Northeast Philadelphia to see if we could get a read on locals’ sense of the heightening tension between Russian and Western forces and ideals in Ukraine*. Liz’s grandfather, a Jewish immigrant, came to America from a town in pre-Soviet Ukraine: Shpykolosy, from which the anglicized “Spikol” originates. We visited a number of businesses and had a fantastic dinner at Passage restaurant, 10783 Bustleton Avenue. Still before the Olympics focused the world’s eyes on Russia, people were generally living life day to day, and there was no sense of apprehension or any predictions of coup or military mobilization.

But in the month since then, during the Olympics and especially since, things have happened so quickly that it’s been a challenge to keep up with, and even those who do have to be wary of the reports out of Ukraine and mindful of propaganda and outright lies.

Given her proclivity for compelling, human interest photo essays—such as those chronicling the likes of El Centro de Oro and 52nd Street and Woodland Avenue—Theresa Stigale immediately came to mind as my co-editors Nathaniel Popkin and Pete Woodall and I discussed what the Ukraine situation meant to Philadelphia.

Theresa’s multi-layered essay begins around February 12th and includes a visit to the famous Ukrainian Catholic Cathedral, a demonstration uniting local Ukrainians and Poles at the Municipal Services Building, and conversations with some of the leaders of the local Ukrainian community—all while events have played out in Ukraine, Crimea, and Russia in real time.

*Ukraine or The Ukraine? Kyiv or Kiev? In a story whose complications run deep, even deciding what to call the country or its capital can be complicated. (Business Insider has a nice explanation of this HERE.) In a nutshell, these are matters of language—yet another element at the heart of the Ukrainian-Russian conflict. As we wanted to hear from the local Ukrainian community, and they prefer Kyiv (pronounced “KEH-iv”) and Ukraine (no “the”), those are the terms used here. 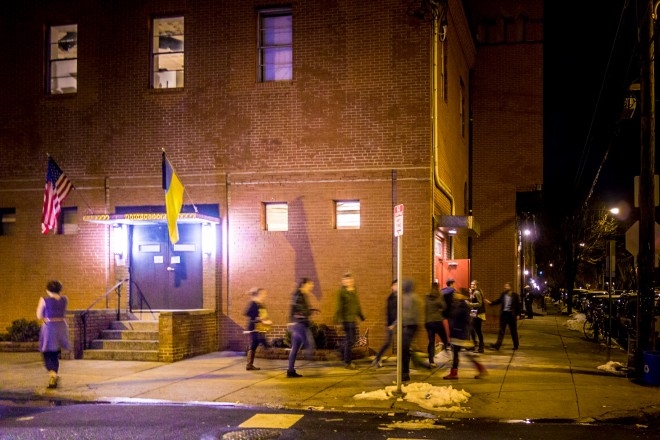 With former Ukrainian President Viktor Yanukovych in exile and an escalation of protesters overtaking his opulent palace, Hidden City checked in with the leaders of Philadelphia’s Ukrainian community to get their take on the news. Many local Ukrainians still have family in Ukraine and visit when they can.

We began with a visit to the Ukrainian League of Philadelphia (ULP), at their headquarters in Fairmount. The ULP, at 23rd and Brown Streets, is the social meeting place for one of several area Ukrainian communities, others including Northern Liberties (home of the Ukrainian Catholic Archeparchy), Northeast Philadelphia (particularly Bustleton and Somerton), and Jenkintown.

The ULP is run by a board of 15 volunteers including Yaroslav Kovaliv, the budget director for American Communities Trust, Marc Zaharchuk, a former poll worker (and bouncer at the ULP), and George Szwabiuk, a business attorney. A “Social” Membership is $10 per year and “Active” Memberships are $15; a basement bar serves Ukrainian beers and hosts live music. While we were there, a folk band played Ukrainian songs while people danced. A social hall, which the ULP rents out, hosted a square dance while an old timey band played. Just weeks before, Kovaliv organized an performance by the Ukrainian quartet DakhaBrakha, who were en route to Minnesota for a performance on A Prairie Home Companion. 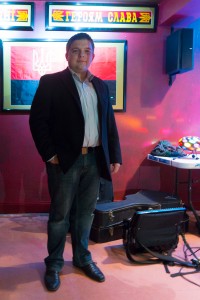 Yaroslav Kovaliv’s great-grandfather immigrated from Ukraine to the US in the late 1800s/early 1900s, uprooted by the Bolsheviks who took his land. Like most of his fellow immigrants at that time, they were also drawn to the US for steady work in the iron and steel mills, Baldwin Locomotive, sugar refineries, and other industrial plants.

Yaroslav and his parents moved here in 1996, leaving their home town of Drohobych after encountering some difficulties with their businesses: his mother ran a pharmacy in a small resort town in the mountains, and his father was a chief financial officer of a construction materials plant. They won a green card lottery and arrived to stay with their great-aunt, who hosted them at her home in Northeast Philadelphia while they got situated.

Watching current events from afar on this side of the globe, Kovaliv emphasized that the Ukrainian community in Philadelphia stands behind the people of Ukraine. “Our hearts go out to the 77 people who lost their lives [during the Euromaidan protests] and who showed courage to stand behind their convictions,” he says. “We also want Ukraine to know that their lives were not lost in vain and the the cause was just. There is an overwhelming feeling of support for our family and friends back home.”

In Philadelphia, as representatives of the Ukrainian League, he says, “Our number one challenge is to get people to understand the struggle.” 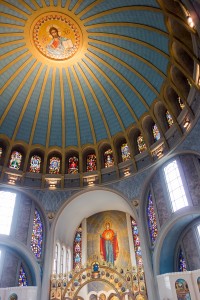 Under the dome at the Ukrainian Catholic Cathedral | Photo: Theresa Stigale

This past Sunday, March 2nd, I attended the Divine Liturgy (it’s not called a Mass) at the Ukrainian Catholic Cathedral of the Immaculate Conception, at the invitation of Rev. Ivan Demkiv. (He sat down with Hidden City co-editor Brad Maule last summer for a photo essay of the enormous modernist church with gold dome, built 1963-66 and designed by Julian Jastremsky.)

Rev. Demkiv said that the congregation and archeparchy are all very aware of the changes occurring daily and that they are thinking of their families back in their home country. “All of us here are praying for God’s help and the world’s help for Ukraine to be free.” During the 11AM (English) service, there was no explicit mention of Ukraine, but Rev. Demkiv said that he does talk about the turmoil in the home land at the earlier Sunday morning service, spoken in the Ukrainian language.

Father Subdeacon Roman Oprysk welcomed me outside of the cathedral just before the Divine Liturgy started. He explained that this particular day, the last Sunday before Lent, was “Forgiveness Sunday,” in which all church members are encouraged to ask forgiveness for any transgressions that they may have caused others. A timely and coincidental event, given the political climate back in their home country, the church service centered around peace.

Oprysk is from Mikholia, a small town in eastern Ukraine—a largely pro-Russian region—and still has family there. How are they doing right now? “They are as well as can be given the circumstances. But Ukrainians as a whole are pushing forward to be included in the EU. They are hoping for foreign nations to respect the sovereignty of Ukraine.

Expectedly, he puts his faith in a higher power for a resolution to the conflict. “We are all praying for special intentions and asking God to intervene with his wisdom and grant peace to Ukraine,” he says. 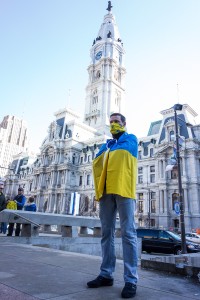 A pro-independent Ukrainian protester at the February 23 demonstration on Thomas Paine Plaza at the Municipal Services Building | Photo: Theresa Stigale

On Sunday, February 23rd, hundreds gathered on Thomas Paine Plaza, across the street from City Hall, to mourn the fallen and unite in support of an independent Ukraine, drawing support from communities across the Philadelphia region. The Ukrainian Educational and Cultural Center (UECC) in Jenkintown is at the heart of these communities.

Marko Tarnawsky, the center’s executive director, calls the UECC the nucleus of Ukrainian activities in southeastern Pennsylvania, a region home to nearly a quarter-million people of Ukrainian descent. The center occupies a former school building that UECC bought to repurpose as its headquarters.

Most of the UECC’s approximately 1,300 members live in Philadelphia and most of them have immigrated to the US in just the past 15-20 years. Members provide donations but there are as many as 8,000 Ukrainians who visit and use the facilities for various classes, events and functions. On Saturday mornings, about 300 students, ranging in age from kindergarten to 12th grade, study in the school there to learn the language and preserve Ukrainian culture. Each day, about 20 to 30 different Ukrainian groups may have meetings scheduled. Some groups also have space at the UECC, such as the investment clubs, the Ukrainian Self Reliance Federal Credit Union, the School of the Voloshky Ukrainian Dance Ensemble, and the Ukrainian Human Rights Committee.

As a 501(c)(3) non profit, the UECC is nonpartisan regarding politics. However, speaking as a US citizen raised by Ukrainian-born parents, and having lived and worked in Ukraine, Tarnawsky shares the collective point of view of Ukrainian-Americans. “We are extremely upset with the situation in Ukraine and are following the events very closely. We are hoping for stronger and positive reactions from the US government and some of that is already happening now.”

Referring to Ukraine’s independence from Russia in 1991, he is glad to see that, “after years of sleepwalking through their independence, people are now waking up to reality… Putin’s actions can be interpreted as viewing Ukraine as still being part of the Russian empire.” Improbable as it may seem with Vladimir Putin, Tarnawsky hopes that Russians are starting to realize the danger that they have caused and that they will back off.

By and large, the Ukrainian community in the Philadelphia area wants to see the Ukrainian people remain independent from Russia and maintain a strong Democratic and transparent society. To that end, this Thursday, buses from all over the US will travel to Washington, DC to show support for Ukraine. Supporters are going directly to the White House and the National Mall. Organized by the Ukrainian Congress Committee of America, this demonstration intends to urge US action against Russia.

The photos here are from the February 23rd demonstration in Philadelphia.