Fairmount Park: A New Map From An Old Style 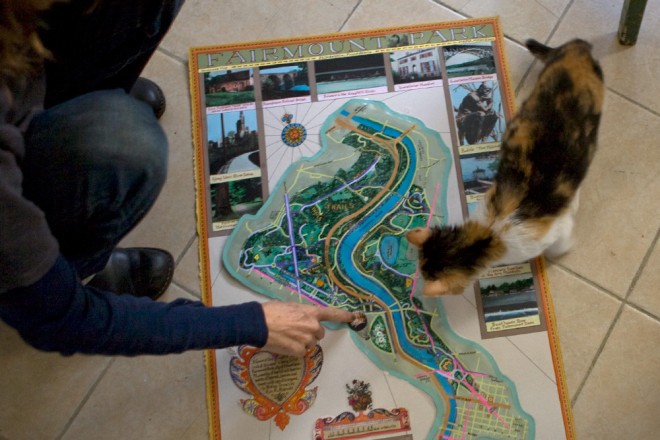 Artist Kim Alsbrooks laments with her calico kitten Pumpkin on the demise of the tiger-striped Zoo Balloon | Photo: Bradley Maule

In the 1990s, Kim Alsbrooks lived in Powelton Village, where she spent many an afternoon “goofing off” and riding her bike in nearby Fairmount Park. Overturning as many corners of the park as she could, she carried with her a circa-1970s map of the park, a Bicentennial era interpretation with insets of CAD-generated Fairmount Park historic houses and other park features. When she left to return home to Charleston, South Carolina, she purged a number of things, including this map. 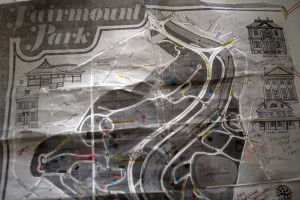 Alsbrooks used a facsimile of the map she used to own, taped together from sections xeroxed at the Free Library, as a source on which she made her own notes | Photo: Bradley Maule

When she moved back to Philadelphia in 2007, Alsbrooks was without a map. Dissatisfied with her options, she elected to put her artistic background to scientific work and make her own. She doesn’t mince words in speaking of her vision. “Fuck that Mapquest stuff,” she declares. “Those maps are all about cars.”

The 52-year-old’s South Philadelphia home is stuffed with gorgeous paintings, some her own and some from fellow artists with whom she’s traded works. An artist represented locally by Snyderman Gallery, Alsbrooks’ painting extends from canvas to wall—she’s done work with the Mural Arts Program—to whole building. Back in Charleston, whose antebellum downtown is its central draw, she worked in historic restoration; her late brother was a restorative carpenter. Here in Philly, her Luxe Painting company has colored homes of new construction and revived the flair of older ones for the better part of two decades.

Within this professional environment, she developed a deep rooted appreciation for historic preservation and attention to detail. Drawing inspiration from classical maps such as one of 16th Century Portugal and a number of maps found in two books, Tony Campbell’s Early Maps (1981) and Kris Harzinski’s From Here to There (a collection of hand drawn maps)—as well as a xeroxed copy of the 70s original she tracked down at the Central Branch of the Free Library—she started putting pen to paper. Or rather, she put paint to mylar, with gouache and her own photos from the park embellishing landmarks from The Thinker (the Parkway was designed to be the direct link between downtown and Fairmount Park, after all) to the Strawberry Mansion Bridge, from Sedgley Woods disc golf course to the Mann Center. The result, 18 months in the making, is a mixed media map worthy of your wall or your pocket. 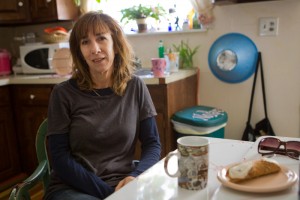 Currently, Alsbrooks has made the map available as a signed print, and has plans for a companion pocket map to be produced soon. With the fragile original sprawled out on the floor, she points out the bike lanes she’s featured prominently while her tiny calico kitten Pumpkin darts across it. When I asked her where the mountain bike trails are, such as those near Belmont Plateau, she replies, “dude, I have a Raleigh road bike.”

But more to the point, she reasons, “there’s only so much room on a map—you have to figure out what you can and can’t include. I feel fine leaving out some things and letting people discover parts of the park on their own.”

For more info, visit the web site Kim Alsbrooks has created for the map project HERE.