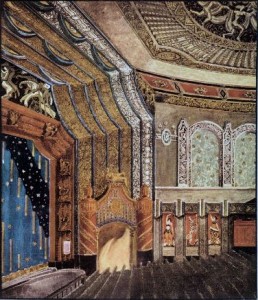 Editor’s Note: In response to the decision of the Historical Commission March 14 to grant the owners of the Boyd Theater a hardship exemption, clearing them, in effect, to demolish the Art Deco building’s monumental auditorium, the architect Katherine Dowdell, a long time preservation advocate, sent a critical letter to Sam Sherman, the Commission’s chair. Dowdell was appalled by the demeanor of the Commission, its failure at even basic procedure, and its continuous reliance on irrelevant information–much of it promulgated by groups in favor of demolition–in coming to its decision. That decision has left so many Philadelphians dumbfounded and feeling deeply distrustful of the very agencies charged with protecting the city’s cultural heritage. We asked Katherine to revise her letter for our “Soapbox” format, which you can read below. You can also click to her original letter, HERE.

The Historical Commission meeting and the two hardship committee meetings held to discuss the future of the Boyd Theater raised a number of questions. While this author strongly opposed the decision made, there are many concerns about the content and procedures of these meetings that should worry both sides of the issue.

1. The offer to purchase the Boyd, while arriving late in the game, significantly altered the applicant’s claim of financial hardship. Many people familiar with preservation ordinances and practices agree that a legitimate offer of purchase must be carefully considered. If the Commission had questions as to the legitimacy of the Friends of the Boyd offer, a continuance, as suggested by one commissioner, would have been a reasonable and prudent move. The Commission’s decision to dismiss this offer with so little discussion and with obvious skepticism does not seem based in fact, but rather in emotion and expediency.

2. It is understandable that the deteriorated and unattractive condition of the façade is a source of great distress to the neighbors. However, this is the responsibility of the building owners, Live Nation. It is not the responsibility of the neighbors, not the friends group, not the city. Why Live Nation is not being held responsible for the deplorable condition of the building is a mystery, but it is also an unrelated issue, though the Commission allowed it to be considered as an element in favor of the hardship application. The many complaints about the lack of upkeep were in fact irrelevant to either the building’s significance or the hardship claim, and should not have been allowed to continue.

3. The comments from various commissioners, at both the hardship meetings and at the full commission meeting, lamenting the lack of an interior nomination are likewise irrelevant. As was stated many times, each project is evaluated on its own merits. iPic reportedly started out hoping to use the entire Boyd Theater, but soon determined that their theater model would not fit within the existing building envelope. At that point, they decided to proceed with an economic hardship application, which would allow them to demolish the auditorium portion of the building. This was a deliberate decision. The financial data in the hardship application demonstrates that, for the iPic configuration, the auditorium could not be retained. It’s unclear how designation of the interior would have changed any of these facts. It is also important to remind commissioners that designation of the Boyd interior is within the purview of the Historical Commission. The Commission staff has written many significant nominations, and could certainly have done a wonderful job with a nomination of the Boyd’s interior.

4. At the continuation of the hardship committee hearing, one of the commissioners wondered if we are holding the Boyd to a higher standard than other projects, by the assumption and statements on the part of the applicants that no government dollars would be needed or made available to help balance the numbers. In a city where for-profit developers and companies regularly get public assistance and tax abatements for millions of dollars, this is a fair question.

5. Speakers both in favor of, and opposed to, a particular issue should be given equal time and treatment. If one side has a longer case, then it seems reasonable that they should have more time; however, all speakers should be required to stay on topic, regardless of which side they are on. The presence of rats or vagrants at a site, the odors emanating as a result, applause after a particular speaker, the winning of a Tony award, the knowledge of how to produce a Broadway play, and so on are all completely irrelevant to the significance of a building and an economic hardship claim. Additionally, special treatment of speakers during the public comment portion of the meeting gives the appearance of favoritism, even if that is not the intent. If someone with a “busy schedule” appears and is bumped to the front of the line, as happened at the first hardship committee hearing, it appears (and is) unfair.

6. These are public meetings. Minor annoyances such as reminding speakers to use the microphone (and having a microphone that can be easily used or repositioned by speakers), having enough seating, and so forth should be corrected to make the public feel welcome.

There are very strong feelings on both sides of this issue; it’s a very difficult one. Both sides are clearly biased. The people who cannot be biased are the Commission members. Sadly, at all three meetings, there was a clear appearance of bias in favor of the applicants. It is the responsibility of the entire Commission, but particularly of the chair, to make sure that commission meetings are fair and relevant to the issues at hand. For the sake of the Commission’s future integrity, the conduct of the Boyd meetings should be examined so that improvements can be made to ensure better public understanding and participation in this important, but currently flawed, process.