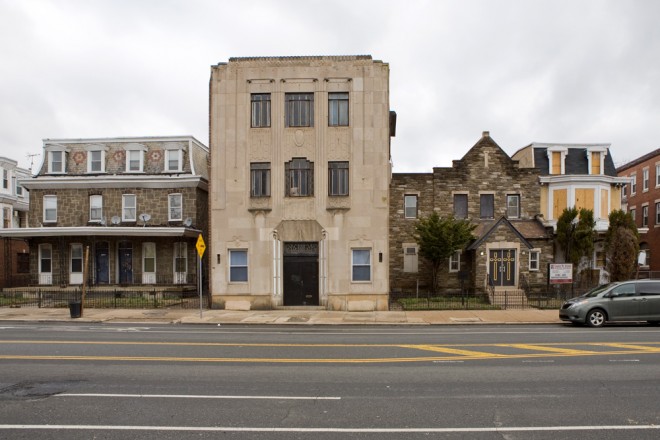 When traveling down West Lehigh Avenue, east of Broad, in North Philly, it’s easy to recognize the greatness that once blessed this neighborhood. Grand old bank buildings, large old mansions, and iconic places of worship still stand as testaments to a time when this area was a premier location. One particular building, however, stands out even more than the rest. An Art Nouveau façade at 1119 West Lehigh Avenue. This design and style, a rarity in our city, is embellished with floral patterns and vine-like structures. Its beauty comes from its perfect balance of simplicity and ornamentation. This intriguing building is the kind that makes my heart pound.

This property came about on one of the last undeveloped lots on Lehigh in the late 19th Century. Back then, this neighborhood served the nouveau riche, and the fancy large houses facing Lehigh Avenue were the homes of doctors, lawyers, and various levels of Robber Baron. Around 1900, one such Robber Baron, John Dunlap, Sr., owner of the John Dunlap & Son Carpet Mill (later known as Cambria Carpet Mill, a few blocks away at 11th & Cambria), had a massive home built here. The house looked nothing like what stands at 1119 West Lehigh Avenue today, but was a rectangular mansion set back from the street, looking more like a gigantic standalone rowhouse than the other mansions that still represent the northern side of this block. 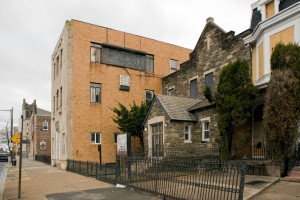 Dunlap lived there until his death, his son taking ownership thereafter. The junior Dunlap lived in the house until 1920. In 1921, Harold B. Mulligan’s Funeral Home moved from its original home at 2526 North 10th Street into the former Dunlap Residence. The house would not only be their place of business, but also the Mulligan Family residence. The setback from the street became a small parking lot. Over the next decade, the funeral parlor saw great success, constructing an addition along the back of the building reaching all the way to Silver Street, containing a garage and an undertaker’s workshop. Mulligan retained ownership of the old 10th Street location and made it into the Happy Times Lunch Club, a philanthropic concern that would provide hot lunches for school children. This was not Mulligan’s only philanthropic effort—he also helped found the Philadelphia Home for the Blind.

Around 1933, the iconic Art Nouveau frontage was added, eliminating the setback (unfortunately, the identity of the architect of this masterwork is lost to the ages). However, this was still not the final form of the building. In 1936, shortly after a small third story addition to the back of 1119 West Lehigh was complete, the mansion next door, 1117 West Lehigh, was demolished and a new addition proposed. The architect was Christian H. Fries, a prolific designer of both residential and industrial architecture. This addition was so mismatched from the original that few even realize that this is a wing of the same building. It appears to be a separate house with a stone exterior, seemingly given the appearance of being much older than its host.

The initial proposal met some resistance from the Zoning Board of Adjustments, but was eventually given a pass in late December of 1936. The new addition was complete by the middle of 1937. The expansion of the Mulligan property didn’t end there. 1121 West Lehigh, another old mansion from the late 1800s, was purchased by Mulligan in 1940 and developed as both apartments and an extension of the funeral home. More garages and workshops were added to the Silver Street side of that property. T.J. Fluehr, current owner of Harold B. Mulligan Funeral Home Inc., tells Hidden City that Mulligan’s apartments were often inhabited by members of his large staff.

Mulligan’s Funeral Home was a like a rock in this neighborhood, changing little as the immediate neighborhood went through wave after wave of change over the next half-century. Thousands of Philadelphians had their funerals hosted here. Over 2,800 funeral records from Mulligan’s parlor were recently discovered and placed in the possession of the Genealogy Society of Pennsylvania. They’ve even been digitized thanks to a successful Kickstarter campaign. Each record has an illustration of the iconic Art Nouveau facade of 1119 Lehigh. 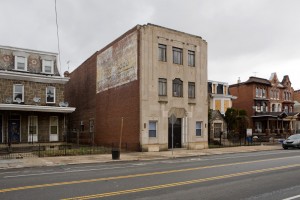 Who knew? A funeral home with a ghost (sign) | Photo: Bradley Maule

By the time Harold Mulligan died in 1972, the funeral home was operating out of three locations. His wife Gertrude took over the business until 1981 and sold 1117-1119 West Lehigh to the nearby Rome Emmanuel Baptist Church shortly thereafter. Mulligan’s Funeral Home is still in business at 11010 Knights Road in the Morell Park section of Northeast Philadelphia.

Rome Emmanuel Church used the property as their Community Outreach Center. They made thorough use of the building; housing administrative offices, homeless shelter units, and classrooms for the Emmanuel Baptist School. In the late 1980s, the garages and workshops fronting Silver Street were leased to an auto mechanic shop. About a decade later, the old Dunlap Residence/Mulligan Funeral Home was sold again and became the Greater Mount Vernon Baptist Church, who further altered the building’s internal composition. Its still operates as such to this day, using the building for church services, daycare, and senior housing.

Today, a funeral home exists only a few doors down from the old Mulligan, also operating out of a front-wise addition on an old mansion. Look up on the sides of the Art Nouveau gem for relics of the longtime inhabitants, with a ghost sign and an old clock on either side bearing the Mulligan name.