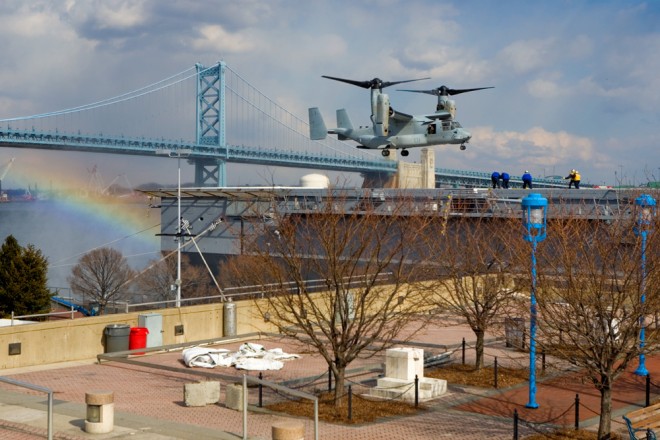 A V-22 Osprey lands on the flight deck of the USS Somerset, kicking up a rainbow spray in the process | Photo: Bradley Maule

With a ceremony to be attended by the Governor, high ranking US Navy officials, its shipbuilders, and families of United Airlines Flight 93, the USS Somerset will officially come to life at its commissioning tomorrow on the Delaware Riverfront. The 684′ warship—a San Antonio-class amphibious transport dock—has been docked at Penn’s Landing since last weekend, and will depart after this weekend for its home port of San Diego.

The Somerset is the third of three warships to be built and named in honor of the fallen of September 11, 2001, following the USS New York and USS Arlington, the latter named for the attack on the Pentagon (in Arlington, VA). Flight 93, of course, crashed in Somerset County, Pennsylvania, after a band of passengers fought back against hijackers; their rallying cry “Let’s Roll” is painted in large letters facing the flight deck, where a V-22 Osprey and SuperCobra attack helicopter each landed during a media tour yesterday.

Reminders of 9/11 extend well beyond “Let’s Roll,” however, and include several souvenirs from Somerset County such as road signs and a map of the county, a quilt memorializing all of the passengers of Flight 93, and a number of “Never Forget” insignias.

For more on the USS Somerset, see the official Naval page for the warship HERE; to watch its commissioning live, tune in to the official web site for that HERE.

The photos here were taken over the course of the past week. Click any of them to launch the gallery.