The Roots Of The Gayborhood, The Eve Of A Milestone 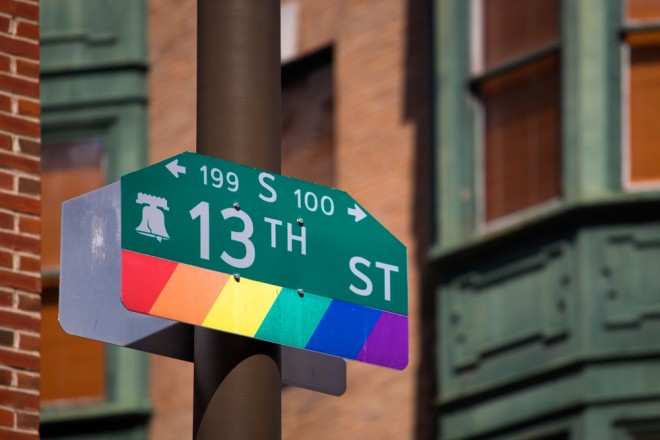 In 2007, on behalf of the City of Philadelphia, Mayor John Street dedicated 36 rainbow street signs in the area bounded by 11th and Broad Streets and Pine and Walnut Streets to honor the history and diversity of what we commonly call the city’s “Gayborhood.” And starting this evening, the Library Company of Philadelphia—at 13th & Locust in the heart of the neighborhood—will host an exhibition called “That’s So Gay,” which will pull back the curtains on their collection’s documented—and undocumented—history of homosexuality, the first show of its kind. It’s also the first in a year’s worth of celebrations that will commemorate the 50th anniversary of the gay rights demonstrations at Independence Hall from 1965-69. These events mark milestones in the area’s evolution from a seedy downtown commercial and entertainment district to a symbolic home to Philadelphia’s gay community.

Like many other urban centers in America, Philadelphia’s “Center City,” as it was starting to be called, expanded greatly after World War II. Center City served as an oasis of apartments and rental rooms in the middle of this “City of Homes,” providing privacy and urban anonymity to Philadelphia’s growing community of gay men, lesbians, and trans people. In the 1950s, Rittenhouse Square and the nearby coffee houses on Sansom Street—where jazz, espresso, and alternative beatnik culture flourished—took on an identity of the city’s gay geography. South of the Square, so many gay men were moving into the rows of red brick apartments that Philadelphians, straight or gay, commonly referred to them as the “Spruce Street Boys.” 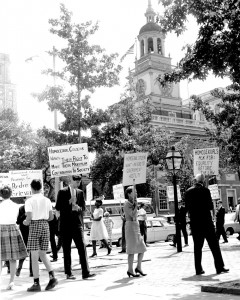 The LGBT presence in Philadelphia was growing so noticeably, that in 1962, Greater Philadelphia magazine (the forerunner to Philadelphia magazine) published an article by Gaeton Fonzi called “The Furtive Fraternity.” This somewhat luridly titled story was the first article the mainstream press would publish about an American city’s gay community. Despite its sensationalistic title, Fonzi’s article mostly managed to steer away from the lascivious, giving a fairly balanced picture of the problems that Philadelphia’s gay population faced and documenting the fledgling gay political scene here.

Only a few years later, beginning in 1965, activists from New York, Washington, DC, and Philadelphia would join together to sponsor annual “Reminder Day” demonstrations every Fourth of July, to remind Americans that gay men and lesbians didn’t share the protection and rights the Constitution guaranteed its citizens. Led by Washington’s Frank Kameny and Philadelphia’s Barbara Gittings, these courageous pioneers brought gay men and lesbians out in the open and gave birth to the modern movement for LGBT equality.

Forging an epicenter of Philadelphia’s gay culture around 13th & Locust

As early as the 1920s, because of their proximity to the hotels and theaters that lined Broad Street, Locust Street just to the east and the warren of tiny streets and alleys that surrounded it became a fashionable entertainment district. After World War II, it was home to jazz bands, chorus girls, and top nationally known entertainers like Fats Waller and Ella Fitzgerald. Philadelphians spending a night on the town would end their evening with a steak dinner and a nightcap at one of the area’s posh nightclubs.

By the middle of the 1950s, however, many of these clubs were replacing expensive first rate entertainment with cheaper and flashier rows of chorus girls. By the 1960s, organized crime took over many of the bars and the chorus lines morphed into cheap strip shows. What was once an elegant night club area, newspapers now dubbed “Lurid Locust.” The smaller “musical bars” tucked away on Camac and Quince Streets began attracting a predominantly gay and lesbian clientele. Savvy bar owners with mob connections knew how to pay off police to turn a blind eye to this fringe clientele. The City Police Department, under Commissioner Frank Rizzo, lumped Center City prostitutes, drug dealers, and homosexuals together as “undesirables.” If the police didn’t try to eradicate these marginal groups, they did try to control and harass them. Police raids on gay bars in Philadelphia were common through the early 1980s. 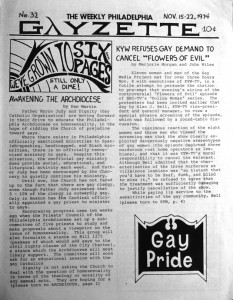 The radical LGBT politics of the Post-Stonewall 1970s changed the rules of the game. In 1972, Philadelphians held their first Gay Pride demonstration, with an estimated 10,000 people marching from Rittenhouse Square to Independence Mall, signaling the end of what had been a “furtive fraternity” and the beginning of a new, highly visible, politically active presence. By 1976, Philadelphia had a gay community center on Kater Street, the Philadelphia Gay News began publishing, and a campaign had been mounted to pass a citywide gay rights ordinance.

All of this had a profound effect on the character of the Gayborhood. Businesses now advertised themselves as being “gay owned and operated,” and the first Gay Business Association was formed. Gay men, lesbians, and trans people now saw themselves as active players in shaping their own neighborhood. They made their voices heard at community meetings and formed neighborhood crime watches.

By the 1990s, Philadelphia sponsored three major LGBT events: Gay Pride in June, the national Equality Forum in the spring, and Outfest, a commemoration of National Coming Out Day in October. At the 1992 Outfest celebration, City Paper’s David Warner offhandedly remarked, “it’s a beautiful day in the gayborhood!” And the name stuck. What had been Philadelphia’s downtown “gay ghetto” had become “The Gayborhood.”

In 2003, the Philadelphia Gay Tourism Caucus teamed up with the Greater Philadelphia Tourism and Marketing Corporation to launch “Get Your History Straight and Your Nightlife Gay,” a highly successful campaign to promote LGBT tourism here. In 2012, Locust Street from 12th to 13th Streets was dedicated as “Barbara Gittings Way,” in honor of her lifelong dedication to LGBT equality.

Today, the Gayborhood is anchored by the William Way LGBT Community Center on Spruce Street and Giovanni’s Room, the country’s oldest LGBT bookstore, on Pine Street. Upscale sidewalk cafes have replaced the hookers and drug dealers on 13th Street. The building at 13th and Locust Streets that once housed the All in the Family strip club now houses Nest, a playspace for Washington Square West toddlers. And of course, the “Midtown Village” marketing campaign has attempted to sterilize The Gayborhood’s identity.

A recently released Human Rights Campaign LGBT Equality Index gave Philadelphia 100 out of 100 points for “city laws, policies, and services.” A combination of political activism, business savvy and community involvement has transformed Philadelphia’s downtown gay neighborhood and will continue to energize it for years to come.

The exhibition “That’s So Gay,” curated by Connie King, officially opens with a reception at the Library Company of Philadelphia, 1314 Locust, at 5:30 this evening. LCP has created a web site and blog specifically for the exhibition at gayatlcp.org. Following that will be a lecture called “What Is Sex For?” by LGBT theorist David Halperin at the William Way LGBT Community Center, 1315 Spruce Street.