For part one of this two-part article, click HERE. 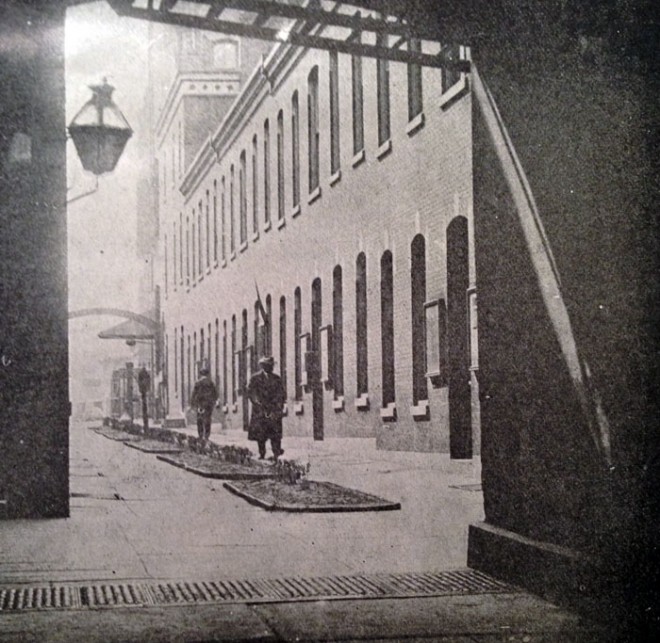 By the second half of the 19th Century, narrow alleys and cramped courts, once the home of mixed social classes, had devolved to house only the working classes and the downright poor. Public transportation allowed the social classes to segregate themselves into increasingly separate neighborhoods and streets, leaving the older neighborhoods the city’s poorest residents.

In the hot season especially, the stench arising from our courts and alleys is abhorrent to the senses, from the amount of putrid water in the gutters, and effluvia arising from the abundance of well privies, both which evils should be, if possible, removed. (Journal of the Select Council, Friday, October 12th, 1849.)

With an almost sixty percent population rise between 1840 and 1850, the city’s built environment was dramatically enlarged, developing well beyond the Old City boundaries in terraced rows of two- and three-story buildings. The once rural Philadelphia County of small independent settlements connected to the city by old thoroughfares like Germantown Road were woven together by the industrial and, in turn, residential development of the entire county into the modern City of Philadelphia.

…no new dwelling-house or other building within the city of Philadelphia shall front upon any street, alley or court which shall be of less width than twenty feet… (Act of April 21, 1855, Philadelphia.)

Also requiring twelve square feet of open space at the rear or side of each building, the Act of April 21, 1855 was a “solution” to the conditions of alleys and courts. The act also changed the development pattern of the city blocks and building construction moving forward. Such laws, coupled with the advent of streetcars and suburban trains, facilitated sprawling development and obviated the exclusive need of a more pedestrian Philadelphia.

The “Beautiful” Transition of Pedestrian Streets

Going against historic trends, more attractive, less usual types of pedestrian streets were developed. In April 1876, the last and perhaps oldest vestige of the Quaker Almshouse was taken down for reconfiguration of the 300 block of Walnut Street and the construction of Walnut Place. Nos. 312 to 322 Walnut Street consisted of six four-story brick buildings, at the center of which was an opening that led to the interior of the block where a “place” or “flower way” was formed by fourteen two-story brick office buildings, designed exclusively for pedestrian traffic. Walnut Place would survive for roughly fifty years when it would give way to a larger, more modern building.

Post-Civil War residential development included the occasional “place” of homes—both small and large, although these developments were also quite unusual and only a few survive today. In August 1870, the Public Ledger advertised houses for rent in St. Albans Place, a pedestrian street of Second Empire style houses in the block of St. Albans between 23rd and 24th Streets near Gray’s Ferry Road (now Grays Ferry Avenue). This block was made famous in M. Night Shyamalan’s breakout 1999 film The Sixth Sense.

Developed in part by Joseph James, the houses were described as “having modern conveniences facing a park adorned with fountains, vases and flowers…” which, by definition, is a pedestrian street. However, while pedestrian at the primary entrance, as the occupants undoubtedly used public transportation, there were also service alleys to the rear. 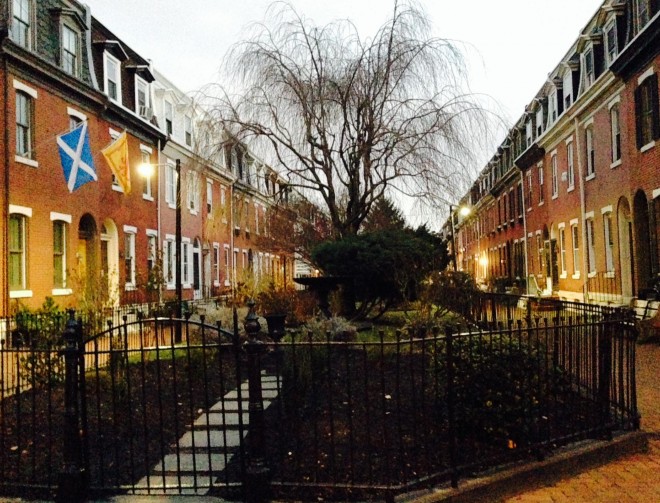 Those beautiful double front medium-sized Houses, with modern improvements and Park in front, ornamented with fountains, vases and flowers, in the vicinity of St. Albans, are now being finished, and can be purchased on accommodating terms. (Public Ledger. Philadelphia, 1872.) 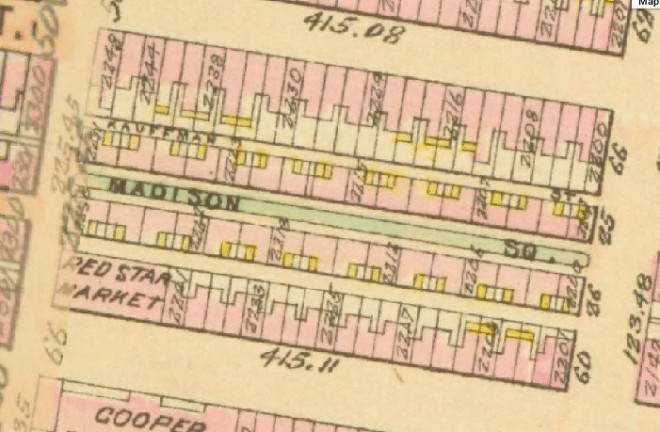 Just two years later, in August 1872, the two-block long “Madison Square” was being finished a block away. In this case, the configuration of the blocks was unusual not only because of the pedestrian, park-facing facades, but also because these houses were wide at the front and of shallow depth with no rear garden, the usual garden space being park space as a median in the pedestrian street. No doubt most working and middle class people preferred the standard type row house with a kitchen garden in the rear, as Philadelphians tended to be conservative and decidedly practical.

These pedestrian streets were limited in development for this purpose alone; although for modern use, they are beautiful architectural marvels, almost unique in the America of this period. Yet such streets are not unknown in other American cities. For example, Louisville maintains much grander, park-front pedestrian streets with detached and semi-detached mansions, such as St. James and Belgravia Courts, developed just after and on the site of the Southern Exhibition (1883-87). Private streets, such as Hortense Place, with closed gates and largely closed to thru traffic, were designed in the late 19th and early twentieth centuries in St. Louis. However, these too were limited in number. 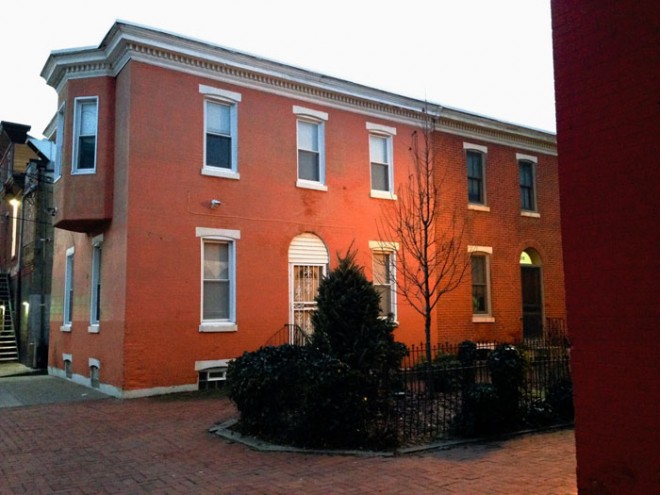 From the late 19th Century through WWII, Philadelphia developed farther out and even redeveloped, experimenting with occasional pedestrian streets. Almost always, developers used terraced houses, as was the almost exclusive local order. On the site of the old Children’s Hospital at 209 South 22nd Street, the space was reconfigured with a “place” in 1928. Featuring a gated entrance, St. James Place is a pedestrian street of Tudor Revival style row houses, ten homes facing north, ten facing south, comprising “English Village.” The extant court of houses appears almost as being out of a fairytale in the midst of the otherwise traditional Rittenhouse Square neighborhood. 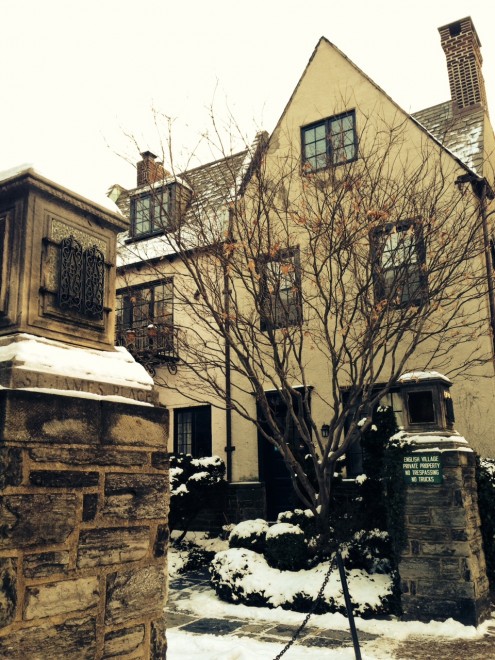 Looking southeast and opening off of South 22nd Street, St. James Place (carved in stone pillar on left)—known also as English Village, Circa 1928, features a “place” of three-story, Tudor Revival style houses facing onto pedestrian street of stone pavements with an “in case” vehicle thruway at the east end at a cartway | Photo: Oscar Beisert

A few blocks from St. James Place is another redevelopment of the same vintage. Bisecting the northern portion of the 2100 block between Walnut and Sansom Streets is a cartway known as Beechwood Street, which was a dense alley of houses since the mid-19th century. This block was redeveloped in the 1920s as a pedestrian street serving a cluster of Spanish Colonial Revival dwellings and apartments. There are various other redevelopments of a similar ilk throughout the city. 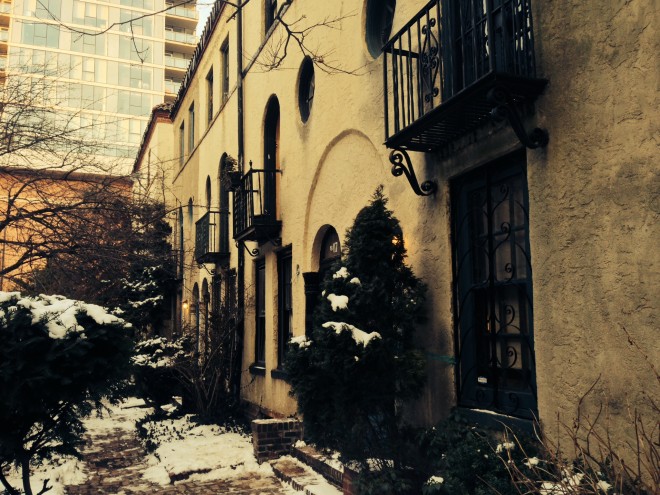 Looking north and opening off of Beechwood Street, built 1920s, was originally a cartway and was reconfigured into a footway, featuring a dense court of Spanish Colonial Revival style townhouses and apartments | Photo: Oscar Beisert

In response to the enlargement of industrial cities and, in turn, the widespread emergence of the slumlord in the first half of the 19th century, the concept of “Friendly Rent Collecting” was founded in London by Miss Octavia Hill in 1864. What was to become the Octavia Hill Association started abroad to redevelop existing buildings, improving comfort and sanitation of slums, while also turning a profit for the Association’s civil mind shareholders. Through the Civic Club of Philadelphia, the Octavia Hill Association of Philadelphia was incorporated on June 25, 1896 with 59 stockholders holding 268 shares at $25 apiece. The Association would go on to thrive in its efforts to “improve the living conditions in poorer residence districts of the city” while returning a modest profit for its shareholders. While the organization would certainly demolish buildings and build new model dwellings, one of its primary interests was to improve upon the extant built environment, and many old places in Philadelphia have survived because of the Octavia Hill Association. While pedestrian alleys and courts were certainly among the sites redeveloped, former small cartways were redeveloped through renovation of the buildings and closing of the small streets, making new pedestrian streets out of intended cartways in many areas of Philadelphia. 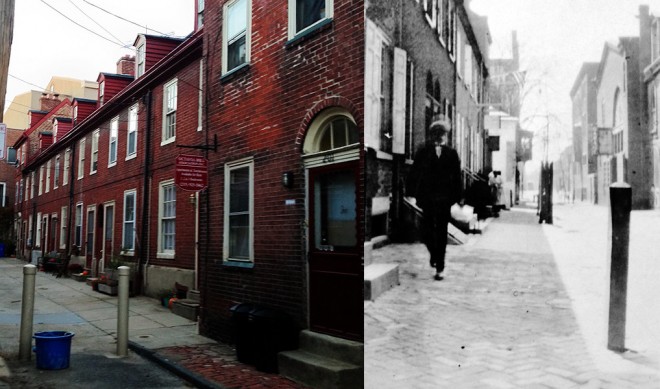 On left: Looking west, the 300 block of Beck Street, built pre-1840, features two-and-half and three-story red brick row houses, which are typical examples of Philadelphia’s long-lasting Federal style. (Photo: Oscar Beisert.) Once a cartway, the street is now pedestrian by bollards. Note the Octavia Hill Association’s rental sign at the corner of the first house. On right: once Dow Dean Street, later just Dean, and, finally, South Camac Street was originally a cartway, but closed to thru traffic with bollards by the time of the above early 20th century photograph.

In Queen Village, the 300 block of Beck Street (formerly Sommer Street and later Placid Place) contains 14 dwellings facing north and south onto a small cartway. At some point in the 1920s and ’30s, the Octavia Hill Association procured the buildings, and the street was closed to vehicles. Bollards isolate the block to pedestrians, which was a practice used even in the 19th Century.

This brings us to another type of pedestrian street: the cartway blocked to thru traffic, which would lead to a wide-range of modern pedestrian street types. In 1896, Octavia Hill’s first properties included 518 South Seventh Street and 705-11 Carver Street—all of which were renovated. By 1912, the Association had improved 17 sites, one of which, Marshall Street—part of the Girard Estate—consisted of 69 houses, once single-family, but by then a rooming neighborhood. Today, Octavia Hill maintains a number of alleys and courts that were always pedestrian and/or redeveloped into pedestrian streets when acquired. Some houses, like those found in Beck Street, still feature original interior details and configurations with necessary modern amenities. 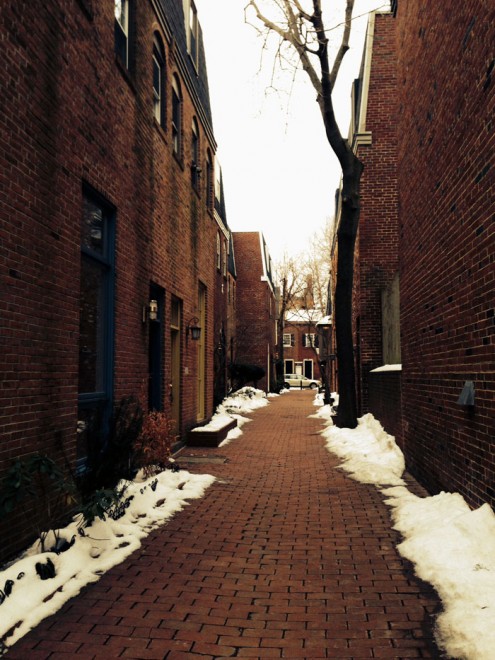 Looking west in the 400 block of South 12th Street, Addison Street is an example of the smallest type of cartway redeveloped as a pedestrian street in more recently years. The footway is also an example of late 20th era “pedestrian dwellings” of streamline modern appearance, yet with old Philadelphia red brick façades | Photo: Oscar Beisert

In the post-WWII years, Philadelphia underwent an incredible period of general decline due to the popularization of the automobile, deindustrialization, racial tension and white flight, all of which followed the national movement towards decentralization. Between 1950 and 1970, the city’s built environment decayed, and urban despair abounded. The idea of improvement was brought upon by the federal government first through urban renewal and later through revitalization of the extant built environment in older areas of Philadelphia. Neighborhoods were redeveloped with both public and private efforts towards attracting the middle class to return to city living. Independence National Historical Park was created in Old City, eliminating loads of buildings later than the Greek Revival period. The National Park Service’s plan created a number of open blocks punctuated by historic buildings in representation of Penn’s plan—an open, verdurous city that actually never was. Through this multi-block park and other historic parts of Philadelphia, notably the Ed Bacon-championed Society Hill, pedestrian streets were developed and integrated into the built environment of public buildings, as well as both historic and new residential development. This created resident walkways—new forms of pedestrian streets. In many areas, vacant lots that formerly comprised alley, court and dense residential space were redeveloped as pedestrian streets with new buildings—a new type of pedestrian dwelling.

Society previously associated pedestrian with the necessity, rather than a necessity of the city. So in order to understand it, we tore it down—only to rethink it, rebuild it, and perhaps most importantly, to reestablish it. The new pedestrian was in some ways an adapted, new form, “politically correct” requirement of the urban environment—public driven, rather than private. And, in summary, pedestrian has become an urban virtue, a luxury of urban life.