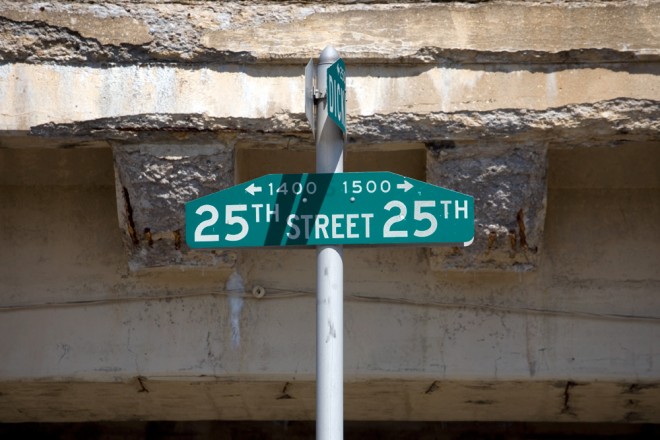 By all accounts, when you cross under the 25th Street Elevated, you best do so quickly. Make your Frogger-like move judiciously: cross the first lane of traffic, peer through the forest of thick concrete columns, then jump through the second and third lanes, minding the ranks of 3’ diameter pillars again through the last travel lane.

Of course, there are aerial threats, too. For almost 90 years, water has infiltrated voids, frozen and thawed, flexing the seemingly impenetrable concrete and seeping into the steel reinforcing bars. The strange gelatinous stalactites and surface discolorations suggest deeper chemical flaws in the concrete mix. As alkalis present in the cement react with aggregate material, the concrete exudes this hydrophilic gel which also expands when exposed to water. 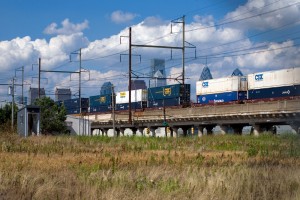 That portions of the elevated resemble the porous sandstone cliffs of the American Southwest rather than an engineered piece of railroad infrastructure can give pause. The structure’s regular shedding of concrete onto the roadway below has been noted since the late 1990s and continues to exasperate neighbors. But like so many urban structures built and maintained through private capital, the Elevated’s stock has fallen: from an evocation of high-minded public-private urban planning to some hulking linear death-trap, a structure whose infamy may be one hurtling hunk away.

To appreciate the sad demise of the 25th Street Elevated we should start at its noble origins. Under the Progressive leadership of Mayor Rudolph “Old Dutch Cleanser” Blankenburg (1912-1916), Philadelphia began groping out of its cave of myopic corruption towards enlightened City management. Blankenburg’s departments were stocked with new “efficient” managers armed with the scientific rigor and quantitative methodologies of the private sector, ready to organize, refine, categorize, and plan formerly unmanageable urban spaces. For architects and engineers, the aesthetic and planning paradigm of this reform was the City Beautiful movement—an attempt to rationalize, connect and beautify the basic civic, cultural, residential, and infrastructural regions of the City. Where the Fairmount (later Ben Franklin) Parkway was a City Beautiful project to formally organize the seats of culture and government along a parklike axis, the South Philadelphia Improvements saw a similar attempt to harmonize and beautify vast areas for residential, recreational, transportation and port-related activities. 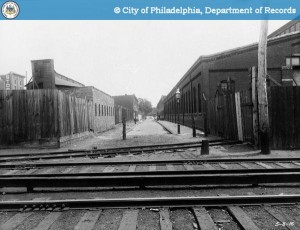 25th & Manton, before the elevated, circa 1916 | Image via PhillyHistory.org

At the height of their power in the early 20th century, the railroads dominated the physical landscape of Philadelphia. Yet Blankenburg’s administration had tired of the their oligarchical grip on land use in South Philadelphia. In an attempt to solidify their access points on the rivers, the Pennsylvania, Reading, and Baltimore & Ohio Railroads all built their own duplicative lines across the reedy marshland of South Philadelphia to approach their dockage and wharfs at Girard and Greenwich Points. Long gone was the early city ban on operating steam locomotives in the central core. Railroads were granted rights-of-way down city streets, down Washington Avenue, 25th Street, and Oregon Avenues, among countless others. In turn, the railroads forced lesser modes of travel to cross their grades at great peril. While in the early 1840s Philadelphia’s Kensington district was the site of physical resistance against at grade railroads, no opposition occurred in the sparsely-settled south. 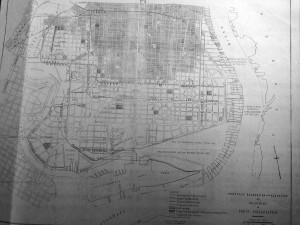 Conventional wisdom held that commerce, trade, and residential development were clotted by these steel tourniquets. Thus the object of the South Philadelphia Improvements was an undertaking at the heart of City Beautiful transportation design logic: separation of grades. By separating street and rail traffic, both modes would be free and unimpeded allowing the establishment of wholesome residential neighborhoods and ultra-competitive port facilities. A plan to establish a unified Belt Line Railroad—accessible to all railroads and jointly controlled—gained traction with the railroad companies but did not progress. In 1913 the Blankenburg administration’s Department of Public Works unveiled their ambitious plan titled, unambiguously, South Philadelphia, the abolition of grade crossings and the creation of opportunities for commercial and industrial development. It was the City’s first “comprehensive treatment of the whole rail problem” and it envisioned a vast complex of elevated freight rail corridors—primarily on Washington Avenue and 25th Street along with tremendous investments in new modern piers, wider commercial streets, new parks and a new residential subdivision scheme to create larger lot depths to mitigate against overcrowding.

Yet as with many urban megaprojects, life intervenes and priorities change. World War I consumed labor and material, and construction stalled until 1926 when the Sinclair and Grigg Company was selected to construct what the city’s Department of Public Works (DPW) called the South Philadelphia Track Elevations. Working closely with the Pennsylvania Railroad, the City’s DPW design branches established a chaste Art Deco update to the grade separation schemes. Designed for heavy freight utilization, the Elevated is massively built. The many Ionic columns standing 3’3” in diameter and 16’6” tall must hold up a nearly 12’ of plate girders encased in concrete above. Reflecting a 1920s economic optimism, the Elevated was designed to be expandable: at small openings on either side of the trackage the walls flair out into elevated spurs to businesses that never materialized. Sinclair and Grigg completed the project in 1928, only five months over the expected two year period. 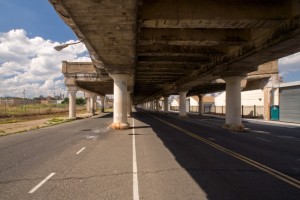 Between Dickinson and Reed Streets, flare-outs on either side would have extended rail lines that never came to be | Photo: Bradley Maule

Yet interest was flagging in the full program of track elevation along Washington Avenue. By 1935, a Depression-battered Pennsylvania Railroad tepidly reported to City Council that $20.7 million worth of improvements, including the Washington Avenue Elevated, had yet to be expended.

As an aesthetically-conscious elevated freight structure set in a dense urban context, the Elevated shares a common lineage with New York’s High Line which opened six years after 25th Street. Continuously used for freight for 86 years, the Elevated has served, and should continue to serve, freight and other transportation modes in the spirit of the original South Philadelphia Improvements. In the wake of citizen complaints about falling concrete, CSX replied that the structure is safe enough to allow 15 trains a day, a number which is set to rise with a marked uptick in crude oil freight rail traffic in the region. (The one that derailed on the Arsenal Bridge recently was on its way toward the Elevated.) At the very least the City and railroads must study the impact of potentially heavier traffic on the stability of the Elevated. With appropriate urgency, Councilman Kenyatta Johnson recently called for a Council hearing into the state of critical rail infrastructure, his district criss-crossed by rail infrastructure serving the new oil hub.

Yet the massively overbuilt structure affords so much space–both above and below for other transportation modes. Below, the column structure divides 25th Street into three roadways: a central two lane travelway flanked on either side by another 12’-14’ travelway and a largely unused parking lane. The question is whether traffic levels warrant a four-lane arterial or whether vehicular traffic can be shunted to the outer lanes with the inside lanes being a lit protected, signalized bike highway. By restricting car access in the center and improving lighting and the public realm at the cross streets, you begin to formalize the crossings and break down the physical barrier between Point Breeze and Grays Ferry. 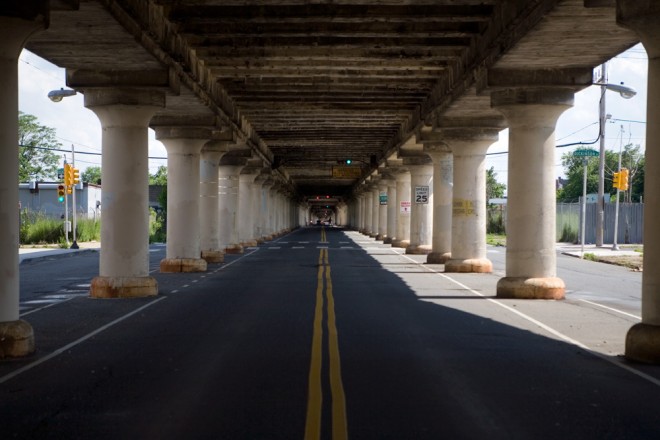 More opportunities exist above to supplement a robust north-south bus system with a light rail or regional rail utilization of the Elevated, in turn creating more direct Center City connections for Point Breeze, Girard Estates, and West Passyunk Avenue while potentially connecting to the Navy Yard-Stadium Complex with a further connection along freight rails north until a juncture with Delaware Avenue trackage. While SEPTA, CSX, and the entire freight industry appear to be moving away from commingling freight and rail traffic, the RiverLine is often touted as a successful model of joint operation with freight operating at night.

And yet the bridge still molders and one wonders what hurtling projectiles the Elevated may loosen when the weather warms. In its deferral of maintenance, the railroad continues to display what City Council identified in 2004 while negotiating access to the Schuylkill River Park “…a long pattern of contempt that CSX has shown to the people of Philadelphia.” However, it was precisely the antithesis of City-railroad contentiousness which brought about elements of the South Philadelphia Improvements. While the City prevailed on the Pennsylvania Railroad to depress its trackage under the Southern Boulevard (Broad Street) around the redesigned League Island Park preserving views of the river and Navy Yard, CSX’s deliberate legal campaign to bar Philadelphians from accessing public roads and parks over their trackage seems like a step in the wrong direction.

Though one facet of an unfinished program, the 25th Street Elevated represented a time when the public and private sectors could harmonize dissonant objectives to build infrastructure to support economic development while promoting a safe and attractive public realm. It’s time for our private railroads to re-embrace this model of collaboration. Fixing the Elevated would be a good start.