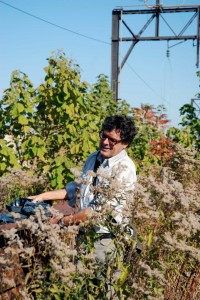 Few could dream the possible city as well as Paul vanMeter, the landscape gardener and founder of ViaductGreene, who died suddenly at a hospital in Reading Thursday night. “Today the world is on cusp of a hyper-urbanism of dramatic and disruptive change. Places that power our imaginations will drive cities forward,” he wrote in these pages, arguing for his vision of a three mile linear park connecting the elevated Reading Viaduct to the submerged City Branch railroad. Paul’s vision, the dream he incubated in a partnership with Liz Maillie, the co-founder of ViaductGreene, and later with Leah Murphy and Aaron Goldblatt, was to tap into the extraordinary ruin of the two railroads, infused as they are with history and time–and living flora–to create a world renown public space that would delight and lift Philadelphians. He was a certain, proud, and insistent dreamer himself infused with the experience of New York’s High Line and various transformational landscapes in Europe.

“Paul had a deep knowledge of horticulture practices and a great love for plants and digging in the dirt,” Leah Murphy wrote on the Friends of the Rail Park blog. “As a long-time railfan, Paul could easily recite the episodic history of railroad dynasties and ever evolving rail networks across the states. In some ways, the City Branch was just waiting for Paul to come along.”

Philadelphia born, Paul was moved equally by the ripe history of the Reading Railroad as he was by the fecund, wild landscape that had spontaneously emerged throughout the three mile ruin. Indeed, his great pleasure was leading small groups of people along the Viaduct and the City Branch, delighted by the landscape as it exists today. “The best and most memorable walk I ever took of the proposed park end to end was with Paul and a small group I had assembled,” TEDxPhiladelphia organizer Emaleigh Doley told me in an e-mail. “I remember from our walk that Paul didn’t really talk much about what it could be–both the City Branch and the elevated Reading Viaduct were already places in his vision. Paul’s rambling and wild style perhaps best fit the environment.” 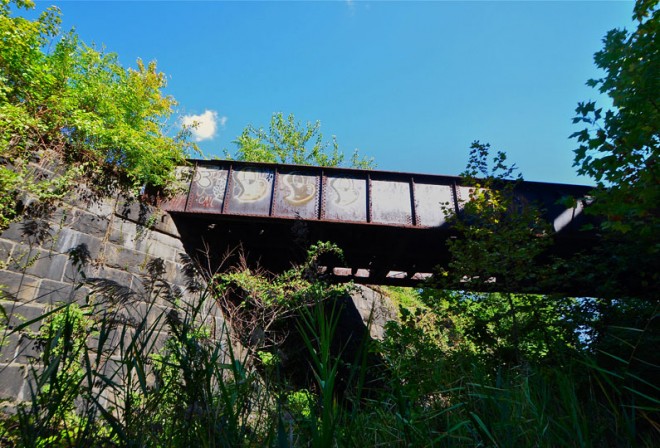 Photo: Friends of the Rail Park

VanMeter had his detractors, for nothing and no one should stand in the way of this dream. He challenged journalists (this one included), policymakers, and other advocates to elide to his ideas and strongly held notions about how the project should go. This led to inevitable friction and caused a split among ViaductGreene’s board last year. In the fallout, Paul held onto the name and logo of ViaductGreene. Maillie, Murphy, and Goldblatt renamed the organization Friends of the Rail Park, which later merged with the longstanding organization Reading Viaduct Project, and has become the de facto official project advocate.

These changes were clearly difficult for vanMeter, who kept giving walking tours of the Viaduct but otherwise found himself on sidelines. He was angered by and disappointed with coverage we and others gave to the project recently. But since the start of the year, he’d been working to bring ViaductGreene back into the conversation about the transformation of the rail lines. According to the organization’s website, in 2014 he planned a symposium on the “spontaneous garden” and an ideas competition for future designs. “…success—if you can put together some moments that actually go well, that give you something you can hang your…” Paul tweeted last week, quoting Philip Seymour Hoffman talking about the role of Willy Loman.

Earlier that day he tweeted from Joe Morgenstern’s tribute to Hoffman in the Wall Street Journal: “..by turns generous, self-deflating, grandiose, inscrutable and mysterious,” words that no doubt we could use today to describe vanMeter.

“Paul had one of those unquestionably one-of-a-kind personalities. He danced to the beat of his own drum, and that rhythm was on a whole new level of percussion. He always had something to say and, for better or worse, was never shy about speaking his mind. Though we didn’t always see eye to eye, his sharp observations and perspective were and will continue to be important to us,” said Murphy.

Philadelphia will indeed miss you, Paul. Your legacy is still being shaped by the unfolding project, but your contribution is certain. Without you and your passion for railroads, history, and plants, we wouldn’t be dreaming “a garden of intersecting culture and wildness along the soaring and submersive landscape infrastructures that are the Philadelphia and Reading Railroad 9th Street and City Branches.”