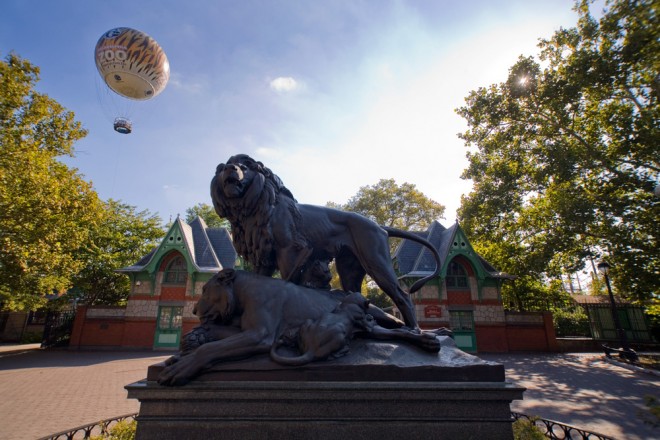 The Zoo Balloon has joined The Lioness and Frank Furness in the afterlife | Photo: Bradley Maule

On the same day the USS Forrestal set off on her final voyage—to a Texas scrapyard—Mother Nature sucked out the last breath of the Channel 6 Zoo Balloon. This winter’s snowfall after snowfall proved too much for the striped, tethered balloon, the second of two balloons the Zoo employed as a high rising attraction. 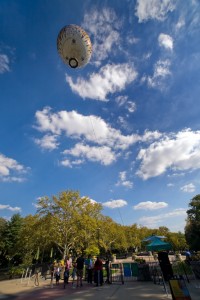 It was really getting up there | Photo: Bradley Maule

Manufactured by England-based Lindstrand Hot Air Balloons, the Zoo Balloon had a life expectancy of 5–7 years. The first balloon, with a giraffe motif, lasted six years, operating from 2002-08. In 2009, the Zoo unveiled the second balloon, featuring a tiger stripe design to coincide with the launch of Big Cat Falls and the Zoo’s 150th anniversary. This year would have been the second balloon’s seventh year, but the months long accumulation of snow and below freezing temperatures were more than the balloon could handle.

“It was a shock to us all,” said the zoo’s Chief Marketing Officer Amy Shearer this morning. “We weren’t prepared for such a fast farewell.”

Despite having a plan for removing snow from the balloon, the breadth of this winter’s snowfall combined with the balloon’s age expedited the retirement. “We just began teeing up our press information and meeting with WPVI to plan a ceremony [to be held after Labor Day], and we’d just started letting our members know,” Shearer said of informing the public of the zoo’s plans for the balloon.

What now? This all happened so fast that the zoo is figuring that out on the fly. “We weren’t yet sure if a third balloon would be brought on, as our Guest Experience Master Plan just began,” she explained, saying a decision would be made later this year. Needless to say, with the 42-acre zoo hemmed in by I-76 and the very busy Amtrak-SEPTA-NJT train tracks, the Zoo Balloon occupied desirable real estate.

Shearer did, thankfully, indicate that the balloon’s cadaver would not occupy a landfill. “We own the balloon, so we have a variety of options to consider; we just need to determine the best use for all that material,” she said. 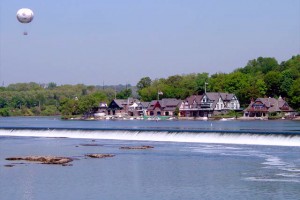 Since its first flight in 2002, the Channel 6 Zoo Balloon carried approximately 228,000 riders (including this writer at least three times) 400′ in the air, for views of the skyline, Schuylkill River and Expressway, Fairmount Park and West Philly, and beyond. With a roughly 100′ diameter, the top of the balloon rose 500′ in the air, about the same height as 1818 Market, the 11th tallest building in town.

“It was such an iconic part of our landscape,” lamented zoo Communications Director Dana Lombardo. “[Yesterday] was a sad day for all of us.”

On top of being the first zoo to offer balloon rides as a tourist attraction (at the first zoo in America), the Zoo Balloon had good superlative company. Per Lindstrand, founder of the Zoo Balloon’s manufacturer of the same name, took the first ride in the Zoo Balloon with Zoo and Channel 6 executives, and he accompanied Richard Branson in his transoceanic balloon flights (including the attempt to circumnavigate the Earth). The first manned balloon launch in America happened in 1793, when Frenchman Jean-Pierre Blanchard demonstrated his balloon with President George Washington, Vice President John Adams, and Thomas Jefferson and James Madison in attendance. Blanchard’s balloon launched from the Walnut Street Jail, sailed across the Delaware River, and landed in Deptford, New Jersey.