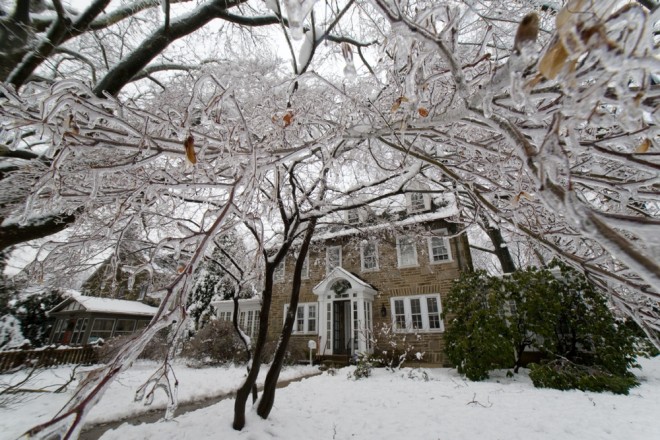 Sure it’s pretty—just don’t stand under any trees for too long | Photo: Bradley Maule

I can assure you, they make a sound. Trees fell in the woods and all across Greater Philadelphia during this latest douse of Winter 2013-14. Nearly a million people have no power, traffic and trains are a nightmare, the Commonwealth of Pennsylvania has become a State of Emergency, and more winter’s coming. Punxsutawney Phil doesn’t play.

For me, when snow comes, my immediate inclination is to get outside and bring my camera. An ice storm? That’s a rare treat, but one with serious risk when it’s adding extra weight to trees already burdened by snow. Anyone who’s seen the Ang Lee film The Ice Storm knows the danger.

In spite of the warnings—the every-three-minutes chunks of ice and snow Plinko’ing their way down the tree canopy, the sounds of sirens and chainsaws, and a suggestion from the Friends of the Wissahickon to not go into the woods—I headed for the woods. Not two blocks from home, with stuff falling all around me, I wondered if I should turn around and get my bike helmet. 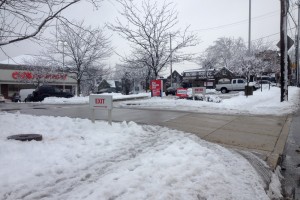 On the day CVS announced it would stop selling cigarettes, the $2B loss it will suffer for it was already being felt in Mt. Airy, where the poor corporation couldn’t even shovel or salt its sidewalk. (The driveways and parking lots were okay though.) | Photo: Bradley Maule

Lincoln Drive’s two final blocks in Mount Airy, between Mount Pleasant Avenue and Allens Lane, resembled a Currier and Ives print; the French Village looked like a fairy tale. Starting in on the slushy Cresheim Trail, the tumbling ice and snow became constant, and I wasn’t ten minutes into the woods when I saw a giant branch fall a good 60′ from a tree. Good time to turn around.

Having flirted enough with disaster, I returned to and stayed on city sidewalks—where they were shoveled. Most folks did a great job of keeping pedestrian thoroughfares clean: private homes, small businesses, apartment buildings. But some, like the CVS located at the prominent intersection of Mount Pleasant and Lincoln, and a number of the mansions lining Allens Lane, went untouched, leaving bipeds to their own devices.

Throughout the neighborhood, residents were clearing the woodland debris from their homes and yards, mail carriers and sanitation workers continued on business as usual, and I kept my camera as dry as I could while shooting these photos in West Mount Airy. Click any photo to launch the gallery.