High Priest Of The High Rise: Samuel I. Oshiver 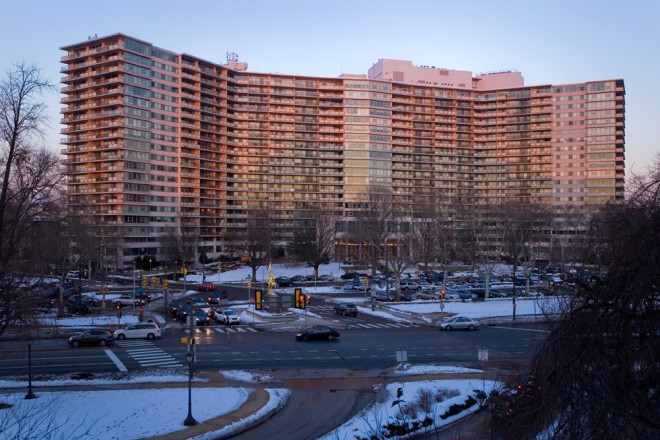 The Philadelphian in waning daylight; the golden Joan of Arc stands out even in the shade | Photo: Bradley Maule

Over the course of the mid-20th Century, one man brought an entire series of architectural landmarks to Philadelphia’s skyline, covering ground all over the city. Despite sparking controversy over his atypical buildings at the time, the works of Samuel Israel Oshiver remain prominent on the city’s skyline to this day.

Born in 1915, Oshiver received his Bachelor of Architecture from the University of Pennsylvania in 1940, and put his academic degree to use while serving as a naval architect during World War II. Upon his return from the war, he opened his own architectural and engineering firm, Samuel I. Oshiver & Associates. Greater Philadelphia magazine (the forerunner to Philadelphia magazine) dubbed Oshiver ‘the high priest of the high rise,’ as several of his firm’s mid-century modern high rise buildings cropped up from the early 1950s through the late 1970s. It was this period that Oshiver was most active, designing a series of mixed-use buildings which are still occupied and continue to be well received by their communities.

Among his most famous works lies The Philadelphian, often called the ‘vertical city.’ Comprised of 776 residential units, stores, a wide range of offices and recreational facilities, and of course Little Pete’s, the 21-story building is the largest single condo building in the city. Built for $20 million, The Philadelphian opened in 1963, and its 1.3-million-square-foot structure quickly came to dominate the skyline north of the Benjamin Franklin Parkway, across the street from the Philadelphia Museum of Art, whose balcony views draw higher prices than their north- and east-facing counterparts.

The value of art has never been lost on The Philadelphian’s identity. On top of the obvious proximity to the Art Museum, Mark di Suvero’s Iroquois (1983) and Victoria Davila’s Gamekeeper’s Night Dog (1989) flank the hulking structure. But it’s Emmanuel Fremiet’s Joan of Arc (1890)—Philly’s “Joanie on the Pony”—that’s emblazoned on the porte-cochère, stationery, and newsletter.

In his proposal for The Philadelphian, Oshiver designed a “Miami-looking” modern structure, comprised mainly of concrete and glass. His plans incorporated the installation of fountains and a colossal entrance made of columns, which mirrored the ones of the nearby Art Museum. Oshiver attempted to personalize each individual dwelling and designed balconies of generous sizes, even for studio apartments. He set up different carpets on each floor in order to break down the various sections of the buildings and to make its appearance less institutional. He also intended for the floor area to act as a gallery, filled with expensive pieces of art and luxurious ornaments. The penthouse of The Philadelphian was initially designed for the residence of the developer, and the top floors had higher ceilings than other units. The grandiose, villa-like appearance of the building was highly criticized by both architects and urban planners who felt that The Philadelphian’s proportions gave away an over-the-top, pretentious vibe, and that its rectangular structure and overpowering number of windows stood as a bulk within the neighborhood. 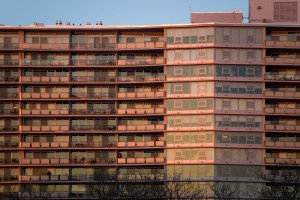 Some of Oshiver’s original balcony panels have been replaced by clear glass | Photo: Bradley Maule

However, the location, lifestyle, and multiple uses of The Philadelphian deliver exactly what the building’s developer, Max E. Cohen, had envisioned. At the time, Cohen was active as a lawyer, and had previously worked to develop homes in Northeast Philadelphia. In 1951, he bought an industrial tract near the Art Museum and expressed his desire to build an apartment house in that area. It’s worth noting here an urban legend that has floated the streets of Fairmount: that The Philadelphian’s architect committed suicide by jumping from the building, shamed by its ugliness. While that is wholly false—Oshiver died of natural causes at age 66 in 1982 and was quite proud of The Philadelphian—it’s true that the building’s developer did. With early occupancy severely low, Cohen became overwhelmed with over $1.25 million in debt. In 1965, Cohen and his financial partner, a New York developer by the name of J. P. Lieberman, were in the process of taking out further debt in order to catch up on backpay to their sub-contractors, when Cohen took his own life. Lieberman eventually managed to settle their debts with creditors, and the building’s occupancy stabilized. In 1980, the Philadelphian was sold to a condominium developer, Robert Sheridan & Associates.

With a population of over 1,100 people under one roof, The Philadelphian serves as its own polling district—and with a large elderly population, voter turnout is extremely high, often over 90 percent on presidential elections. Recently, the building’s architecture was again at the center of controversy, as a contingent of residents lobbied to modernize the building by replacing Oshiver’s original, yellowed balcony panels and honeycomb grills with panels of clear glass. Some residences have already been altered with this change.

In 1965, Germantown House opened to provide affordable residences to elderly citizens in that Northwest neighborhood. Located at 5457 Wayne Avenue, the 133-unit building’s eight stories are magnified by a row of arches across the top of the concave, curving façade. Currently, it also houses to the New Courtland LIFE Program geared towards helping the elderly maintain an autonomous lifestyle.

David W. Feldman, architect and president of Right-Sized Homes, a real estate development and project management firm located in Pennsylvania, interned with Oshiver & Associates in 1978, working specifically on the University Square project at 3901 Market Street. (That building has a community room named for the architect: Samuel I. Oshiver Hall.) 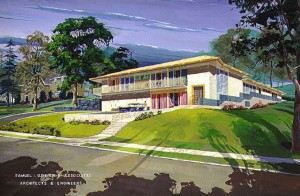 In spite of his better known peers—the Kahns, Klings, Stonorovs—Feldman described Oshiver as an innovator of his time, mixing different styles of contemporary architecture to create unique artifacts. He remembered Oshiver as a rigid, hardworking boss, but one also concerned with human welfare. “He spent his professional life trying to focus on how to give a sense of pride, dignity, and place to people, especially those living under subsidized housing,” Feldman explained. “His idea was that regardless of socioeconomic status, the residents of his buildings should inhabit a home which is aesthetically appealing, structurally functional, and which feels like their own.”

One of Oshiver’s earliest and more interesting works was that of his own residence in Melrose Park, built in 1948. On a street full of stately stone mansions, Oshiver’s home maintained a certain sunset boulevard motel feel.

In the 1950s, Oshiver fathered a pair of fraternal twins that give Rittenhouse Square an MCM touch. The Rittenhouse Claridge, on the northeast corner, and the Rittenhouse Savoy, mid-block on the southern edge of the Square, each opened in 1951.

Later that decade, his Cherry Hill Towers opened with a style that signaled the shift toward the suburban. (Cherry Hill Mall would open directly across Route 38 in 1961.) Sutton Terrace did the same on this side of the river, opening in Bala Cynwyd in 1960.

As a whole, his professional portfolio mirrors the marketable type of architecture prevalent in the 1950s through the late 1960s. In 1950, he joined AIA of Philadelphia and later became a member of the Citizens Council of City Planning in Philadelphia, where he continued to promote these architectural and human ideals through his death in 1982. 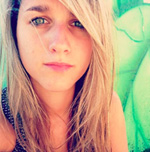 Agathe Dorel Agathe Dorel is a recent New York City transplant. After obtaining her undergraduate degree from McGill University, and her Masters of Arts in Urban Studies from Queens College, she moved to Philadelphia in order to broaden her horizons in the city of brotherly love. Born in France and raised in Texas, she has spent most of her life exploring the world through her numerous travels. Urban enthusiast and adventure seeker, she specializes in writing about the design and planning of cities in relation to the people that inhabit them.