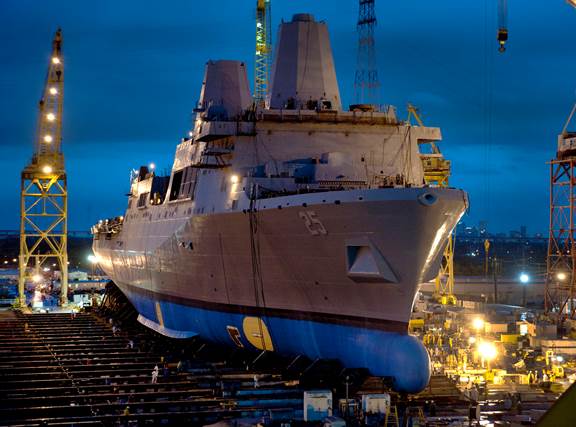 After weeks and weeks of relentless winter, from snow dumps to ice storms to earth shattering thunder, Mother Nature looks to finally give us a break this weekend—just in time to get down to the Delaware Riverfront.

On Saturday, celebrated man of leisure and Quizzo host extraordinaire Johnny Goodtimes marks a milestone with Quizzo Bowl X. The tenth annual trivia tournament of champions will take to the high seas Saturday afternoon—current forecast shows 56º and sunny—for a three hour tour on the Spirit of Philadelphia. Even if you’re no good at trivia, the drinks and music onboard should go well with sunset over the Philly skyline as seen from the Delaware River. Check out JGT’s web site for all the details and tickets.

On your way to the dock, allow yourself a few extra minutes to walk along close to the river, as the USS Somerset (LPD-25) will make Penn’s Landing a port of call for the next week or more. Arriving at approximately 11am tomorrow, February 21st, the Somerset will dock at the foot of Market Street and stay through its official commissioning on Saturday, March 1st.

The 684′ amphibious transport dock is named in honor of the passengers of United Airlines Flight 93, whose flight crashed in Somerset County, PA on September 11, 2001. Built in Louisiana, the ship’s construction includes 22 tons of steel from a crane that stood at a strip mine near the site of the crash, as well as flooring from pines harvested in Somerset County.

The USS Somerset will be available for public tours February 23-26, 1-4pm. It will remain docked at Penn’s Landing until an undisclosed date after the commissioning (on 3/1). PLEASE NOTE: For security concerns, the Great Plaza and river walk between the giant concrete pi and the ferry terminal will be closed. The RiverRink will remain opened (through March 2nd). So you can get close, but not that close. Plan accordingly.