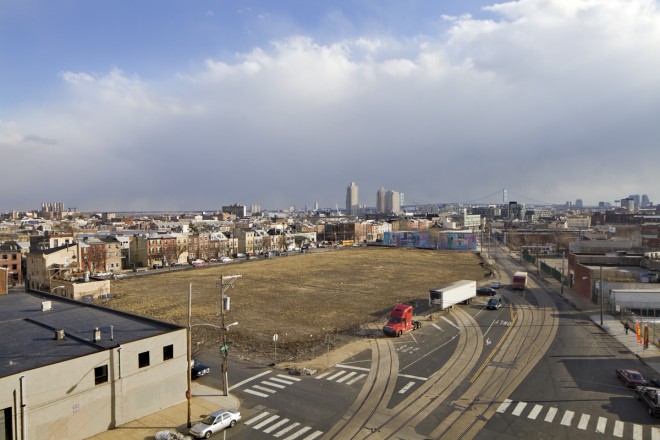 Note: For Part One of this three part series on the future of South Kensington, click HERE.

It’s only a matter of time before luxury apartment renters arrive on American Street just above Girard Avenue–blocks from the El stop, from the bars on Frankford Avenue and from the Piazza. Last November, Philadelphia’s Zoning Board of Adjustment approved Brickstone Realty’s 191-unit development planned for Thompson and American Streets, and there are another 600 residential units approved on nearby blocks of South Kensington, in the heart of a district long protected for industrial use.

The largest project, and to date, most controversial, is the Soko Lofts, a 278-unit development planned by the Canus Corporation on 2.6 acres of vacant land kitty corner from from the Brickstone project. More than seven years of planning later, there’s no construction yet and the site is for sale. A contentious negotiation process lays bare the conflicting interests of the developer, businesses, community groups, and the city.

The local civic group, South Kensington Community Partners, says it welcomes new neighbors to fill once empty lots and support local businesses, with the caveat that new buildings fit the scale and character of the area. Residents are learning, however, that despite extensive opportunities for input, the designs they agreed to with the developer may have little to no bearing on what the final product looks like. The Soko project has doubled in scale once; it could easily double again. Immediately after it received its permits last fall, Canus listed the lot for sale; neighbors who fear they were victims of a bait-and-switch have to wonder if they’ve lost leverage over the project. 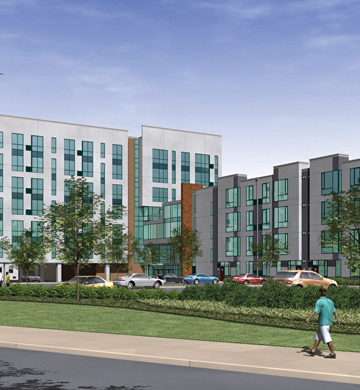 At first glance, Manayunk-based Canus Corporation seemed an unlikely candidate to build a junior version of the nearby, 414-unit Piazza at Schmidt’s. The Manayunk-based company headed by Susan and Paul Rabinovitch had a creative real estate portfolio that included redeveloping properties for affordable housing and senior housing, as well as a number of historic preservation projects. However, the company did have experience with brownfields. In 2006, the company built an affordable senior housing development on the site of a former brownfield in Ardmore. And the company had experience working in North Philadelphia. Canus worked closely in the early 1990s with neighborhood CDCs to redevelop the former St. Christopher’s Hospital site at 5th and Lehigh into the Lehigh Park Center. What Canus did not appear to have done much of–the Rabinovitchs did not answer repeated requests for comment–is build new market rate housing, particularly on the scale proposed for the Soko Lofts site.

Nonetheless, collaboration between the developer and the community seemed promising in 2006 when Canus first proposed building the Viridian, a 160-unit condominium complex. The Soko site, surrounded by other vacant parcels, had been a scrap metal facility owned by the Absco Steel Company and before that a Philadelphia & Reading rail yard (railroad infrastructure accounts for the wide scale of American Street). The Environmental Protection Agency had designated it a Superfund site–meaning it was heavily contaminated. Certainly, residents welcomed a plan to clean the site and replace it with new development. Lois DiDomenico, then chair of the Zoning Committee of the Kensington South Neighborhood Advisory Council, testified in 2006 to City Council in favor of Canus’s proposal, which called for seven-story and four-story residential buildings, as well as commercial artist and craft-person space fronting on American Street. “You can be sure that this is a bill that [had] community-based support and we’ve worked very closely with the developers,” DiDomenico said at the hearing. 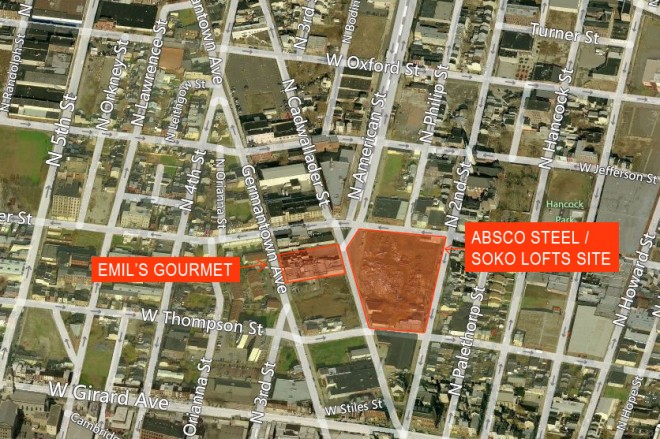 Council granted a mixed use zoning designation to what had previously been industrial land to facilitate the project, while leaving a 26-foot buffer of industrial zoning along American Street to assuage fears from business owners that residential and retail use would overwhelm the area, “a kind of symbolic acknowledgment that everyone was going to live together, work together, and we weren’t going to interfere with each other,” Canus attorney Carl Primavera said in later testimony. A decade before, in 1996, an industrial food processor, Emil’s Gourmet, moved into a small factory building across the street and now they were remediating another Absco lot next to their facility, cementing, for the time being anyway, industrial uses–and the presence of machinery and tractor trailers that comes with it–in this lower zone of American Street just north of Girard Avenue.

In the meantime, Canus obtained a 20-year, $7.6 million loan at 1.1-1.7 percent interest from the Pennsylvania Infrastructure Investment Authority (PennVest) to remediate 28,000 tons of toxic material at the site, removing the top four feet of tainted soil. Construction on the buildings did not begin, however.

Community members say they were surprised when Canus came back in 2012 with a proposal for a much larger building: as tall as seven stories, with up to 320 units. Paul Rabinovitch also asked to rezone the industrial strip along American Street to accommodate the new plan. The developers later testified that going forward with their original design was no longer feasible due to economic pressures from the 2008 recession.

Instead of applying for a variance through the Zoning Board of Adjustments, which would have brought approval for a specific plan, Canus requested a City Council ordinance to change the zoning of the site (as we detailed in yesterday’s story, most of North American Street is still zoned industrial). Due to the tiered nature of the city’s zoning code, the classification needed to allow the 278 -unit building would carry the right to build around 600 units on the parcel. Since the plan had already changed once, residents’ suspicions were aroused. “There’s a question about trust and good faith there that we are not comfortable with,” city planner Leah Murphy, a board member of South Kensington Community Partners and co-chair of its Planning and Zoning Committee, testified during a Council hearing on the new plan last year.

The bill was introduced in April 2013, and the approval process moved forward. The City Planning Commission held a hearing on the proposed changes in May, and the Civic Design Review Committee reported favorably on the plan, finding its scale complementary to the neighborhood and ample public space between the buildings.

However, Council President Darrell Clarke, who represents the district where the parcel is located, held off bringing it up for a vote until the community and the developer signed a separate agreement negotiated in cooperation with his office. The agreement stipulated a maximum of 320 units along with other accommodations, mandating another review process for any major changes made by Canus or any subsequent purchaser of the land.

“Essentially what we were trying to do was get them to commit to certain parameters that were set in their proposed design, like the height of the buildings and the number of units,” Murphy told Hidden City. “We also wanted to get as active a presence as possible along American Street.” The developer eventually signed off on the residents’ requests, but there’s a catch, now that the parcel is for sale: will the agreement signed in Clarke’s office withstand a challenge in court? With little legal precedent to rely on it’s unclear if a new developer will legally be able to build a 600 unit project.

“Our hope is that it is a binding agreement,” Murphy said. “If we need to take steps to enforce it, then that’s what we’ll do.” 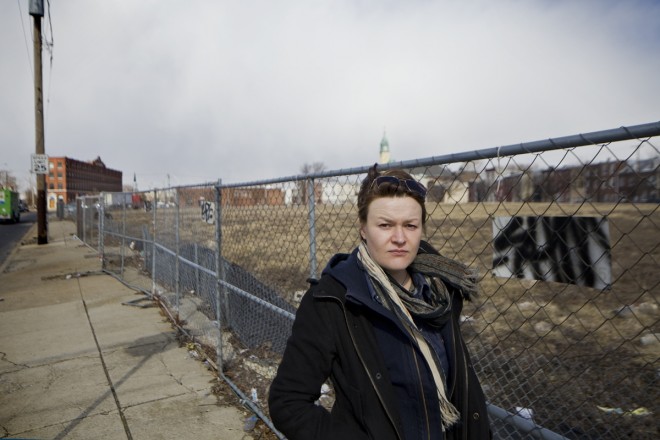 The Future of the Site

While the language in the Council ordinance contains numerous references to the agreement, multiple members of the Nutter administration confirmed via consultation with the law department that since the site was granted high-density zoning, the bottom line is that developers could by right get a permit for a building that has nearly twice as many units as Canus’s plan. The community would then have to use the agreement to try to challenge the permit in what could turn into a messy and prohibitively expensive court battle.

“The city takes a risk that you will be true to your word and do what you said you are going to do. But there are no reassurances,” said William Kramer, director of the Development Planning Division of the Philadelphia City Planning Commission. “In this case, they put clauses in the bill, but they are not binding in terms of the zoning classification change.”

There could still be obstacles for a developer who tries a bait-and-switch. “The good news is typically if these things change there’s often something that someone needs from us to make it work,” said deputy mayor for economic development and commerce director Alan Greenberger, citing requests such as more parking spaces or curb cuts, where the city could hold up approval until the developer came to some type of new agreement with the community. “Also most developers do not want to do things that are going to cause the entire community around them to raise holy hell,” Greenberger added.

The city’s new zoning code that went into effect two years ago requires that developers seeking zoning changes consult with relevant civic organizations, but the final say on project approval lies with the Zoning Board of Adjustment or City Council. “It’s not like you’re making decisions. You’re making recommendations,” said Larry Freedman, chair of the Northern Liberties Zoning Committee, who has been through the process countless times since he joined the committee in 1986. “Neighborhoods are coming from one angle, developers from another, and businesses from another. One way or another everyone has to understand everyone’s needs and requirements or else things don’t get done.”

After the community gave its apprehensive approval, the ordinance was passed in October and signed into law by the Mayor on October 23, 2013. But still no construction began. Instead, within a month the land was listed for sale by real estate firm Newmark Grubb Knight Frank, advertised as a “shovel-ready site” approved for 320 units–but the sale literature includes a reference to the zoning’s allowance for 600-plus units “by right.” The firm declined to comment on the sale, although an executive told Business Insider in November soon after it had been listed that there was interest from local, regional, and national buyers. 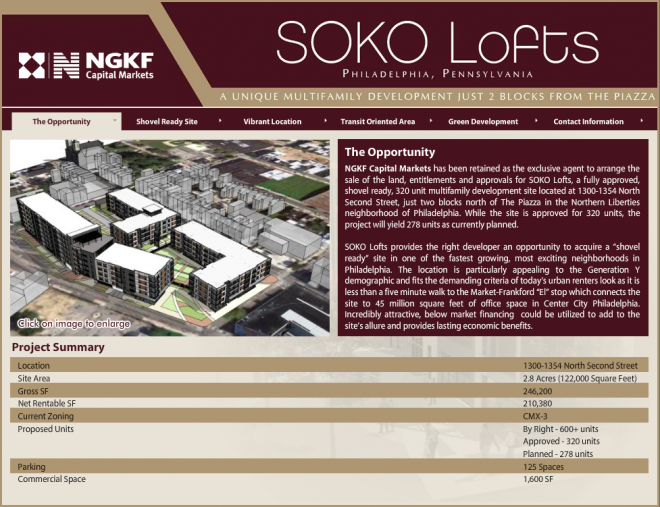 Screenshot of the Newmark Grubb Knight Frank listing for the Soko site.

Community members see the quick flip as validating their suspicions of the developer. “Canus’s marketing the development site as one that would allow more than 600 units is very much in conflict with the substance and spirit of the agreement we executed with them through Council President Clarke’s office,” Murphy said.

A Clarke spokesperson refused to comment on either the process of the negotiations or the property’s for sale listing. Paul Rabinovitch, vice president of Canus, also declined comment.

Beyond issues of zoning per se, it’s unclear if a new developer would be able to draw the financing needed to build something with 600 units–or if the neighborhood could absorb such a supply. Counting Soko’s 278, there are already some 800 new residential units approved within a few blocks and an additional 300 plus could outpace demand. Even at 320 units, the project may have been too difficult to finance. Large scale projects haven’t yet jumped Girard Avenue here; even in the Northern Liberties a few comparably size parcels remain.

For now, residents wait. They can’t do much until a buyer comes along, presents a plan, and indicates their willingness, or not, to cooperate with the community.

“We have no idea what a future developer might want to do with that site. It seems pretty up in the air at this point,” said Murphy. “We’re waiting to see what happens next.”

Tomorrow: A manufacturer holds on