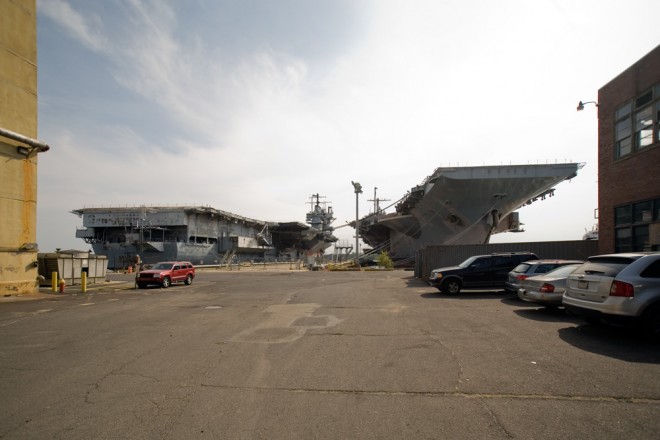 For all the progress and promise at the Navy Yard, of Urbn empire and modern pharma, of Butterscotch Krimpets and a subway extension that’ll probably never happen, one can surprinsingly forget the naval roots of the complex, despite all the massive reminders. At the foot of Broad Street, two massive aircraft carriers loom over Urban Outfitters’ buzzing cafeteria: the USS John F. Kennedy (CV-67) and the USS Forrestal (CV-59). Tomorrow, the latter will undock and set sail for Texas, where the historic ship will be scrapped and recycled.

The Forrestal, named for the first US Secretary of Defense, James Forrestal, was the world’s first supercarrier, giant aircraft carriers that are the largest warships ever built. (They are to ships what supertalls—those over 1000′, like Comcast Innovation & Technology Center—are to buildings.) 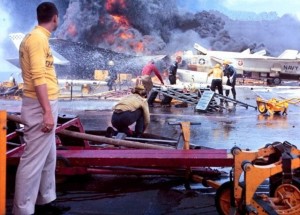 Ordered in 1951 and commissioned in Cold War America’s 1955, the 1,067′ Forrestal served the US Navy for 38 years. Despite its notable distinction as the first supercarrier, the Forrestal is most remembered for a disastrous accident. On July 29, 1967 while stationed in the Gulf of Tonkin at the height of war in Vietnam, a power surge accidentally fired a rocket across the ship’s deck, striking another jet, igniting a chain reaction of jet fuel explosions that left 134 dead, 161 injured, and 21 aircraft destroyed, including Lieutenant Commander John McCain’s A-4 Skyhawk.

In 1976, the Forrestal served as host ship during the International Naval Review in New York Harbor, and President Gerald Ford rang Bicentennial Bells on the Fourth of July from its deck (after marking the nation’s 200th anniversary with a speech at Independence Hall). In 1992, the Forrestal arrived at the Philadelphia Navy Yard for a massive overhaul, but a year later, the Navy decided instead to decommission, and did so with a ceremony on September 11, 1993.

The carrier spent most of its post-active duty berthed in Newport, Rhode Island, where the Navy made the ship available for use as a museum. With no capable takers, the Forrestal was designated for disposal in 2003; in June 2010, it was moved again to the Naval Inactive Ship Maintenance Facility at the Philadelphia Navy Yard. In October 2013, the Navy sold the historic ship for $0.01—a penny—to All Star Metals, a scrapyard in Brownsville, Texas.

Tomorrow, beginning at 4AM and weather permitting, the towing vessel Lauren Foss and three additional tugboats will assist the Forrestal in its final voyage, after nearly 60 years in the water.

Basically, anywhere along the Delaware River below the Navy Yard with public access should make for a fine viewing area. Some suggestions:

• Fort Mifflin: The portion of the grounds outside the fort proper (the site of Ruins at High Battery during the 2013 Hidden City Festival) includes a seawall and mini-beach along the Delaware.

• National Park, NJ: Starting at Red Bank Battlefield and curving northward, public green space allows for viewing directly across the river from the Navy Yard, with the Philly skyline rising in the distance.

• Chester Riverfront: Next to PPL Park, a riverwalk winds along the Delaware under the Commodore Barry Bridge.

• Marcus Hook: Wedged between Sunoco’s refining operations is a small municipal park right on the river.

• Fox Point Park: Situated on a bluff in northern Wilmington, DE, Fox Point Park provides sweeping views of the Delaware and neighboring DuPont facilities. On a clear day, you can make out the Philly skyline.

• Pennsville, NJ: Just south of the Delaware Memorial twin bridges, a relatively wide beach provides a nice vantage with the bridges and Wilmington skyline as backdrops.