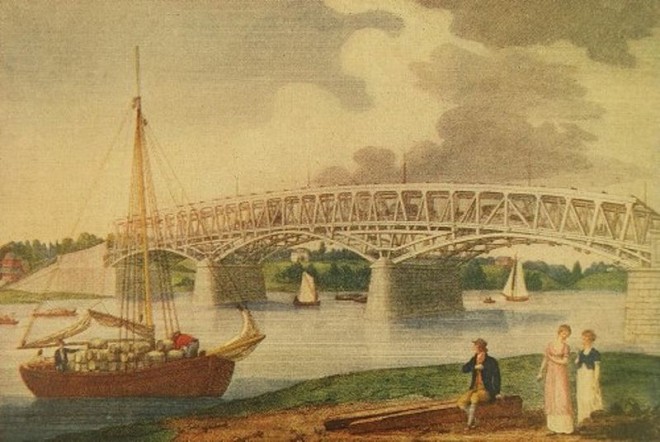 Thank god for William Birch. His early engraving of Philadelphia included this one from 1805 of the brand new Permanent Bridge at Market Street, before it became a covered bridge | via Wikipedia

The Permanent Bridge, the first major bridge across a river in America, carried Market Street across the Schuylkill River beginning in 1805. It was a massive source of pride for both Philadelphia and the fledgling United States of America. Considered an engineering marvel across the world, it spanned what was at that time considered an impossible distance (550 feet) and did it with stunning beauty.

Plans for a monument commemorating the completion of the bridge were already in motion during its five-year-long construction. Conceived and funded by the Philadelphia Society for Promoting Agriculture, this monument would not only provide a short history and statistical information about the Permanent Bridge, it would also act as a precise chronometer to aid the many travelers that would be passing through. 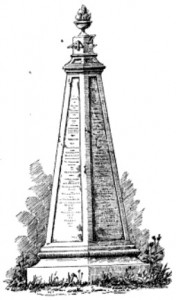 A conjectural drawing of the obelisk from 1884 |Source: Engineering News Record, Volume 12

Like the bridge, this Chronometrical Obelisk, as it was first known, was conceived with permanence and beauty in mind. It stood fifteen feet, eight inches and was constructed of white marble mounted upon a five foot square base of freestone. A sculptural bowl of fruit adorned the pinnacle of the monument. Directly below, a cubic part of the obelisk would provide temporal and geographic information prepared by the University of Pennsylvania’s Professor of Mathematics Robert Patterson: a sundial, an equation table to accompany it, an inscription of the monument’s latitude and longitude, and a compass indicating the four cardinal directions. The four sides of the obelisk from there to the base were inscribed with what has been described as a “mix of prose and verse” written by esteemed Scottish Poet and Philosopher James Beattie.

The long inscriptions give a succinct but thorough description of the bridge, indicating every material used, every possible measurement, and a precise construction timeline. The Eastern face of the monument is unique in that it gives no information but provides a poetic declaration of pride about how the bridge was completed entirely with private funding but for use by the public.

Though complete (sans some inscriptions) when the bridge opened on January 1, 1805, the monument would lay on its side on a city property yard on the west side of the Permanent Bridge, viewable by passersby. It would not be erected in its permanent position on the eastern side of the bridge until the end of that year, after the heavily-ornamented cover of the bridge was finished. It was placed on what is now the northeast corner of 23rd and Market, on gas company property. It was positioned to face the ordinal directions, making it appear off-center to the street grid.

Due to the soft nature of the marble used, the chronometric properties of the monument were rendered useless not long after it was erected. The inscriptions faded away soon thereafter. The monument did, however, outlast the “Permanent” Bridge (which itself lasted 4 decades longer than it was designed) and stood well after it was replaced.

By the late 1800s, this big stone obelisk stuck in a niche in the corner of the United Gas Improvement Company property (which by this point had grown large enough to nearly consume the monument with construction) was cracked, dirty, and completely illegible. Most Philadelphians had no idea what it was, where it came from, and what this grand obelisk was supposed to be commemorating. 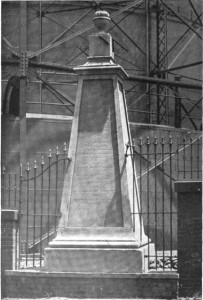 The monument in its last decade at its original location, 1894 | Source: Report of the Proceedings of the Numismatic and Antiquarian Society of Philadelphia

In 1894, the Numismatic and Antiquarian Society of Philadelphia took interest in the obelisk, now known as the Market Street Bridge Monument. They contacted the descendants of individuals involved in both the construction of the bridge and the erection of the monument hoping to get some financial assistance, but were met with no success. The Numismatic and Antiquarian Society then attempted to get the City’s help in the matter with the assistance of Councilman Charles Audenried. City Council discussed the matter in 1896 and decided to take no action in the restoration of the Market Street Bridge Monument.

In 1903, the construction of the Market Street subway’s western portal forced the monument to move aside. After it was complete, the monument was placed on a concrete peninsula directly above that portal at the northwest corner of 23rd and Market. This time, the monument’s placement was aligned with the street grid.

Over the next few decades, the Chronological Obelisk suffered even more wear and tear. Its placement lead to it getting damaged by automobile accidents. What remained of the bowl of fruit sculpture at the top was knocked off and remounted crookedly. The obelisk managed to grow dirtier and more featureless over the coming decades.

In 1953, plans to bury the Market Street Elevated from 23rd to 45th Streets were in full swing. The Market Street Bridge Monument was standing above a subway tunnel portal that would soon be destroyed. Howard Hipwell, Chief Engineer of the City’s Bureau of Engineering and Architecture contacted the Philadelphia Art Commission asking how to deal with the old monument when the time came for it to be moved. After inspecting the monument, the Art Commission deemed it too damaged to be restored and recommend that it be destroyed. The Commission asked the Engineer’s Club of Philadelphia if they wanted to created a bronze plaque as a replacement for the old monument, but the Engineer’s Club declined.

Such a plaque, after all, would be redundant. A plaque commemorating the Permanent Bridge has been mounted on the current Market Street Bridge since 1932 and was restored just a few years ago. 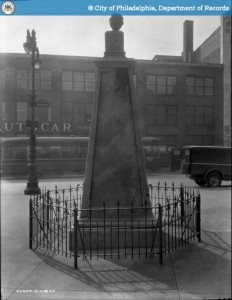 After that, the trail of the then 148-year-old Chronometrical Obelisk goes cold. Though William Burke, Director of the Philadelphia Art Commission tells Hidden City that they have no record of the monument’s final fate, it is likely that it was destroyed by the city contractors that buried the El.

The story of the Market Street Bridge Monument makes one wonder what kind of procedures the city has for destroying pieces of public art, especially one with historical value like this one. There is a defined procedure used by the city’s Office of Arts, Culture, and the Creative Economy for the removal of public art, which they call “deaccession”, and it was just updated in 2012.

There are eight possible conditions that can lead to a public art piece’s deaccessioning. If one or more of those conditions exist (the Chronometric Obelisk met three of these criteria when it was removed), the Public Art Division of the Office of Arts, Culture and the Creative Economy will begin a process leading to the presentation of that deaccession for approval by the Philadelphia Art Commission. If the Commission approves the deaccession, the Public Art Division will contact the artist (or his/her living descendants) and choose one of five possible fates for that public art piece, the final of which includes “Disposal by City policy and procedures.”

A recent example of the deaccessioning of a public art piece in Philadelphia is Reginald E. Beauchamp’s Penny Franklin, a bust of Ben Franklin made from 80,000 pennies that stood near the Engine #8 firehouse in Old City. It was removed due to extreme deterioration and safety concerns in 1996 and replaced by James Peniston’s Keys to the Community (a Franklin bust made of 1,000 bronze keys).

Margot Berg, Public Art Director of the City’s office of Arts, Culture and the Creative Economy, tells us that she is unaware of any currently-standing piece of public art in that city that is currently in danger of deaccession.

1953. The monument is in the center-left