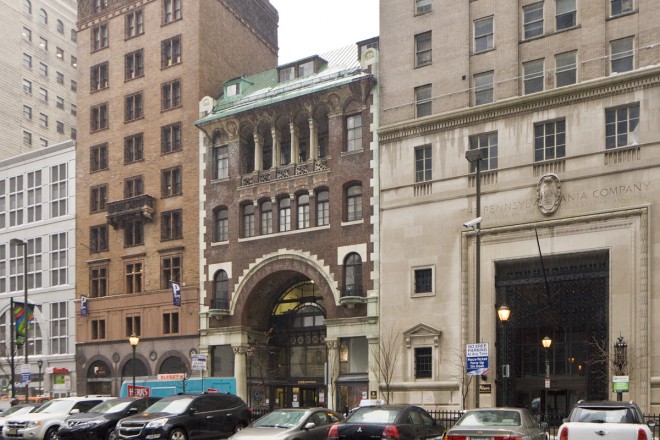 A row of Chestnut Street beauties. The Jacob Reed building is at center, flanked by the American Baptist Publication Society building at left and the Packard Building at right | Photo: Peter Woodall

A block away from the very center of Philadelphia, a small and understated sign is all the announcement CVS Pharmacy makes on the façade of a building resembling something from an entire ocean away. Its brick and concrete façade employs all the familiar building materials of Philadelphia architecture, but architect William L. Price composed them in an exterior more evocative of cities in Northern Italy than the city of the Italian Market. Nevertheless, the story of the building, née Jacob Reed’s Sons’ Store, is particularly Philadelphian.

Designed by and built for native Philadelphians as a carefully idiosyncratic addition to the city’s early 20th-century commercial context, the eccentric style and novel structural system of Jacob Reed’s Sons’ Store fashioned an architectural—and sartorial—response to the vast anonymity of Philadelphia’s newest department stores as custom-made as the store’s trademark menswear. 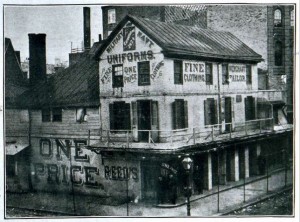 One of Jacob Reed’s Sons’ former locations, at 301 S. Front Street, now site of the Philadelphia Vietnam Veterans Memorial over I-95 | Photo via the Athenaeum of Philadelphia’s PAB project

With roots in Europe in the mid-19th century, the department store was exploding in popularity and scale in Philadelphia at the turn of the 20th century. Downtown Philadelphia had grown increasingly commercial, and department stores such as Lit Brothers and Wanamaker’s were expanding to capitalize on this shift. As they swelled from single storefronts to entire blocks, the department stores were based on the modern concept of an anonymous shopping experience. Where the 18th century’s small shops once fostered a culture of bargaining, haggling, and shopkeeper/shopper relationships, the department store had created and now promoted the idea of an inconspicuous, freeing experience in which one could browse without pressure to buy. To counteract this cultural change, and in contrast to the immense new buildings that both Lit Brothers and Wanamaker’s planned for just a few blocks away, Alan Reed (son of the men’s store’s eponymous Jacob Reed) hired architect William Lightfoot Price in 1903 to design a new building for the store’s site west of Broad Street.

From their former locations on Front Street, Second and Spruce Streets, and Chestnut Street, Jacob Reed’s Sons’ Store had served as clothiers to Philadelphia since 1824. Now, as the commercial center of the city shifted and spread west with the department stores, Alan Reed sought to reaffirm his family business’ traditions of individualized care and attention to detail by constructing a modern building that reflected the same values. Perhaps based on an earlier residential commission with him, Reed sought out the architect Price and his new business partner M. Hawley McLanahan. 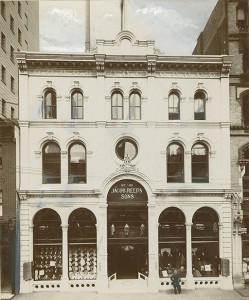 Prior to building their Italian palazzo, Jacob Reed’s Sons operated a location in this three-story building at 1424 Chestnut | Photo via Free Library of Philadelphia

A native of Philadelphia, Price was born in the city and attended the Quaker Westtown School. He took up architecture when he was hired by Addison Hutton, a skill set that grew to include a brief spell with Frank Furness in 1880 and a partnership with his brother Frank Price before teaming with McLanahan in 1903. Together with Alan Reed (who served on the board of the American Cement Company), Price shared an interest in the new structural possibilities of concrete, offering a lecture on the material just a few months before securing Reed’s commission for the new store. Price spent the last few decades of the 19th Century exploring popular styles, ranging from the Queen Anne to the English Tudor, but his stint in Furness’ office (as well as his other studies) had a significant effect on his designs. Influenced by Furness’ own architectural eccentricity, Price’s work often blended the expressiveness and craftsmanship of the English Arts and Crafts movement with the technological opportunities of modern concrete.

The design for the Jacob Reed’s Sons’ Store represented William Price’s architectural preoccupations as well as Alan Reed’s commercial intentions. Drawing on the urban palazzos of northern Italy, the building’s Italian Renaissance and Byzantine motifs invoked associations with tailoring and menswear. The four-story façade is dominated by Mediterranean-inspired details, including the fourth-floor loggia and the prominent two-story arched entryway at street level. These features, set into the dark brick façade framed by concrete columns, lintels, and quoins, underscore the contrast between the store and its urban and commercial context—even as it uses many of the same materials found elsewhere in brick-and-stone Philadelphia.

On both the exterior and interior, the store is ornamented with intricate mosaics and stonework. To highlight the store’s local roots and tradition of personalized service, the building incorporates several tiled vignettes from the studio of Henry Chapman Mercer, whose Moravian Pottery and Tile Works was established in Doylestown in 1897. Thus, as the customer entered the store through the arched portico, his approach was framed on the archway above by depictions of the clothes-making process, including the shearing, manufacturing, and weaving of wool. These mosaics are still intact today, despite the changes in tenants over the years. 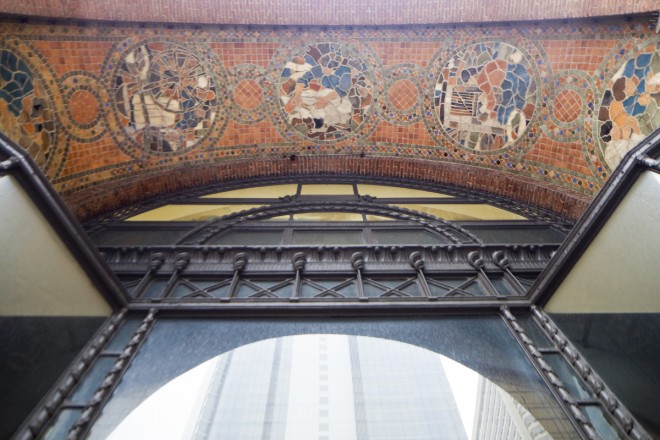 The massive entryway served as more than mere ornament, however. By carving out a recessed portico under the arch, William Price increased the store frontage available for the store’s display windows, while also linking the forms on the building’s exterior with the barrel vaults of the interior’s sales floor. This structural clarity offsets the otherwise-concealed novelty of the store’s design: reinforced concrete. As a result of Price’s interest and Reed’s investment, Jacob Reed’s Sons’ Store was among the first retailers in Philadelphia to adopt this modern technology, while still highlighting the business’ traditional approach to sales. 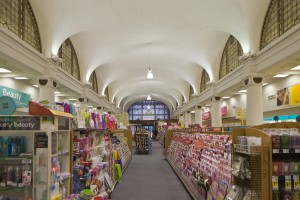 Trial size Beauty: Looking toward Chestnut Street from the back of the store | Photo: Peter Woodall

Once inside the store itself, the building draws on the plan and many of the features associated with ecclesiastical architecture. This was common in the new department stores, which celebrated consumerism in grand, vaulted spaces. (French author Emile Zola labeled Paris’ department stores “cathedrals of modernity”—a social commentary that was common at the time.) It is not surprising then that Jacob Reed’s Sons’ Store recalls the forms of early Christian and Byzantine churches, with concrete columns that separate the long barrel-vaulted sales floor from the side aisles. The interior’s space even draws on light from church-like clerestory windows—although they used modern backlighting (rather than natural lighting) to give the impression of a freestanding structure in the middle of the city.

At the time it was built in 1903, William L. Price’s design for Jacob Reed’s Sons’ Store served to pivot between centuries, architectural styles, and structural innovations in Philadelphia. The building still stands as somewhat of a curiosity on Chestnut Street, an elaborate building from a somewhat obscure architect and its namesake store closed in 1983. Having morphed into a Barnes & Noble for a time in the 1980s, it has been occupied by a CVS Pharmacy since the mid-1990s.

Though the brand is long gone, Jacob Reed’s Sons’ Store remains, however, an unmistakable challenge to Philadelphia’s department stores at the turn of the century, responding to anonymous sales experiences with personalized care, innovative materials, architectural detail, and local roots.