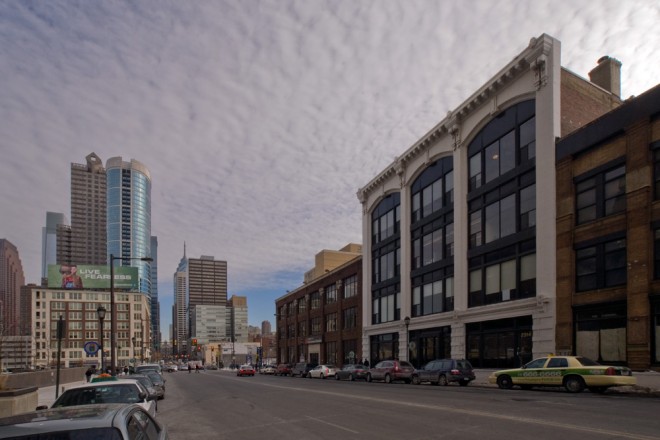 Live fearlessly: the Douredoures knew the difference between an adjective and an adverb when they built 2324 Market St. | Photo: Bradley Maule

In the early 20th Century, the rise of the automobile made a big impact on Philadelphia, most notably on the lower portions of North Broad Street, our city’s Automobile Row. However, some emerging car companies took a chance on another part of the city, creating a whole other automobile sales and manufacturing nexus, the eastern edge of the Schuylkill River on the western edge of Center City. Here we find some relics of that age, some exceedingly large like Guaranty Industrial Building (now Marketplace Design Center) and some small, like this one two doors down, the Douredoure Building.

Around the start of the 20th Century, brothers Atlee and Frederick Douredoure took control of the 2314-2330 Market Street, a row of flophouses that was awarded to their mother in a case tried by the Pennsylvania Supreme Court in 1869. The property was close to the site of the soap and candle factory that made their father a fortune in the early and mid 19th Century. In 1903, the brothers cleared 2324-2328 Market and built a small warehouse/office building which came into use by the Philadelphia branch of the Peerless Auto Manufacturing Company in 1907 (still standing, seen at far right in the photo above). The success of this speculative property lead them to propose a much larger, more sophisticated auto sales building for 2314-2322 Market, next door to the east.

At the time, a proposal for a convention hall that would straddle the Schuylkill River between Market and Chestnut was in the works and considered quite the sure thing. This new auto sales building would take advantage of the potential surplus of out-of-town customers that would flood the area. At the same time, the Bridgeport, CT-based Locomobile Company of America (locomotive + automobile, get it?) was unhappy with their Philadelphia branch office/sales building on Automobile Row at 245 North Broad Street (still standing but heavily altered) and jumped on the opportunity to get in on the new auto nexus on the east side of the Schuylkill. 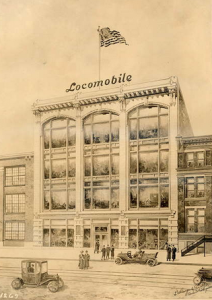 With Locomobile ready to move in, the Douredoure Brothers got the ball rolling on what was being called “the Douredoure Building” in early 1910. They commissioned Ballinger & Perrot, the same firm working on the new convention hall, for the design. The brothers didn’t account, however, for the interference of the lessees of their first building, the Peerless company. Part of their lease agreement was that a rear addition reaching Ludlow Street would be built to accommodate the growing concern. This clause and the constant requests from the Peerless company to get it done went ignored by the Douredoure Brothers. The Douredoure brothers then asked Peerless to cede 10 feet of their already crowded floor space along their eastern party wall to make room for the structural re-enforcement needed for the new Douredoure Building’s construction. Peerless delayed the brothers’ construction plans until they could cede their Philadelphia sales operations to the Quaker City Auto Company at their brand-new building at 145 North Broad to make enough space to live out the rest of their lease, leaving only offices and storage behind.

Construction on the new Douredoure Building by the Cramp Company began in January 1911 and was way more burdensome than the Peerless Company could have imagined. Not only were they massively inconvenienced by the construction, but much of their equipment and property was damaged in the process. Fed up, Peerless broke their lease and moved their offices to Norristown by that September, but not without trashing the place before they left. The new Douredoure Building, now being called the Locomobile Building, opened on the same day that Peerless vacated the building next door. The Douredoure Brothers sued Peerless a few months later and were awarded both the remaining rent on their lease and recompense for all the damage that they did before they left.

The new 41,000 square foot Locomobile Building was created as a compliment to the unbuilt convention hall (whose proposal died in March, 1911), sharing the same façade material (described as “light terra cotta”), with similar design elements. The frontage is 78 feet wide and the building reaches all 106 feet back to Ludlow Street. Due to the presence of the Market Street Bridge, the front of the building is four stories while the rear is five, making the front 45′ tall while and the rear is 57′. Knowing that the building would potentially be filled with cars, Ballinger & Perrott and the Cramp Company made certain it would be of the sturdiest possible construction. The 20-inch wide columns supporting the structure would be internally re-enforced with a steel and wire core. Each one sat on a 8-foot square, 30 inch deep footing. A huge skylight brightened the offices on the top floor and an electric sign declaring the presence of the Locomobile Company lit up the block at night. 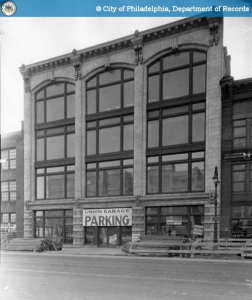 As Union Garage in 1931, right before the current Market Street Bridge was built | Source: PhillyHistory.org

The Locomobile Company’s new location stayed successful until 1922, when the company was purchased by Durant Motors of Grand Rapids, Michigan. The building then became a parking garage simply known as Union Garage, with its entrance on Ludlow Street. During the Prohibition, illegal liquor was stored in the garage until busted by the State Controller’s Office in 1926. In 1932, the 2300 block was made inaccessible by the construction of the current Market Street Bridge. Shortly after it was complete, the General Electric Company purchased the building and used it for storage and some offices.

In 1946, the building was then purchased by Hastings & Company, who had been manufacturing gold leaf in Philadelphia since 1820. They moved into the building, which had been vacant for a few years, from the 800 block of Filbert Street and started doing interior alterations almost immediately. Gold leaf was produced and sold here until the end of the 1960s. At the start of the 1970s, the building’s current owner, the F.C. Haab Oil Company, purchased the building and made it their headquarters. They still operate there to this day, leasing extra space to other companies.

Today, the Douredoure/Locomobile/Hastings/Haab Building appears much the same as the day it opened in September 1911, sans the huge “Locomobile” sign on top. The 2300 block of Market still sports its buildings from the Douredoure era, all juxtaposed against the 1970s-chic PECO Building across the street.