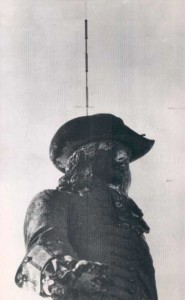 Philadelphia has had an unusual relationship with the development and use of radio antennae. The great Quaker founder of both Philadelphia and Pennsylvania might know all about this…

First of all, Elihu Thomson and Edwin J. Houston—science teachers at Philadelphia’s Central High School at Broad and Spring Garden Streets—were early pioneers in the science of wireless telegraphy (radio waves). In 1875, they became the first to demonstrate the principles of radio communication, while at Central High. Thomson was demonstrating the operation of an electrical spark gap generator during a routine physics lecture. In the school observatory about a hundred feet away and a floor above, Houston observed a small blue spark jump from the surface of a brass doorknob to the tip of a metal pointer he held in his hand while opening a door. This was perhaps the first recorded occurrence of electromagnetic energy transmitted through free space. Houston’s doorknob went down in history as what might have been the first antenna known to mankind. (Thomson and Houston founded an electric company that would later merge with Edison’s to become General Electric.)

Then in 1907, the Wanamaker building was the first store in the world to have a radio, with its antenna mast on the building’s roof. Beginning on May 22, 1911, customers could use this wireless set to exchange Marconigrams (Marconi radio messages) with ships in the Atlantic Ocean. The following year, Wanamaker’s received news of the sinking of the Titanic via its radio.

But perhaps the most remarkable (and hurtful) antenna-related story in Philadelphia must be that of the aerials protruding from the statue of William Penn atop the tower of City Hall. For a good part of the 20th Century, the Penn statue was topped with at least one communication antenna. 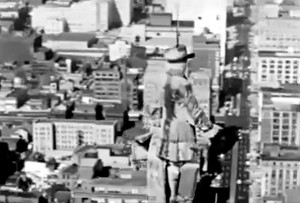 Interestingly, in 1906, twelve years following the Penn statue’s emplacement on City Hall Tower, the city of Philadelphia instituted an ingenious public service to help keep an accurate timepiece, which was difficult in the days before radio communication was common. Arc lamps surrounding the tower were turned off three minutes before 9 pm and then re-lit exactly at 9 o’clock, thus broadcasting the correct time once daily to points as far as thirty miles distant. (Other accounts report that the giant clock face lights were used for this purpose.)

This tradition ceased in the 1930s, shortly before the first reference to an aerial on or around the Penn statue emerged. In 1939, WCAU Broadcasting, then starting its fledgling television station, wanted to place a short television antenna on the crown of the hat of the William Penn figure.  Fortunately, this plan was not carried out—Channel 10 soon began using an antenna atop the PSFS Building to transmit its signal.  Perhaps a few civic-minded Philadelphians intervened and showed some respect for Penn. 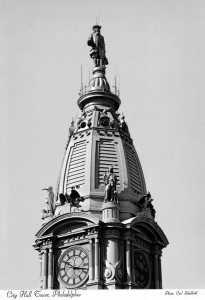 Postcard view of the Penn statue, surrounded by antennae | Photo by Carl Scholfield

By 1947, however, Bell Telephone newsletters around the nation gleefully related that “The statue of William Penn atop City Hall in Philadelphia received a ‘feather’ for its hat recently through the courtesy of the Police Department.” Four double antennas—all part of the city’s new police radiotelephone (duplex radio) system—were placed around the Penn statue and one seven-foot long antenna was mounted on William Penn’s hat. The set up made City Hall Tower a major communications station. Some three hundred police cars were also equipped with two-way radio telephones enabling them respond quickly to emergencies around the city.

A story in the April 1962 issue of Popular Science mentions, rather callously, that “‘hat pins’ that served as antennas for the [city’s] central area were inserted in the bronze head of the Founding Father.” The culprit/vandal was probably one F. J. Atkinson, an expert in aerial mast installation, who testified in a 1954 court case that he had erected the antenna on top of Penn’s hat.

Despite Philadelphia having the honor of hosting the world’s tallest all-masonry-load bearing structure capped by the tallest sculpture on top of any building in the world, it was not considered a problem to debase this superlative of Philadelphia by mounting an antenna on William Penn. City Hall Tower and the world-famous Penn statue were together relegated to being an antenna stand. Furthermore, an aerial—not Penn’s hat—became the highest thing in Philadelphia for a time. 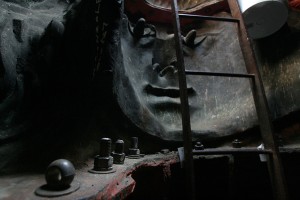 Get inside Billy’s head: the passage through the Penn statue was once used to mount antennae | Photo: Bradley Maule

What an ignoble thing to happen to this celebrated representation of William Penn. Drilling holes into the Penn statue’s head? Piercing the pate of the visionary Founder? The work’s creator, Alexander Milne Calder, would be appalled, as would countless Philadelphians who grew under Penn’s watchful eye. (The statue, incidentally, is hollow; a narrow access passage through the figure leads to a hatch at the top of the hat.)

The 1940s-era rod antennae atop and encircling the Penn statue were probably removed in the early 1960s, when four microwave dishes were installed at the base of the Penn statue. (Supposedly, the holes were patched with tar; later, bronze plugs filled the openings.) These dishes beamed signals to regional police headquarters for conversion to police car frequencies. Said one article: “The effect is that of a spiderweb of communications over the whole of Philadelphia.” 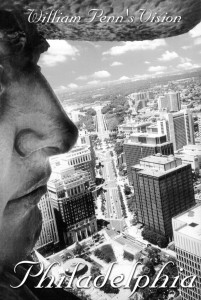 This striking postcard photograph highlights the face of the William Penn statue with the Ben Franklin Parkway receding towards the northwest. Compliments and kudos to the photographer, Marc A. Umile, who took a risk hanging from the brim of the statue’s hat to get this shot.

Still, more drilling into Penn’s head was apparently required for this installation. A 1961 piece in Electronic Age describes how this bit of brain surgery was done: “The power drill [operator] bent to his work. If it was a hole in the head they wanted, he was equal to the task. The bit whirred, and in seconds it had burrowed neatly into the head of William Penn’s statue.”

The 1961 article then went on, smugly declaring that “Instead of just standing there, as he has for generations, Billy was doing something.” Perhaps this reflects the populace’s general sentiment about the Penn statue and all it stood for in that era. The writer missed the whole point as to why the Penn statue was “just standing there,” just as when “gentleman’s agreement”—regarding not building any towers higher than the statue—was broken a quarter century later.

The microwave dishes were moved to another spot in 1989, but other antennae have been added to City Hall Tower through the years and the structure remains a communications station (with most antennae on the inside). As far as commercial antennae are concerned, most of Philadelphia’s major television and FM radio transmission towers have been located in Roxborough for years.  (There are a dozen or so masts, several exceeding 1000 feet tall, within a half-mile of each other at what is collectively called the Roxborough Tower Farm.)

Meanwhile, the Penn statue is no longer the tallest thing in Philadelphia. But at least William Penn doesn’t have any silly aerials protruding from his head. High atop his 548-foot perch, he can survey his “Greene Countrie Towne” of Philadelphia in relative peace—except for the sounds of police and fire vehicles wafting up from below.