Philadelphia’s soon-to-be new tallest tower is settling in to all the usual places. The Comcast Innovation & Technology Center (CITC) already has a Wikipedia page and a Skyscraperpage discussion, six pages and counting. Inga Saffron has already reviewed it. Liz Spikol’s devoted half of this week’s Property content to it. A couple clicks over on Philly Mag, Dan McQuade has issued a proper annotated guide. Even old Philly Skyline has relaunched with a truly new Philly Skyline.

The biggest news in the 2014 local building world, unsurprisingly, involves the biggest media company in the whole world. With 48 hours to let it sink in, I have to think it’s about as Philly a building as we could get: it’s full of conflict. Its design comes from Norman Foster, at the top of the top tier of architects, but it’s not his best work. It’s very good, but it’s not the Gherkin. It shows a loyal, hometown commitment from Comcast–one of the most unpopular companies in the world, especially after the net neutrality ruling earlier this week. It’ll be the tallest building in the city–thanks to a technicality. The 125’ blade–the functional spire topping the building’s core removed to the western side–sits atop a pedestal that itself is on top of the building’s roof, which is shorter than Comcast Center’s roof.

But make no mistake, in spite of such quintessential Philadelphian conflict, the Comcast Innovation & Technology Center is an incredible project that will have eyes on it from around the globe. As Inga mentioned, California’s sprawling monsters of tech, Google in Mountain View and Apple in Cupertino, will use CITC as a litmus test against their own model. Sure, you’re working for Google and Apple, but you’re working in Mountain View and Cupertino, not San Francisco, where Cesar Pelli’s Transbay Tower (currently under construction) will give the City by the Bay its very own supertall.

With CITC, workers will come directly upstairs from a train station that serves every regional rail line and is a five minute walk to the subway, the el, and every trolley line. And where they’ll ascend to is a whole other thing: spacious ‘lofts’ whose arrangement is The Thing. 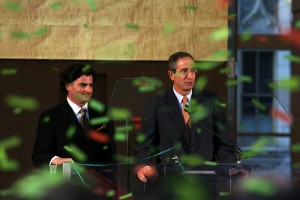 Liberty Property Trust’s Senior Vice President & Urban Regional Director John Gattuso, a 25-year veteran of the Philadelphia development community who’s had a hand in so much of what Liberty has built from Malvern to Comcast Center to the Navy Yard, sat down with me on Wednesday to talk about the process that’s brought us to the Comcast Innovation & Technology Center.

“This process started in August 2011,” Gattuso says, alluding to the purchase of the parcel then owned by Walnut Street Associates, who had proposed American Commerce Center. “The conversation with Comcast started in earnest in fall 2012, and we were initially thinking in terms of phase 2,” the shorter building initially planned as Two Pennsylvania Plaza on the northeast corner of 18th & JFK. But they realized early on that the programming wouldn’t fit the site.

At that stage, Gattuso and Comcast Chairman and CEO Brian Roberts led an RFP for a range of architects–established and up-and-coming, local and international. That coalesced into a group of five firms—which included Robert A.M. Stern Architects (already a client both at the first Comcast Center and at the Navy Yard) (New York), Foster + Partners (London), Renzo Piano Building Workshop (Genoa), and Bjarke Ingels Group (Copenhagen), and Atelier Jean Nouvel (Paris)—to transform the surface parking lot at 18th & Arch into the 21st Century facility representative of a company that both produces and provides content. “This was a compensated design competition,” Gattuso clarifies, “and we stayed in active conversation with each throughout the process.”

After selecting Foster in June, Gattuso, Roberts, and Comcast Vice President of Administration Karen Buchholz began weekly meetings, often directly with Foster, to craft an invigorating workspace. “We asked ourselves, ‘what is office space today?’” Gattuso explains. “Office space used to announce status within a company, or where and how you controlled your workers; now, it’s got to be somewhere people want to work, like Glaxo for example, a place people choose to go to.” The offices Liberty built for pharmaceutical giant GlaxoSmithKline, designed by Stern, opened last year and achieved a Double LEED Platinum certification.

In factoring how to do that—how to design a place people want to come to work—Gattuso says technology dictated the conversation. “In this building, we’re making technology. You don’t end up driving it, or putting it in your pocket—in its essence, it establishes connections, so the building’s floors are open for those connections, for interaction.”

How much of this open space was required? “We had a certain amount of office space in mind, and we knew we also wanted a hotel,” Gattuso says. “Once that’s determined, then you can think of how it looks on the skyline, how it relates to Comcast Center. To that end, this building has been extremely deliberate in its thought process.”

Though there are clear differences between the first and second Comcast towers, they too have a connection, an interaction that feeds the other. “The new building has a different approach than the first one, but each one enhances the other,” Gattuso says. “Comcast Center is classical in its axial planning, but with a modern, glass skin. If it’s guilty of anything, it’s its emphasis on elegance. [CITC] is on an axis too, with Arch Street Presbyterian Church and Comcast Center, but it expresses itself in a more robust way. This building tells you how it’s built, with a textured skin.”

“This is a vigorous, sophisticated building,” Gattuso ultimately explains. “That’s because it’s Lord Foster himself; in it, you can see elements of Swiss Re (in London), of [the] HSBC Building (in Hong Kong).” Likewise, Inga points out CITC’s similarity to Foster’s still-unbuilt Three World Trade Center in New York, and my own first impression likened its appearance to Foster’s Commerzbank tower in Frankfurt. 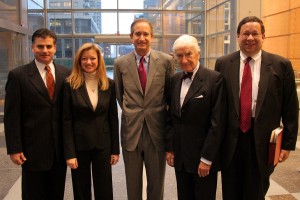 Considering the first Comcast Center took the better part of a decade to come to fruition, and with the advancement of technology in the same 10-15 years since the first conversation began, surely it’s interesting to see how the development process itself has evolved since the Stern collaboration. “The only difference in that regard is a new drummer [in Foster],” Gattuso says. “The band is still the same. This team has traveled a road since starting [Comcast Center], and as you’d expect, communication is vital,” Gattuso describes of Liberty’s ongoing relationship with the communications giant.

“You don’t always have to agree, but you need to establish trust. Because we have trust, we can take risks; we can create a platform to push the envelope and build something great.”

Upon its completion, the developer, architect, and tenant hope to achieve a LEED Platinum certification with the Comcast Innovation & Technology Center. Comcast Center received a Gold certification in 2009.