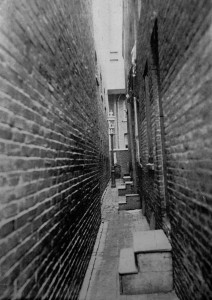 Editor’s Note: This is the first of a two-part series on pedestrian streets. This one focuses on ‘old world’ footways–the alleys and courts of pre-Civil War Philadelphia. The second, to come later, will focus on the later, planned ‘city beautiful’ pedestrian thoroughfares.

Long before the taming of wild animals and the spinning of wheels, the bipedal creature was simply a pedestrian, creating familiar paths to mark their way. And even after, when animals drew vehicles, transportation was expensive and limited. This fact, coupled with the need for dense populations to support commerce and industry, led to the old world urban density of attached buildings and terraced façades, arranged for walkability.

The inhabitants of these dense metropolises lived a pedestrian lifestyle. This environment intensified in London during the Industrial Revolution. And when they laid out Philadelphia, a more organized variant of London was created as an improved pedestrian city—a city with pedestrian homes, in pedestrian streets. 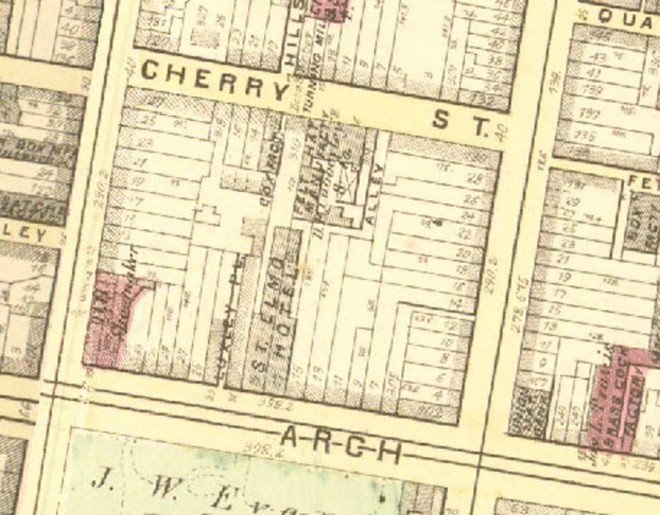 But before we dwell upon the pedestrian, let us first talk about streets in general. Philadelphia thoroughfares are used as “cartways” and/or “footways”. Both can be publicly and privately owned, maintained. Cartways provide for vehicles (automotive or animal drawn). Footways provide for pedestrians (walking or pushing or pulling conveyances). Cartways are almost always coupled with footways with rare exception, but there are many footways closed to vehicles. Commonly these footways are privately owned and almost always privately paved and maintained, bringing to mind the categories of pavements associated with individual buildings in all parts of town. (I.e., the sidewalk pavements vary per building.) And while many alleys, courts, and small streets are named, they may never have been “opened,” and even a name does not signify public ownership or even right-of-way.

“It is the opinion of the Department of Streets that such minor streets, alleys and courts are not open to use by the general public but were created to serve as a means of ingress and egress for the abutting property owners,” said June Cantor, a Public Relations Specialist with the Streets Department via email. “These minor streets are not plotted on the official City Plan, and there is no known record of their having been opened for public use.”

Yet a definite consciousness, and even priority, for the pedestrian prevails in almost every department of city government. For example, in the 2012 Philadelphia Complete Streets Design, prepared by the Mayor’s Office of Transportation and Utilities, one of the most pedestrian of public streets is categorized in “Shared/Pedestrian Priority Streets.” Also known as shared streets, these narrow thoroughfares prioritize the pedestrian, but make way for low speed vehicles, representing small streets like Elfreth’s Alley.

Originally spacious, verdurous blocks set within streets of ample width, Penn’s Philadelphia evolved immediately into an 18th Century urban fact of commerce and trade, single family houses galore. Narrow streets and even narrower alleys filled in the Philadelphia grid as its second or third subdivisions, creating an urban setting Penn never imaged, which we live with today. Yet this dense matrix is not only façade deep. A most London trait, “block-specific by block-specific” systems of pedestrian courts accessed by pedestrian alleys are as old and widespread as the city’s 18th and 19th Century development.

“I thought Philadelphia had no bad conditions; that it was a city of homes. Yet the intricate network of courts and alleys with which the interior of the blocks are covered is a conspicuous feature.” —Emily W. Dinwiddie, Housing Conditions in Philadelphia. Philadelphia, 1904.

Uncommon in the context of American cities, yet typical of Philadelphia, courts are made up of open space enclosed wholly or partially by buildings. Or, as stated above, courts are the interior space within a block, often divided into densely developed lots. The most known and visited today, Franklin Court, is perhaps the most uncommon, representing the court in its grandest form with a detached house at the center. Franklin Court also always provided for a cartway even when its grandeur was lost to dense residential development in the early nineteenth century. Another example is the placement of Carpenter’s Hall at the center of the block, in a court, with cartway access. 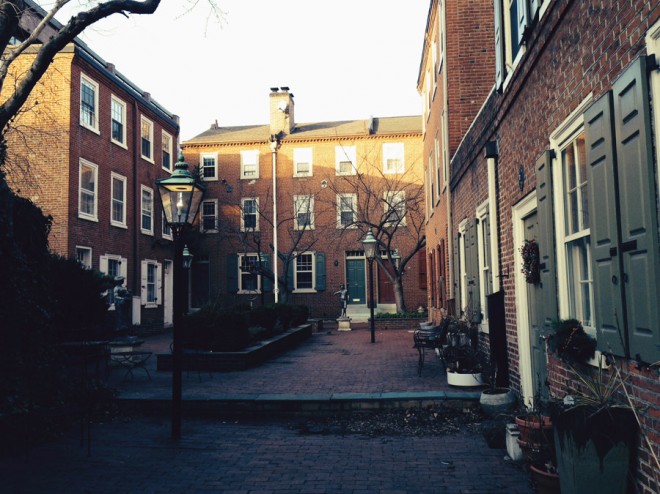 Residential courts were the most common use for interior space within a city block of row buildings. They were also the most pedestrian characteristic of Philadelphia. Such court space was crammed with small attached urban dwellings, accessed by narrow sidewalk-like alleys to the center of the block and/or in densely built inlets adjacent to small streets and alleys. These courts varied in layout and size, but almost always provided for residential quarters, many of which today are fashionable as unique dwelling sites.

In a passage running from Arch to Cherry streets, Philadelphians still make their homes in Loxley’s Court, an irregular space at the center of the block comprised of two- and three-story brick row houses surrounding a brick paved open space. Always accessed by pedestrian alleys, this court was originally developed in 1741 by Benjamin Loxley and it remained within that family until 1901. While Loxley’s Court is noted in tourist guides, it is less commonly known than quaint old Bladen’s Court, extending north from Elfreth’s Alley, featuring its period common well, cobble stones, and the smallest of court dwellings. 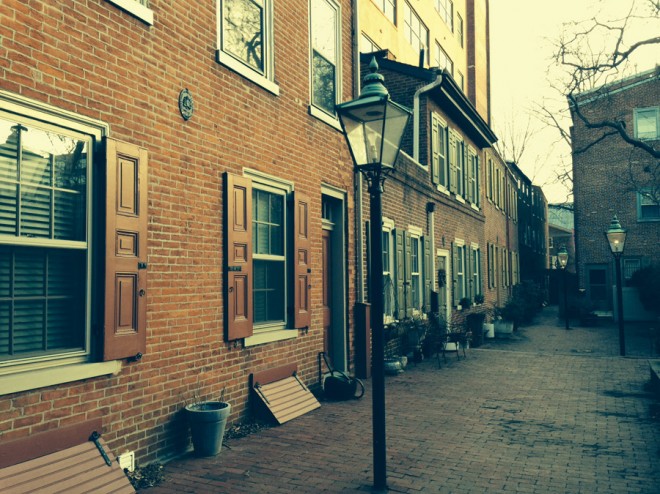 While Loxley’s and Bladen’s are both in Old City, the development of courts in Center City extended west of Broad Street, lingering as a form of development even after the Civil War. For example, much farther west than expected, a small residential court inlet once extended south off Lombard Street between Sixteenth and Seventeenth Streets. 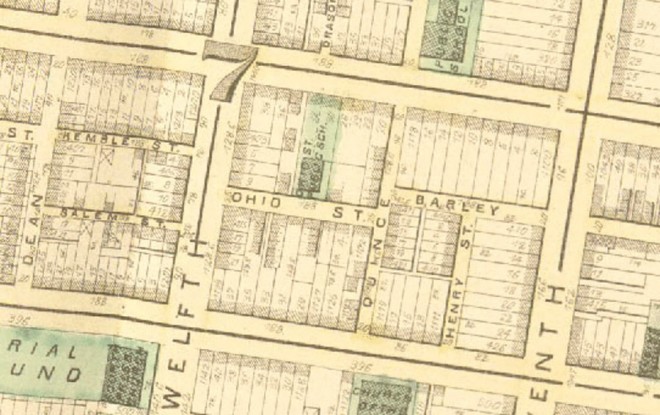 This 1875 Hopkins Atlas shows the 1100 block between Lombard and Pine Streets with Ohio Street (now Waverly) and its courts. The map also illustrates the density of the blocks in the area | G.M. Hopkins’ Philadelphia Atlas, 1875.

In the 1000, 1100, and 1200 blocks between Lombard and Pine Streets, one finds a concentration of pedestrian alleys and courts. With John Dorsey’s wood frame dwelling going up as early as 1810, the 1100 block eventually contained four small alleys including Ohio Street (now Waverly). By the mid-19th Century, four separate residential courts of brick trinity-style row houses extended south from the westerly half of Waverly Street. Another unusual court of three pairs of trinities extended north from Waverly thru to Pine Street. All but one of these courts has been taken down. 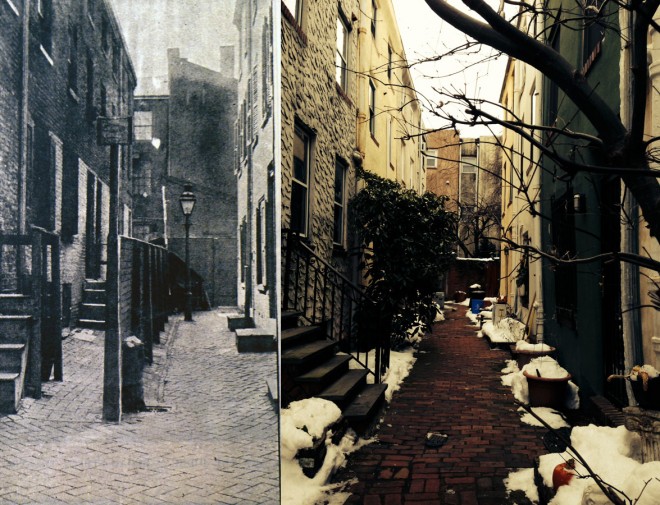 On left, circa 1905, Hazel Avenue (also Bell’s Court) (Housing Conditions in Philadelphia, Emily W. Dinwiddie, Philadelphia, 1904).
On right, the same court today (Photo: Oscar Beisert). Note: the relationship can be understood by the number of buildings; the entrance heights; and various documentary evidence.

Entering Waverly from South Twelfth Street, there is an immediate inlet on the right, in which survives a small court of nine trinities, still occupied. Once known as Bell’s Court (not to be confused with Bell’s Court in Old City), later as Hazel Avenue, the court is composed of five houses at the east and four houses at the west, centered on a wide footway that was originally divided by a wood fence at its center. The fence is long gone, the brick façades parged over, but the form and buildings of the court remain.

Beyond the traditional north and south boundaries of Philadelphia, similar, less cliché courts are still occupied in Fishtown and Northern Liberties, many of which have been documented by Fishtown resident Roman Blazic. South Philadelphia has similarly occupied residential courts. 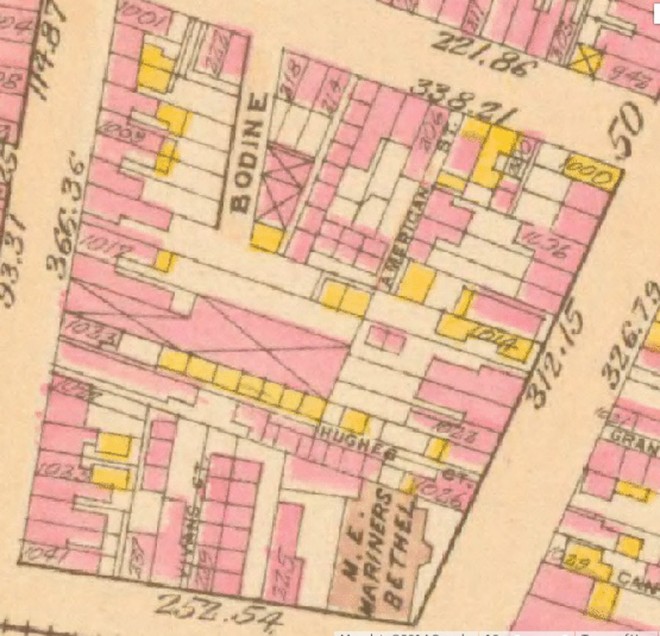 This 1895 Bromley Atlas shows the configuration of the 200 block between Carpenter Street and Washington Avenue with at least four of its early residential courts. Note: the site illustrated below is at the top of the image between Bodine and American Streets
| G.W. Bromley and Co. Atlas of the City of Philadelphia, 1895.

The 200 block between Carpenter Street and Washington Avenue is expansive. Historically, this block featured at least four residential courts, including Vivan’s Court bounded by twelve houses in a footway north of Washington Avenue and Hugh’s Court bounded by at least fifteen houses accessible from Second Street at the east and Third Street at the west via footways. Both were razed long ago. 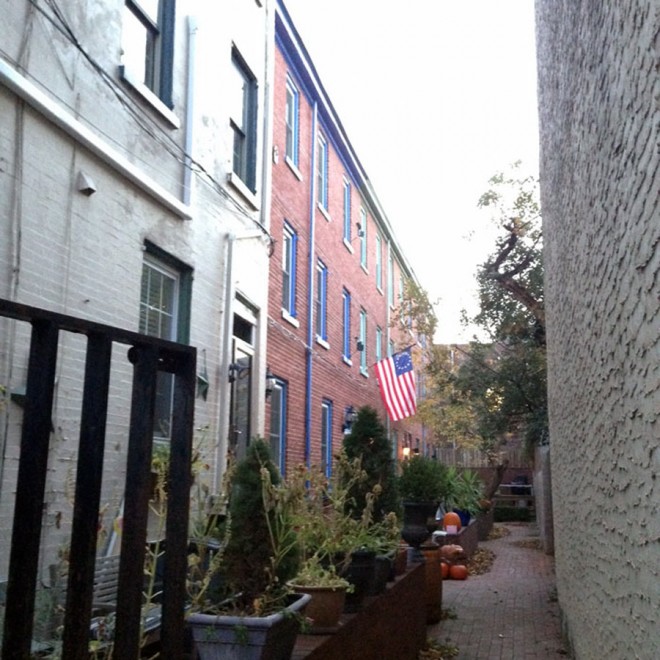 Looking south from Carpenter Street, the footway leads to this court of eight dwellings that have almost all maintained their brick façades | Photo: Oscar Beisert

However, at the northern end of the of the block, between narrow cartways, S. Bodine Street at the west and S. American Street at the east, a court bound by nine brick trinity-style row houses extends south on a footway from Carpenter Street, still intact. Adjacent at the back wall of the two southernmost trinities with egress at S. American Street is a cluster of six two-story brick houses. Two face east with access at S. American; two face north and two south with separate footway access from S. American. The names of these courts are not known, but the extant grouping illustrates the former configuration and density of the entire block. 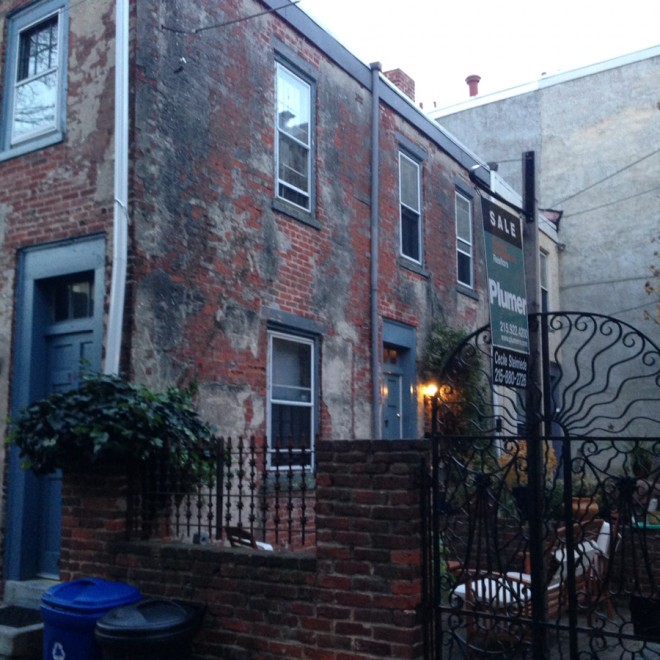 Looking west from American Street, two houses are accessed through American; and two from the footway on right. The parged wall in the background is the rear wall of the court of eight houses extending from Carpenter Street. The other three houses in this cluster of six are mirror image farther to the left (not pictured) | Photo: Oscar Beisert

Historically, these houses were constructed for craftsmen and working people. Eventually, the more prosperous of these moved on and the new inhabitants of courts were generally poorer. And it was in these pedestrian streets that the slums of Philadelphia were hidden within the block interiors of a city with “no bad conditions.”

Also within the context of early development in Philadelphia were pedestrian alleys not related to courts or pedestrian dwellings. Rather, these alleys provided secondary and/or service related access. This type of pedestrian street also maintains many forms and is also as old and comprehensive as court development. 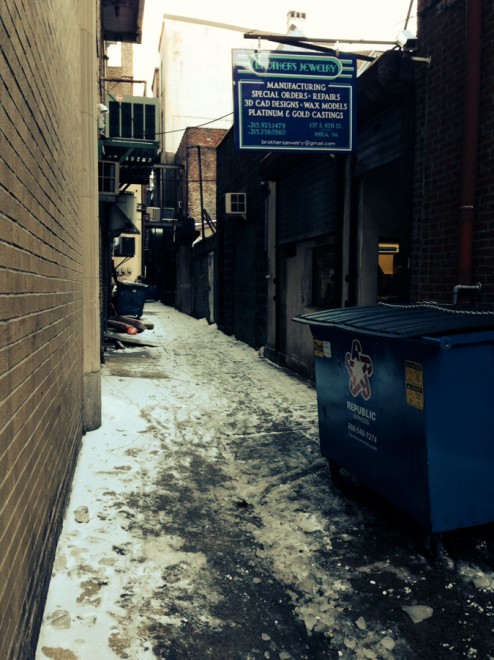 Looking east in the rear pedestrian service alley of the buildings in the 700 block of Walnut and Sansom Streets. Brothers Jewelry has maintained a storefront in this alley for over thirty years | Photo: Oscar Beisert

Originally prime residential, now commercial, one of the more intense and seemingly public examples of a pedestrian alley bisects the 700 block between Walnut and Sansom Streets. The former dwellings have primary egress facing south on Washington Square and north on Jeweler’s Row. At first glance, this footway is a service alley from one end to the other. Upon closer inspection, one finds a shop front at the west end. Facing north, Brothers Jewelry has no physical address to speak of—using Walnut Street, Rear historically and 137 S. Eighth Street today. After thirty plus years of business with his brother, Mikail Degirmenci did not have a clear picture of who maintained the pavements, much less who owned the alley itself. Nevertheless the old world Turkish jeweler seemed quick to understand the certain fasciation associated with their location. 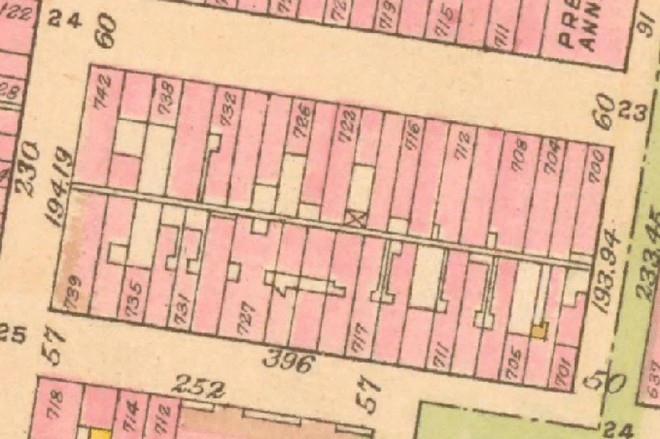 This 1910 Bromley Atlas shows the 700 block between Walnut and Sansom, clearly illustrating the pedestrian alley in the rear of the buildings. | G.W. Bromley and Co. Atlas of the City of Philadelphia, 1910

June Cantor, Streets Department, provided information about these alleys as well: “These are not city property and not public right of ways and are the responsibility of the abutting owners.” However, even in a city as bureaucratic as Philadelphia, there are always exceptions.

Half laughing, half serious, Degirmenci said, “[the alley] has no name. Oh I see what you’re getting at, like in Europe or something, no.” And while Brothers’ placement on a pedestrian alley is unusual, it is not unknown in a pedestrian city—in Philadelphia.