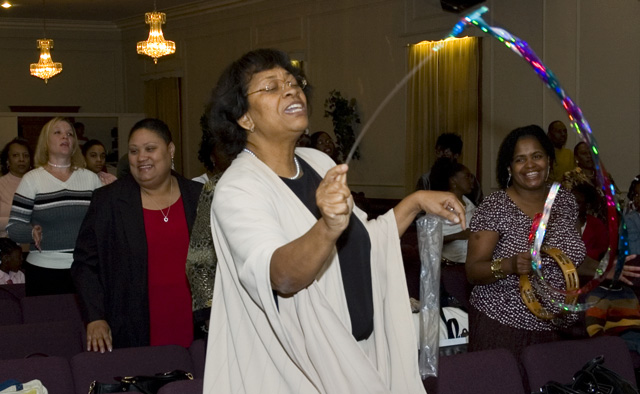 We often forget that in cities, flux is the reigning constant. Individual properties, blocks, neighborhoods, and cities change over time, reflecting the confluence of forces constantly at work. This is especially evident in houses of worship, buildings so frequently at the center of preservation—of aging buildings, of the congregations themselves. Katie Day, an instructor at The Lutheran Theological Seminary at Philadelphia, celebrates flux in Faith on the Avenue: Religion on a City Street, published by Oxford University Press this month.

In Faith on the Avenue, the culmination of a five-year study of Germantown Avenue congregations, Day explores the relationship of institution to urban context, from Kensington to Chestnut Hill.

Because more than half of Germantown Avenue’s 85+ congregations are housed in commercial buildings–in former storefronts, banks, and warehouses–Day explores the notion of congregations as accidental preservationists. 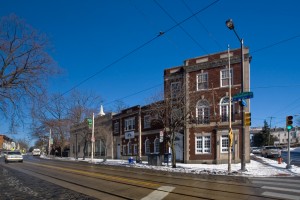 Rachel Hildebrandt: Why did you choose to study the congregations along Germantown Avenue instead of another street or area?

Katie Day: There are several reasons… It started quite informally. I wanted to do an orientation for incoming students back in 2004, so I had them read Elijah Anderson’s Code of the Street. In the book, Anderson talks about social codes on the Avenue, but just glosses over the fact that there so many congregations. Since I’m trying to orient seminarians to the place that they’ll be studying, I grabbed a friend of mine who’s a photographer and took a bunch of photos of the Avenue–of the diversity, the wild diversity of congregations and neighborhoods. When I showed the students, I thought ‘This is really unique, this is really important.’ I then tweaked [the slideshow], expanded it, and ended up showing it at a presentation for the American Sociological Association that year.

Not only did I have a personal connection Germantown Avenue, it’s unique in that it bears the history of the city and in many ways, the country. It does this in ways no other streets do…  And it’s a social laboratory. On Germantown Avenue, social inequality is not an abstraction. You only have to take the 23 bus or walk the Avenue to see economic disparity.

RH: Why do congregations occupy so many former commercial spaces along Germantown Avenue?

KD: When there’s an economic downturn, commercial spaces become very affordable. And when commercial strips experience economic downturn, multiple properties become available as small businesses close. Then congregations move in, creating concentrations of smaller congregations or what we call, ‘religious districts.’ For example, there’s a district in the few blocks between Lehigh and Glenwood in the Fairhill section. When I started the study, there were 15 congregations. I think there are 13 now. 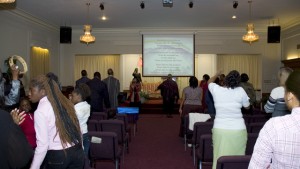 What was once the home of the first funeral home in America has found life again as Brand New Life Christian Center | Photo: Edd Conboy

KD: This is exactly what I talk about in the second chapter. Basically, sacred space is a social construction. When I talk about sacred space, I’m talking about space in which we transcend our individual lives and preoccupations to tap into something larger. It’s what people do that imbues meaning.

Commonly, congregations construct a cross out of glass brick in the doorway or window. But that doesn’t make it sacred–what makes it sacred is that when people enter the space, they take on a reverence for it that is different from the reverence they would have if it were still a liquor store or a blood bank or a shoe store. It’s treated differently because it enables them to gain access to God. It is there that they meet God. It’s holy ground.

RH: How does a congregation make a former commercial building its own?

KD: Here’s an example: In Chapter 2, I talk about congregations across the street from each other who are very different. One took over the first funeral home in America, on the corner of Germantown and Washington (Lane). They’re Jamaican and Pentecostal, so they brought their own cultural understanding of death and spirits. After moving in, they performed a spiritual cleansing. And before every service, ‘prayer warriors’ pray over chairs in order to banish any evil spirits that may be lingering. You’d think that they would have taken a sledgehammer to the interior, but they preserved the embalming room, the hand-operated elevator that transported the caskets up and down, and the marble-lined space where wakes were held. They’ve respected the building as they’ve repurposed it.

Across the street, the Mennonites acquired a building that was a social club and then an ironworks retailer. I used to get my fireplace irons there. It was very dirty and dusty. They moved in, and part of what made it sacred for them, is the sweat equity they put into it. They did all the renovation themselves. It was a labor of love as they transitioned the building from retail space into worship space. That’s what makes it sacred for them. They pulled together and created new meaning. 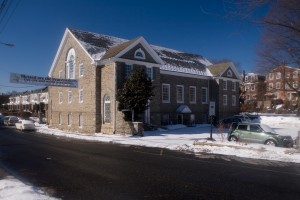 KD: Absolutely. I tried to argue that these congregations don’t just take over buildings that don’t mean anything to them. They take care of these buildings. Hermit crabs take on these huge old Gothic church buildings and put a lot of love and care into them. One of the churches, Second Baptist, had the sanctuary floor collapse two summers ago. They inherit or acquire these buildings–these are high maintenance buildings, they’re not young buildings–and oftentimes, the congregations aren’t aware of how much is required… At Second Baptist, when the floor collapsed, I thought, ‘That’s it. This little congregation is not going to be able to sustain its building.’ But they pulled together to make the renovations necessary, and were back in business within six months.

For those that have recycled commercial buildings, I found that there’s a lot of care and pride. They love to tell the story of the building. I would go into a church and they’d say, ‘This used to be a shoe store. Let me show you the back, where you can still see how the shoes were stacked.’ They enjoy the backstory. They’re not trying to erase the former usage.

At the very least, I hope the book inspires people to be interested in congregations. I’m really writing to the policy makers, planners, and academics who overlook communities of faith, particularly smaller storefront congregations. They’re relevant to community life and local economies, and they do amazing, amazing ministry. They do health care, education, food. I’m always surprised at how invisible communities of faith are to people who make decisions about space use.