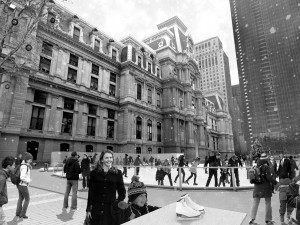 The new Dilworth Plaza, courtesy of the Center City District.

The planned ice skating rink for the revamped Dilworth Plaza brought to mind the long history of ice skating in this city. Indeed, Philadelphia was the early center of skating in America, possibly because Quaker leaders approved of this ostensibly frivolous activity.

Philadelphia’s skating tradition begins with the Philadelphia Skating Club & Humane Society, which today is the oldest and largest skating club in the country. Its predecessor organization was the Humane Society of Philadelphia, a group organized in 1770 to perform rescue work now done by modern police forces. (These organizations are not to be confused with the modern Humane Society, the nonprofit whose goal is to end animal cruelty.) The outfit incorporated on January 23, 1793, and was the first “First Aid” emergency organization in the nation. Its goal was to teach first aid, especially in relation to reviving drowning victims and those who fell through the ice. Benjamin Franklin even proposed mouth-to-mouth resuscitation as first aid to such victims.

When the Humane Society of Philadelphia ceased operating, its responsibilities were take over by the Skaters Club of the City and County of Philadelphia. This group was founded on December 21, 1849, by a number of men who enjoyed skating on the Philadelphia’s frozen rivers and lakes. The club’s objectives were “instruction and improvement” in the art of skating, cultivation of a friendly feeling in all who participated in the amusement of skating, and efficient use of proper apparatus for the rescue of persons breaking through river or lake ice. Club members were required to wear the club badge and to carry a reel of twine that could be thrown to skaters in distress.

On February 28, 1861, the Skaters Club of Philadelphia became the Philadelphia Skating Club and Humane Society. As a comment (below) indicates, its boathouse–now owned by the Philadelphia Girls Rowing Club–was built in 1861 and is the oldest house on Boathouse Row. Furthest from the Art Museum, it’s one of the oldest continually-occupied recreational facilities in the country. The Girls Rowing Club is trying to raise funds to preserve this historic boathouse. Meanwhile, the rink and headquarters of the Skaters Club have been in Ardmore, Pennsylvania, since 1938.

The need for such a “first aid” humanitarian club was evident due to the number of cold-weather drowning deaths that occurred on Philadelphia’s rivers. Annalist John Watson wrote that people would skate on the iced-over Delaware River during the many times it froze in the eighteenth and nineteenth centuries. They would set out from the Vine Street Landing and other places that offered easy access to the river. Watson describes the scene vividly: On days the Delaware was frozen, booths were put up to sell refreshments to the gathered crowd of skaters and people-watchers. Sometimes an ox roast would add to the excitement. 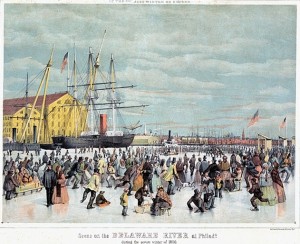 Ice skating on the frozen Delaware in the winter of 1856, near the first Philadelphia Naval Yard. An image of one of several instances of such a scene in the 1800s | via Library of Congress

Horses were also specially shod for racing sleighs on the solid river; the course would go miles upstream. The Delaware ice could get so thick—often more than two feet—that horses pulled loaded ferryboats across the channel atop the ice. (It’s no wonder that the world’s first icebreaker was built for Philadelphia in 1837 to keep traffic moving on the Delaware during winter months.)

The Schuylkill River also froze solid with great regularity in the eighteenth and nineteenth centuries. The river froze to a depth of six inches at Valley Forge during the Revolutionary War and a 1877 issue of the Friends’ Intelligencer noted that “Above Manayunk (this city) the Schuylkill froze solidly across before morning, but not to a depth thick enough to bear skating.”

Both the Schuylkill and the Delaware froze in 1821 (and several other times afterwards), such that Philadelphia’s commercial activity came to a standstill. But as a result of industrial activity, the two rivers became tremendously polluted by the twentieth century. Upstream manufactories had corrupted the rivers to the point that paint would peel off the hulls of ships and longshoremen became ill from the smell of hydrogen sulfide.

The many ponds and lakes spread throughout Philadelphia County’s backwoods avoided this fate. One pond in Northern Liberties, at the modern-day intersection of Fourth and Green Streets, was probably the best known for ice skating purposes. It was located along the Old York Road in that vicinity, so many people must have gone there to both skate and people-watch. But in 1813-14, local Quakers put up a substantial meetinghouse in the site of the pond and named it the Green Street Monthly Meeting of Friends. Many events that led to the Hicksite-Orthodox Separation of 1827 happened there. Today, there is no trace of pond or meetinghouse at that very commercial—and rather unappealing—location.

This past winter, the Piazza in Northern Liberties hosted a state of the art ice skating rink. The outdoor rink covered some 5,000 square feet of the plaza, thus continuing, in grand style, Northern Liberties’ skating heritage (and adding to the Piazza’s many people-watching activities). Skating will continue through February 23, and the Sochi Olympics will be shown on the big screen during skating hours. (More info HERE.) 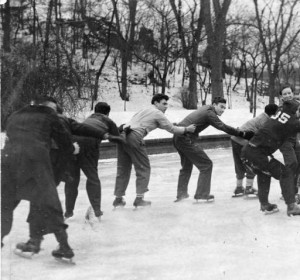 Ice skating was common on Gustine Lake during the early to mid decades of the twentieth century. The artificial lake was situated at the northern tip of East Fairmount Park, just north of the Queen Lane pumping station. This was a place where Grace Kelly and members of her family often skated during winters. Used for recreational swimming in the summertime, Gustine Lake was converted into a swimming pool in the 1958, and was shut down in the 1980s.

Furthermore, people skated on the Wissahickon Creek in the 1950s and on the Hunting Park pond in the 1970s. These places apparently froze over years ago on a regular basis.

Formal ice skating rinks have been built in the city since the nineteenth century. One was at Reyburn Plaza for a brief time before the Municipal Services Building came to be in the 1960s. The open space between City Hall and Arch Street was constructed around 1915 as part of the Benjamin Franklin Parkway project. In the 1950s, the Department of Recreation placed a temporary ice skating rink at Reyburn Plaza for $6,000. The MSB and its new plaza replaced Reyburn Plaza (and its modest rink) in 1962-63. 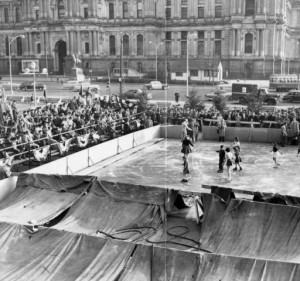 The Wissahickon Skating Club is a private skating club organized for the purpose of supporting and developing amateur athletes for national and international competition in figure skating and ice hockey. The club was founded in the early 1950s by a group of prominent Chestnut Hill families who felt that an ice skating facility should be a part of their community. The Wissahickon Skating Club, which opened in October of 1956, is one of only seven or eight skating clubs in the nation to own its own facility.

The Ice Rink at the Class of 1923 Arena on the University of Pennsylvania campus has been home to collegiate ice hockey and hosts skating events, parties, and other public activities. Made primarily of poured concrete, this 60,000 square foot arena along Walnut Street is supported by four twenty-two foot concrete columns around the exterior of the building. Designed by Robert C. McMillian Associates, this arena was founded in 1968 when a group called the “Friends of Pennsylvania Hockey” and the Penn Class of 1923 decided to donate the $3.2 million facility to the University. Upon its completion in 1972, the 2,900-seat arena complemented the Palestra as the crown jewels of Penn’s athletic department.

Then there’s the memorable scene in the original Rocky where Adrian and Rocky went ice skating on their first sort-of date. As you may recall, Rocky bribed the rink’s janitor to allow the two to skate in the deserted rink after closing hours. This scene helped endear Rocky in the minds of moviegoers around the world. It’s too bad that the actual ice skating rink used in the film was in Santa Monica, California. 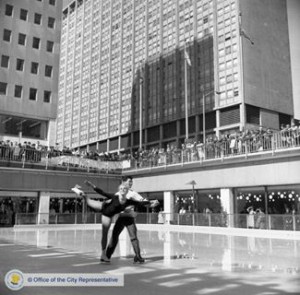 Above all, many Philadelphians recall the sunken ice skating venue at 1616 Pennsylvania Boulevard (now JFK Boulevard). The Penn Center Skating Rink was a human element of the Penn Center development plan that city planner Edmund Bacon proposed and which the developer actually implemented. It was also an attempt to emulate aspects of New York’s Rockefeller Center. Passersby could watch skaters by looking over or through an open grille railing facing the outdoor rink, which was located below street level. The rink also served as a shaft that brought daylight down into the underground concourse in that locale.

Architect Vincent G. Kling designed the rink and was probably there for its formal midnight opening on December 31, 1958. A Stouffers restaurant adjacent to the rink provided hot chocolate to the young and old who may have taken a commuter train into town from the suburbs to skate or people-watch. Between October and May, the rink was replaced by outdoor dining.

Unfortunately, the Penn Center Rink was sparsely used and was overshadowed rather than washed by sunlight, as planned. Plus, it impeded the development of the Penn Center office complex. The rink was eventually replaced by 8 Penn Center in the late 1970s, having long been considered a failure.

Given how ice skating has been such a popular repast in this city, is it any surprise that Tara Lipinski, who won a gold medal at the U.S. Olympic Festival (the junior level competition) in 1994 and became the youngest to win an individual gold medal at the 1998 in Olympic Games, was born in Philadelphia?

The effort to transform Philadelphia’s Dilworth Plaza has been in the works since 2006. The Center City District and Central Philadelphia Development Corporation felt that the former public space, with its concrete landscape, made the space uninviting and difficult to navigate. It could be said that Dilworth Plaza’s ice skating rink is a modern version of Edmund Bacon’s above-referenced idea for a downtown place where people could enjoy themselves.

Dilworth Plaza was constructed in the 1970s, taking up an area that had once been the site of the headhouse of Broad Street Station, as well as a portion of Broad Street that previously looped around City Hall.

Today, the Blue Cross RiverRink at Penn’s Landing is a grand holdout of Philadelphia’s ice skating tradition. This past winter, the RiverRink celebrated twenty years as Philadelphia’s only outdoor, Olympic-sized, public ice rink—and people-watching site. The RiverRink hosts parties, private functions, special events, and offers public skating sessions and skate rentals. The site was decked out in a “Winterfest” motif in December, featuring indoor/outdoor dining, a light show, and a group of craft shops housed in container crates. Skating and other events there will go on until March 2nd. (More info and tickets HERE.)

Located immediately next to the Delaware River, the RiverRink is reminiscent of the era when ice skaters twirled atop the frozen river. Only an ox roast is ever missing.