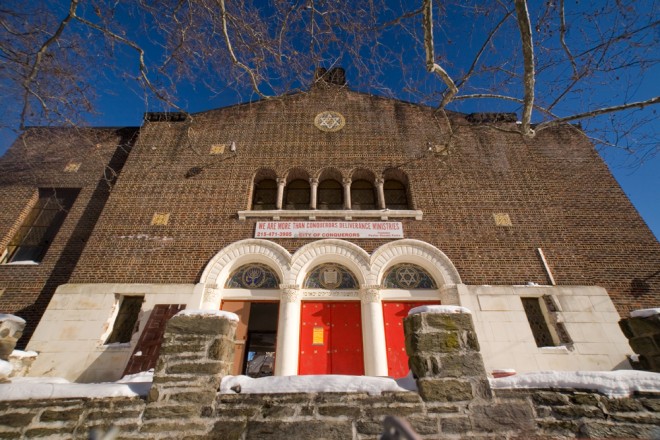 In Fishtown and Kensington, a ton of construction is putting a new face on life under the Market Frankford Line. Under the el in West Philly, demolition takes it down. With a couple smaller buildings under the 63rd Street station on Market Street already gone, demolition work is currently taking down the West Philadelphia Jewish Community Center (WPJCC) at 11 Cobbs Creek Parkway (formerly called South 63rd Street). 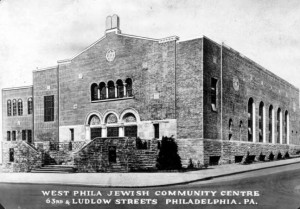 According to Allen Meyers’ The Jewish Community of West Philadelphia (Acadia Publishing, 2001), the WPJCC formed in the early 1920s, and the building followed other synagogue center models, “with space for athletic(s) in addition to social and religious programs.” Architects Edwin Silverman and Andrew Sauer teamed for the design of the Richardsonian Romanesque building, across the street from Cobbs Creek Park.

Silverman, who had previously worked for Horace Trumbauer and Hoffman-Henon, later partnered with Abraham Levy to form the Silverman & Levy firm (active 1925-49), according to PAB. Sauer, whose work primarily consisted of school and club designs, won a 1905 T-Square Club award for his concept of a “Recreation Park & Pier on the Delaware River Front”–a century-old forerunner to the park piers at Race Street and Washington Avenue–proposed for a pier at Johnston Street between what is now Oregon Avenue and the Walt Whitman Bridge. 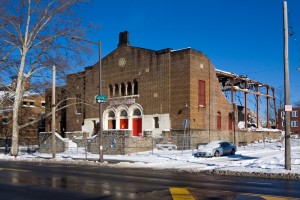 At the time of its construction, the $300,000 WPJCC was the most expensive synagogue structure ever built in West Philadelphia. Construction began in 1926, and the building was formally dedicated in 1927. A medal commemorated the dedication with an engraving of the building on one side and “a center for all Jewish activities, dedicated June 12-19, 1927 / Sivan 12-19, 5687” on the other. 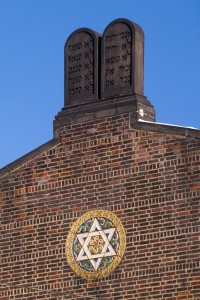 The Ten Commandments and the Star of David mark the entrance of the WPJCC, currently being demolished | Photo: Bradley Maule

Most recently, the WPJCC facility was home to We Are More Than Conquerors Deliverance Ministries, a small church whose sign still adorns the façade, in between ornate decorations of Jewish iconography: Star of David, Torah scroll, menorah, and Hebrew script; the building is crowned by two tablets bearing the Ten Commandments.

In November 2010, King of Prussia-based Philadelphia Suburban Development Corporation (PSDC) purchased the WPJCC for $450,000, only $150,000 more than the building’s original actual cost (i.e. it doesn’t take inflation into account). A 2011 plan was presented to the Zoning Board of Appeals to install a “private and public penal institute” and later withdrawn.

A permit was pulled on November 20, 2013 for the complete demolition of the structure; that permit was modified two weeks ago, on January 9th. The property is listed on PSDC’s web site and includes three-year-old site plans of the building currently under demolition, but it makes no mention of plans for the site after the WPJCC is cleared.

Multiple attempts by this writer and Hidden City Daily staff writer Christopher Mote to reach PSDC for more information on their plans after the completion of the WPJCC demolition were unreturned.