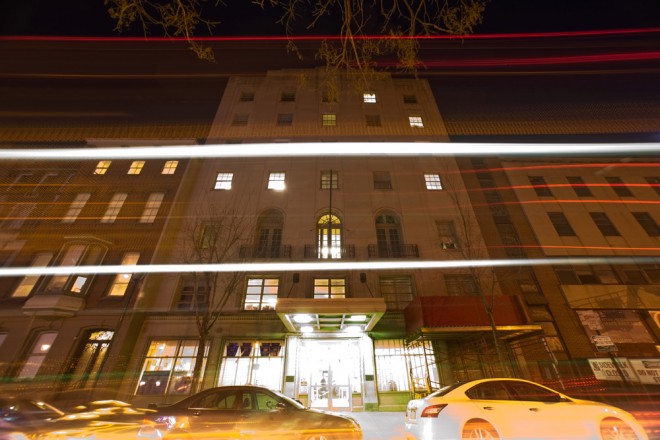 On the 2000 block of Chestnut Street, the seven-story Freire Charter School occupies has towered over its much shorter neighbors for 91 years. But next door at 2021 Chestnut, a four-story mid-century building is being cleared for a new 12-story residential tower. With its reign over the block about to end, the time is right to honor this under-appreciated, limestone-clad beauty. 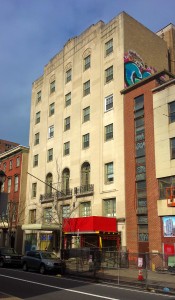 The origins of this building lie with a social club known as the Girard Craftsman’s Club of Philadelphia, one of many Masonic Clubs active in the city at the time. Masonic Clubs are social clubs made up of master freemasons, often with a particular professional field or special interest in common. But alcohol is prohibited at Masonic Lodges and Temples, so masons would form these types of clubs in order to, ahem, get their drink on. The Girard Craftman’s Club was founded for this purpose at the start of the 20th Century and, like many others, expanded exponentially with the advent of Prohibition in 1920.

In 1923, the Girard Craftsman’s Club had grown so large in the three years since Prohibition began that enough dues were collected to purchase the old New Wellesley School at 2027 Chestnut Street, which lived its final days as a fleabag hotel called the Roosevelt. Plans came together to create a new luxurious $1 million hotel for this location, catering to freemasons visiting Philadelphia. At the time, a cold war of sorts existed between masons in different American cities, each vying to build the first mason-only hotel. While the Level Club in New York City began construction on theirs a year earlier, the Girard Craftsman’s Club set the goal of opening their hotel first.

With a design from architect and club member Clyde Smith Adams in hand, the cornerstone was laid in a full dress Masonic ritual presided over by Abraham Beitler, former Grand Master of Masons in Pennsylvania, before the year was out. Construction wrapped up in less than six months and the new Girard Craftman’s Club opened on April 1, 1924, achieving the goal of first Masonic Hotel in the world.

Though designed and constructed as quickly as possible, no expense or luxury was spared. The seven-story building (eight including the basement) featured an 1100-seat auditorium called Roosevelt Hall, two 225-seat auditoriums called Washington Hall and Stephen Girard Hall, a grand ballroom capable of seating 400, 104 hotel rooms, a billiards room, a library, a bowling alley, and its own Mason-themed Museum.

Sounds great, right? Well, it didn’t work out. The hotel was a complete failure, leading the Girard Craftsman’s Club to take out a second, then third mortgage. In only three years, they gave up and sold the building. The deal they made with the new owner ended up in court, a case known as Dietz v. Girard Craftsman’s Club of Philadelphia (9 Pa. D. & C. 805, 1927).

The luxurious space then spent the next two decades as an opulent hotel and event space. Weddings, dances, banquets, political rallies, even sporting events took place in the hotel’s grand ballroom. Everything from communists to klansmen, birdwatching enthusiasts to the Italian-American Philharmonic Orchestra made use of the space. The success of the hotel led to an interior renovation and upgrade designed by the firm of Simon & Simon in 1932. When Prohibition was repealed in 1933, one of the city’s fanciest nightclubs, Club Seville, opened on the first floor. A bright neon sign was added to the roof.

A decline in the neighborhood after World War II led to the Stephen Girard Hotel’s sale to the Metropolitan YWCA in 1949. The Y overhauled the now-outdated structure, converting the grand ballroom into a gymnasium and the old auditoriums into exercise spaces and classrooms. The old hotel rooms became lodging of women. In 1954, a $750,000 annex was built next door that was both architecturally and socially lauded in its own time. 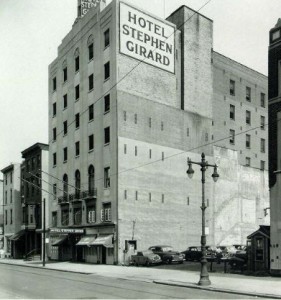 1949, in its last days as the Stephen Girard | Source: James E. Dillion Collection of the Athenaeum of Philadelphia

The Mid-City YWCA, as it came to be called, flourished at this location for the next 4 decades with major upgrades in 1978 and 1984. Due to financial problems, the YWCA and Annex closed on August 31, 1990 and were put up for sale. After nearly three years sitting empty and still unsold, the city’s Redevelopment Authority purchased the site on May 5th, 1993 for $1,101,143. At this point, the board of the Mid-City YWCA had reformed as the Young Women’s Community Center (YWCC) with the intention of reopening the buildings as 60 units of transitional housing for homeless women and their children after a $6 million upgrade. 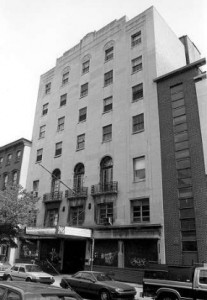 The YWCC plans fell through and the old Girard Craftman’s Club sat blighted and unused. In 1999, Freire Charter School, one of the first charter schools to open in Philadelphia, leased the building and converted it into a state-of-the-art educational facility. Freire’s 21st Century occupancy brings 2027 Chestnut Street full circle back to its late-19th Century use as a school.

A wrecking ball is currently taking down the YWCA Annex next door, in favor of a new 12-story apartment building. The new tower will supplant the Freire Charter School’s status of Dominator of the Block end after more than nine decades.

But look south from the 2000 block of Market Street, and you’ll see a ghost sign recalling the building’s history as the Hotel Stephen Girard.