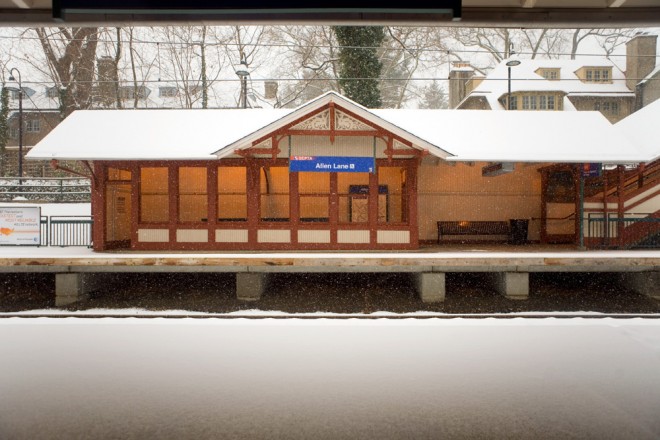 He owned and sold slaves, he hated Ben Franklin, and he didn’t want America to declare independence, so he rode out the Revolution in England. And yet, he left us with an icon of American independence, a Philadelphia neighborhood, and a city Billy Joel sang about because it had a better cadence than Bethlehem.

William Allen was a lot of things to a lot of people in colonial Philadelphia. The son of merchant William Allen, Sr., he built on the wealth established by his father, a friend of William Penn’s. The younger Allen contributed to the founding of Pennsylvania Hospital and what would become the University of Pennsylvania; he was the 26th Mayor of Philadelphia (1735–36) and Chief Justice of the Province of Pennsylvania from 1751 to 1774.

He married the daughter of Andrew Hamilton, the Philadelphia lawyer who with Edmund Woolley is credited for the design of Independence Hall—which Allen helped Hamilton finance by buying properties for the purpose of building a Pennsylvania State House. His own daughter married Penn’s grandson John, whose uncle Thomas (William’s son) sold Allen’s business partner a 5,000 acre plot north of Philadelphia along the Lehigh River. Allen bought it and laid out ‘Northampton Town’, which officially became Allentown in 1838 after decades of colloquial use. (Allen’s son John built Trout Hall as a summer retreat in 1770, and it stands today as the oldest building in Allentown.)

While the State House was rising on Chestnut Street, Allen built his own 47-acre estate eight miles northwest in Germantown. Completed in 1750, Allen’s home Mount Airy would leave its handle on the neighborhood long after its short life. James Gowen, for whom neighboring Gowen Avenue is named, demolished Mount Airy in 1848 and built Magnolia Villa. The latter in turn went through a number of uses, including the American Classical and Military Lyceum, where future general George Meade and rear admiral Samuel Du Pont were counted among its students. 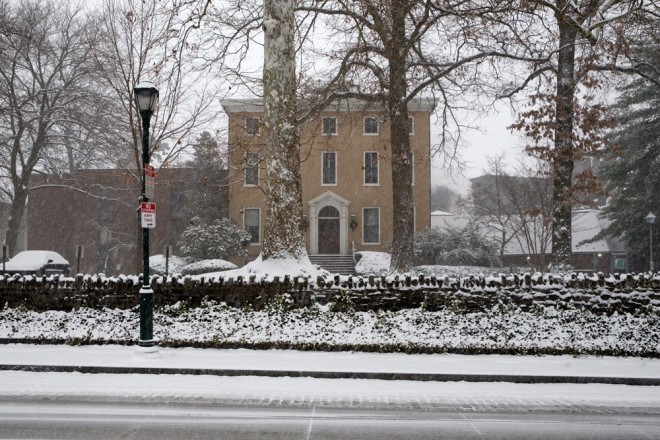 The Lutheran Theological Seminary, where Mount Airy got its name 264 years ago | Photo: Bradley Maule 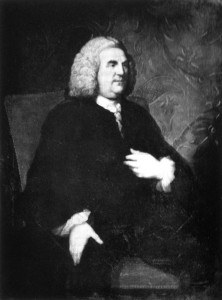 In 1760, William Allen sponsored young artist—and fellow Loyalist—Benjamin West’s trip to Florence and Rome, where he would study the ‘science’ of painting; West later painted this portrait of Allen | Image used with permission of Germantown Historical Society

The Lutheran Theological Seminary at Philadelphia now occupies the site, where a bronze tablet claims the first shots of the Battle of Germantown were fired in October 1777. That’s especially interesting considering Allen was a steadfast Loyalist, and the ensuing victory gave the British Army control of Philadelphia, capital of the young United States, ultimately leading to the Continental Army’s retreat to Valley Forge. Allen’s Loyalist views eventually clashed with his independence-minded former friend Franklin, whose stature he helped to elevate as a printer, clerk, and Postmaster General. Of Franklin, Allen wrote to Thomas Penn in 1764:

“I must assure you he that he has been for many years and still is the chief author and grand abettor of all the seditious practices in the government and is continually infusing into the people’s ears his Republican Anarchial Notions, being a printer he has frequently published the most virulent pamphlets against government, among the rest you no doubt have seen that which he calls your epitaph, he is a very artful man and can color the worst designs with very specious glasses.” (From William Allen: Founder of Allentown, Colonial Jurist, Industrialist, and Loyalist, from Volume 24 of the proceedings of the Lehigh County Historical Society, Allentown, PA (1962); courtesy of Germantown Historical Society.)

Needless to say, with the winds of change blowing (so often fanned by Franklin himself), Allen resigned as Chief Justice in 1774 due to his Loyalist tendencies and advancing age. He went to London, where he published The American Crisis: A Letter, Addressed by Permission of the Earl Gower, Lord President of the Council, on the present alarming Disturbances in the Colonies. He stayed there until 1779, when he returned to Philadelphia. He died the following year at his Mount Airy estate.

A Pennsylvania historical marker and pedestrian plaza were dedicated in 2009 at the corner of Germantown Avenue and the street bearing his name, Allens Lane. Or is it Allen’s Lane? Allen Lane? 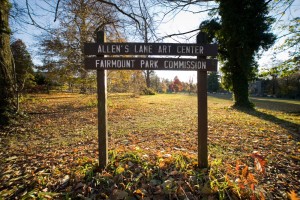 The Fairmount Park Commission liked to issue credit where it was due: the lane was Allen’s | Photo: Bradley Maule 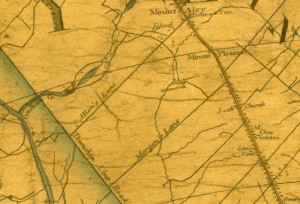 According to street signs and the Streets Department, the road which dates back to 1746, running from Germantown Avenue down to the Livezey Mill on Wissahickon Creek, is Allens Lane. According to SEPTA and an apartment building referencing the station a block away, it’s Allen Lane. And according to Philadelphia Parks & Recreation, as well as some of the oldest maps of the area, it’s Allen’s Lane.

As a lifelong neighborhood resident and an archivist at both Germantown and Chestnut Hill Historical Societies, historian Alex Bartlett knows his Mount Airy. “I grew up, and have lived almost my entire life, in fact, a block away from the Allen Lane station,” he says of the stop on the Chestnut Hill West regional rail line. The Pennsylvania Railroad subsidiary Philadelphia, Germantown and Chestnut Hill Railroad opened the line to Chestnut Hill in 1884. “I have always heard that the ‘s’ was left off of a sign by an early sign painter for the Pennsylvania Railroad… [but] I have never heard of any source confirming or disproving this story.”

Attempting to confirm or disprove the story, I turned to SEPTA’s former Manager of Rail Planning Harry Garforth, now Amtrak’s Principal Officer of Northeast Corridor Planning. “There are several timetables listed in this booklet [about the Chestnut Hill West line, published by the PRR Technical and Historical Society] and a short description of each station. The station name used in the description is Allen Lane,” he explains. “Interestingly, there is a copy of an 1884 timetable, the year the branch opened, which lists the station as Allen Lane, then another in 1895 showing Allen’s Lane. Every other reference to the passenger station, block station, electrical substation (built 1918), and freight service uses Allen Lane (no ‘s’).”

By the way, that 1884 timetable? For its production, PRR used their regular printers: Allen, Lane & Scott Railroad & Mercantile Printing House. 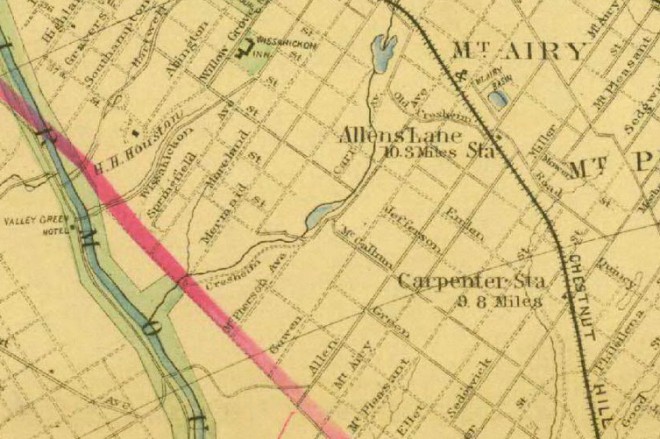 Detail of Baist’s Map of Philadelphia and Environs, 1889 | Accessed via PhilaGeoHistory.org

Al Giannantonio, longtime president of the Philadelphia Chapter of the PRR Technical and Historical Society, offers similar, inconclusive evidence. “The 1910 G. W. Bromley Atlas shows the street name after which the station was named as Allens Lane, as do most other maps of the area,” he says, checking his resources. “The station in both the PRR CT 1000 (a form listing all stations and instructions) and in the four-volume history of the PRR prepared by Coverdale & Colpitts show the station name as Allen Lane. Yet strangely, Baist’s Map of Philadelphia and Environs (1889, above) shows the street as Allen Lane and the station as Allens Station. “I would tend to believe that a sign painter could have left off the ‘s’ and it took for the duration of history,” Giannantonio surmises. “The historical records of the PRR lean toward Allen Lane Station, so that is the way it probably should stay for any new signs (and schedules) produced.”

Coincidentally, SEPTA is in the process of producing new signs. Signage upgrades are part of an overall station improvement project in SEPTA’s Capital Budget. However, as SEPTA’s Senior Long Range Planner Jennifer Barr indicates, “the name of the [Allen Lane] station has never really been a topic, so there is no motive or to plan rename or revise the station’s name.” 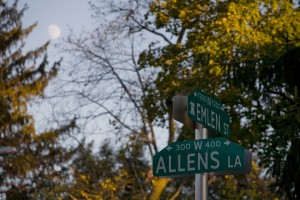 That’s just fine with historian Bartlett, the Mount Airy lifer. “I see [the street name] referred to with and without the apostrophe; however, it is never referred to as ‘Allen Lane’.” Still, he says, “long-timers like myself would probably rather see the SEPTA sign left alone.”

Allens, Allen’s, Allen. Grays Ferry or Gray’s Ferry? Penns Landing or Penn’s Landing? Something so ordinary as a pesky apostrophe can complicate even the most basic level of planning. Shame it’s not as simple as Mount Airy. Or is it Mt. Airy?

A final aside on William Allen, especially for Penn State fans: Allen Street, the primary cross street between Beaver and College Avenues, leading directly to PSU’s Old Main, is also named for William Allen: the second president of the University, 1864-66, William Henry Allen—no relation to the justice Allen.