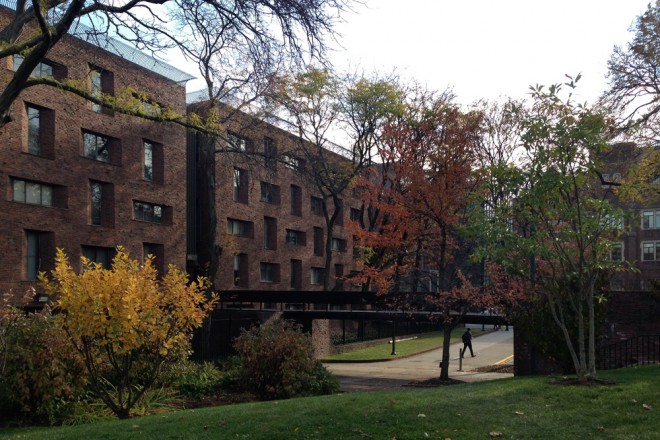 University campuses have a long history of shaping the landscape where they reside, particularly when the campus maintains an urban context. Universities tend to bring with them new architectural styles, construction, and urban growth. The development of higher education institutions have significantly formed Philadelphia’s own urban boundary and skyline. In West Philadelphia, for example, the purchase and subsequent move of the University of Pennsylvania’s campus from 9th and Market to the easternmost part of West Philadelphia in 1870 set the tone for the development of that neighborhood (now deemed University City). At that time, that part of West Philadelphia was considered a part of the suburbs. Drexel University soon followed suit, establishing its Main Building on the corner of 32nd and Chestnut Streets in 1891. The impact that these two institutions had on the area is not insignificant. The population of West Philadelphia grew from 13,265 in 1850, just before its consolidation with Philadelphia proper, to 330,286 people at its peak in 1950. Similarly, the founding of Temple University in 1884 had a significant impact on the way North Philadelphia, particularly with how the Broad Street corridor has developed—and is still developing. 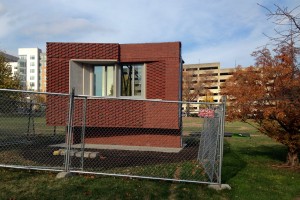 Of the various building models that universities have introduced to the city, student housing, particularly in recent years, has made a huge visible impact. In 2013 alone, high-rise student dorms opened at two of the three major universities; Drexel finished Chestnut Square dorm by the firm of Robert A.M. Stern and Temple University completed its Morgan Hall complex by MGA Partners. Now fully under construction, New College House is set to be the newest residence at University of Pennsylvania’s campus. Located on the corner of 33rd and Chestnut and designed by Bohlin Cywinski Jackson, the 198,000 sq ft undergraduate complex takes its cues from another Penn student housing complex, the Hill College House next door.

Eero Saarinen, the Finnish American architect widely recognized for his design of the Gateway Arch in St. Louis and Washington Dulles International Airport, crafted plans for Hill College House, Penn’s modernist women’s dormitory completed in 1960. But while its design comes from a top tier architect, Hill has had its share of criticism: small windows, lack of ventilation, a fortress-like aesthetic with its back turned to the street. Considering its original intent as a women’s dormitory, many of the criticisms stem from the architecture’s root in the social and cultural norms of the time—a spatial representation from a drastically different epoch, where the strict separation of men and women existed, especially in a college setting. Although women had enrolled in Penn classrooms since the late 19th century, residential makeup was still divided by gender, and men’s visits to women’s living spaces were highly controlled.

During the 1950s, an insurgence of female students enrolling in American universities necessitated an evolution of the college campus. With coed dorms still a ways off—Oberlin College built the first one in 1970—this influx triggered the construction of women’s dormitories across the country. Eero Saarinen won commissions to design three of these female dormitories; Emma Hartman Noyes House at Vassar College (1954), Hill College House at the University of Pennsylvania (1957), and Woodward Court at the University of Chicago (built 1958, demolished 2001). Although all three dorms shared architectural and cultural approach similarities, Hill College House’s designed was considered to be the most restrictive.

Initially housing 656 women, the inward facing design was attributed both to its inner city location and to the desire of creating a “sanctuary” for its residents. From the exterior, Hill House appears as a rectangular modernist castle sitting in the landscape; its entry bridge designed by Saarinen as a way to work with the topography of the site, but also suggests a playful drawbridge across a moat, working in concert with a spiked roof to keep men at bay. 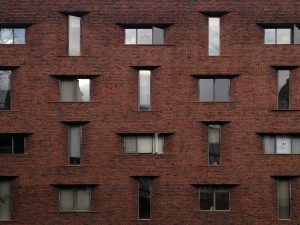 To Saarinen, it was important that a new building in an existing campus be “in harmony with the outdoor space and with existing buildings of other times.” In using brick, Saarinen wanted to create a link between his building and others on campus, particularly Frank Furness’ Fisher Fine Arts Library. He used clinker bricks, known as such for their irregular shape and dark colors that give texture and color variation to the façades. Though considered small in comparison to contemporary dorm windows, the tapered horizontal & vertical casement windows were meant to allow for ventilation and a range of views. At that time, the building was not air conditioned, something that remains unchanged, to the chagrin of current residents. In the 1960s, dorms rarely saw much use outside of the traditional academic year, so it was common for buildings of that era to only have heating. Currently, window units inset into the horizontal windows interrupt the façades of the building in order to accommodate a warmer climate. 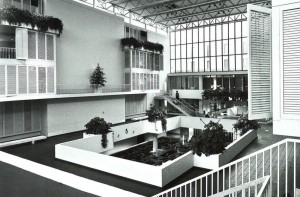 The blank, opposite wall now houses N.C. Wyeth’s An Apotheosis of Franklin | Original photo by Saarinen photographer Balthazar Korab, courtesy of the Library of Congress

Inside Hill’s heavy brick walls, its five-story, light-filled atrium tells a different tale. Student rooms and circulation spaces open onto the atrium, emphasizing a sense of community. Its white walls and wood shutters create a warm, stark contrast to the cold, dark brick of the exterior. And since 1978, it’s been the home of N.C. Wyeth’s An Apotheosis of Franklin, a mural commissioned in 1926 for Franklin Savings Bank of New York City.

The atrium also brings natural light to common spaces on lower levels such as the dining room and recreation room. All that open space has an interesting footnote: Saarinen originally intended it to be an open courtyard, but after reasoning that an outdoor space would see little use during most of the academic year, he enclosed it. Hidden from the street, one only discovers the spacious atrium upon entrance into the building.

Though sometimes more successfully than not, Hill College House has found ways to transcend its initial purposes and adapt to drastic changes in student lifestyles.