A New Year, A New Demolition In Pennsport 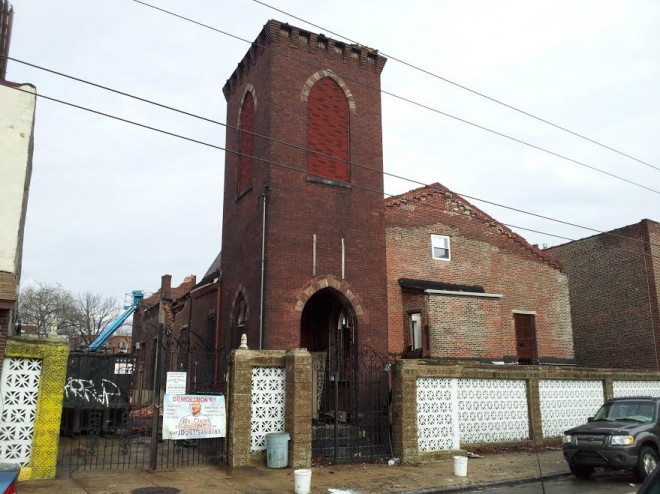 Demolition has begun on Greenwich Street Church, a former worship site and Sunday school for Presbyterians and later a temple for Buddhist monks, in Pennsport.

The modest building at 240 Greenwich Street is being cleared to make way for two single-family homes, a spokesperson for Landmark Architectural Design confirmed. Although the development has yet to be finalized, the church lot is over 11,000 square feet in size, which suggests homes that will have a larger-than-average footprint and/or make abundant use of the property’s open space.

No permits for new construction have been granted for the property. The owner on the deed, Leah Tartaglia, is a member of the Olivieri family of Pat’s King of Steaks fame, and the widow of Joe Tartaglia, whose family operates Connie’s Ric Rac, a performance venue on Ninth Street’s Italian Market. 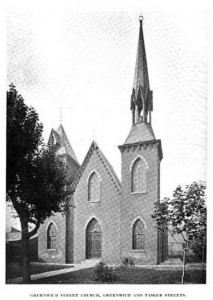 “Greenwich Street Church, Greenwich and Tasker” | Image from The Presbyterian Church in Philadelphia, 1895

The original chapel was erected in 1866 and initially used as a Sunday school by members of the Third Presbyterian Church (still active today as Old Pine Street Church in Society Hill). In December 1867, the chapel was organized for worship by the Fourth Presbytery of Philadelphia and became known as Greenwich Street Church.

The building was enlarged in 1880 and given its extant gothic façade. At one time, the western tower held a steeple that rose to 100 feet. The church property also boasted 200 feet of gardening space between Greenwich and Tasker Streets, as William P. White and William H. Scott observed in an 1895 survey of the city’s Presbyterian churches and institutions.

In 1987, the church was converted into Khmer Palelai Buddhist Temple to serve South Philadelphia’s burgeoning Cambodian population. Khmer Palelai vacated the property with the opening of its new monastery in Southwest Philadelphia, which it began building in 2011 after owning the land for a decade. Coincidentally, Landmark also drew up the designs for the temple that is under construction at the site at 58th Street and Lindbergh Boulevard.

Pennsport Civic Association did not receive nor require notification of the demolition, president James Moylan said in an email. “To my knowledge, the plan for this property requires no variances,” he said. “If that should change, the developer would be required to contact us. If no variances are required they can start work without any communication with the civic association.”