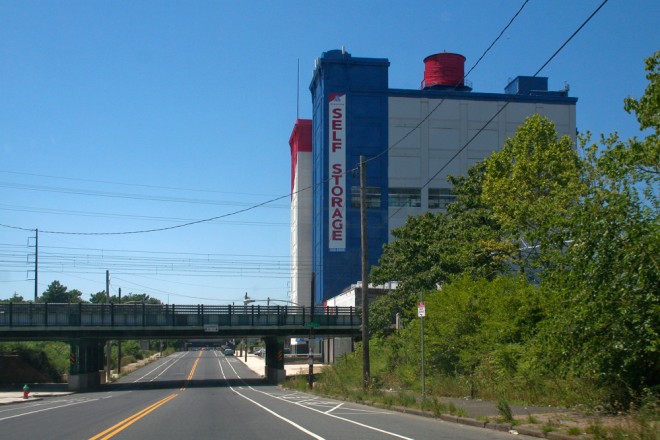 You can store whole buildings in here if you really wanted to | Photo: Bradley Maule

With all of its peers gone, the former Electric Storage Battery Company factory now demands passersby’s attention with its ostentatious color scheme. The heavily-altered, patriotically-painted building, now a Devon Self Storage, towers over its North Philadelphia neighborhood–visible from as far away as Center City–but was once just one of many factory buildings that stood near this location. 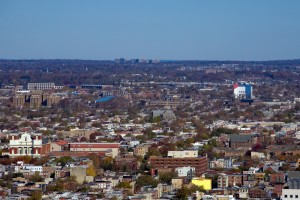 Ever been at City Hall’s observation deck and wonder what the red-white-&-blue building way up yonder is? Now you know | Photo: Bradley Maule

William Warren Gibbs, then vice president of the United Gas Improvement Company, started the Electric Storage Battery Company in 1888. Gibbs, a serial entrepreneur, saw the potential of electric power and had interest in jumping on the electric bandwagon. Having no knowledge about electric batteries himself, Gibbs acquired numerous small electric companies and purchased the patents of French inventor Clement Payen, hoping to create a commercial application for all this new electric battery technology. He then drew investments from some of the richest men in the country: P.A.B. Widener, W.L. Elkins, Anthony N. Brady, Thomas N. Ryan, and William C. Whitney, nearly all of whom wanted to develop electric trolleys and taxis.

Gibbs had no real interest in long-term work in any of the companies he started (which might explain why this once-wealthy man died penniless) and handed over operations to Whitney, a New York tycoon, by 1894. On December 4th of that year, Whitney acquired the rights, licenses, and patents of every other battery producer in the United States, making the Electric Storage Battery Company a monopoly until 1903, when some of those patents expired.

After that, the already rapidly-growing company expanded a break-neck speed. By 1900, the Electric Storage Battery Company’s “Chloride Accumulators” and their new series of “Exide” batteries powered everything from trolleys to submarines, making them the largest company of their kind in the country, with sales offices in nine cities. The company spent the next 15 years overwhelmed by work as Exide batteries became the standard for early electric cars, then evolved into the standard for starters of early automobiles. In 1913, the company’s factory at the Southwest corner of 19th and West Allegheny couldn’t keep up. They acquired the Warden Power Company Building across 19th Street (demolished 1998) and moved in. Before alterations and additions were even complete, a six-story factory was built on the same piece of property (demolished 2002). These new buildings, in addition to their factory in Camden, still weren’t enough.

In 1916, having just received a major contract from the U.S. military (who was a year away from entering World War I), the company’s new president, Herbert Lloyd, knew that the already-largest electric battery production space in the world would need to grow to accommodate the growth. The company acquired a 1.6 acre triangular piece of land bounded by West Allegheny Avenue, 19th Street, and the Reading Railroad tracks. The houses on this property were demolished and the 1800 block of West Hilton Street, which ran through the property, was eliminated.

The firm of William Steele & Sons was commissioned to design the new building. Originally planned at seven stories, the demand on the Electric Storage Battery Company was so great that once completed at the end of 1917, the building was now eight stories and over 200,000 square feet. Even after the new building was constructed, there was still not enough space. In 1919, a short addition was added to the new factory, filling in the rest of the triangular property at the Northwest corner of 19th and Allegheny (mostly demolished, some parts still stand). 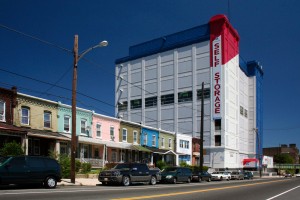 The Electric Storage Battery Company continued at their massive complex at 19th and Allegheny for the next few decades. In 1951, they moved out to Rising Sun and Adams Avenues, leaving their multiple buildings behind. The company still exists today as Exide Technologies, based in Milton, Georgia with locations all over the world, including a local office in Downingtown. The buildings south of Allegheny Avenue became home to the Remington-Rand Univac corporation, where they would develop ground-breaking technologies into the 1960s. The factory on the Northeast Corner became home to several clothing and hat companies, most notably W. Seitchik & Sons.

W. Seitchik & Sons, a men’s apparel company in operation since the 19th Century, came to purchase the building by 1956. From here, they produced and sold clothing for four decades. The company is still active today, with a small factory in Juniata Park and a showroom in New York City. Starting in 2001, telecommunications equipment was installed all over the building, making it a glorified cell tower until the old structure was purchased by the California-based Devon Self Storage chain and completely overhauled for that purpose by 2006, giving it the wacky appearance it has today.

The enormous All-American storage unit is all that remains of the Electric Storage Battery Company’s once massive 19th & Allegheny complex. Though more or less disfigured beyond belief, the building remains, not left to the same fate as its companions on the corner.